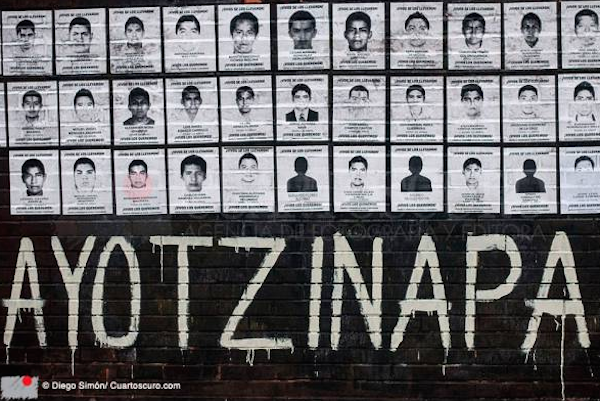 Ayotzinapa: They Were The Best And The Brightest

I honestly don’t know what to say about the disappearance of the 43 students from the Raúl Isidro Burgos Normal School.  Sin Embargo has an overview of the situation as of this morning, focusing on the investigation and the political aspects of the situation.  The foreign media, as expected, has seen this as somehow related to the narcotics export trade (which, of course, would not exist without the huge buyer’s market in the United States).  That the alleged head of the alleged gang that allegedly kidnapped the students allegedly committed suicide and that PAN is now demanding the PRD state government resign, while the Peña Nieto administration worries about the economic fallout from reportage on this, raise the kinds of questions that the historian in me wonders whether they even need to be asked at this time, or if they can only be addressed when there is more information.

And, what seems to be missing from all the discussion is any mention of who these students are, and what their disappearance (I have no doubt they’ve been murdered) means.  These kids were the best and the brightest of very poor families, most of them from indigenous communities.  It was a sacrifice on the parts of their families to even send their sons (and most were young men, though a few are women) to lose their labor while the students themselves lived in appalling conditions BY CHOICE.  There were not pampered college kids… these were young men and women on a mission.

We are told that these students were “radicals”, but radical only in the sense that educating the poor is a radical idea, and educating minorities is “radical”.  If the rural normal schools have a reputation for being on the political left, whose fault is that?  Who else have supported the schools, and who else is providing the material support (like books for their libraries, let alone food for their cafeteria)?  And, given the “support” given to rural people and the indigenous in this country, what would one expect?  When “education” is being re-defined as job training and not as a way of means of liberating one’s self, students are right to rebel.  And… in this political and social climate… to liberate one’s self, and to see one’s role in life as assisting others in their own liberation is a “radical” act, a defiance of the State and of the prevailing economic assumptions.

We are mislead when we see this tragedy as tied up with “DRUGS!”.  It may very well involve narcotics exporters in cahoots with the local estabishment, but I have long argued that the narco-trade is no different than any other exploitive agricultural enterprise… requiring what Aldous Huxley called “sweatable coloured labour” to provide the wants — not necessarily needs — of the planet’s priviliged.  That the local administration is the party usually considered the left (PRD) is only a matter of degrees without much meaning.  That these students are actually very conservative (simple “peasants” seeking to preserve their culture, but within the modern world) is lost when we see those posters of Che or Lenin or Emiliano Zapata.. but what other models are presented to them?  What neo-liberal — or social democratic — model would make room for their survival, or accept their way of life?  What has representative “democracy” given them?  I’d be tempted to torch a statehouse myself if my representatives were not just doing nothing (I’m used to the U.S. Congress), but actively working against my survival, and appeared to actively participate in the destruction of my family, my culture and the future.

There is a war in this country against the indigenous, and the campesinos.  Whether the fight is over water, or electrical power, or minerals, or narcotics, it has less to do with access to the product than with who stands in the way of “progress”, and what they are able to say or think about those who have access.  Those that teach, those that speak up, those that refuse to acquiese in their own destruction, are the ones being “disappeared” or murdered.

Who are the killers?  We are.