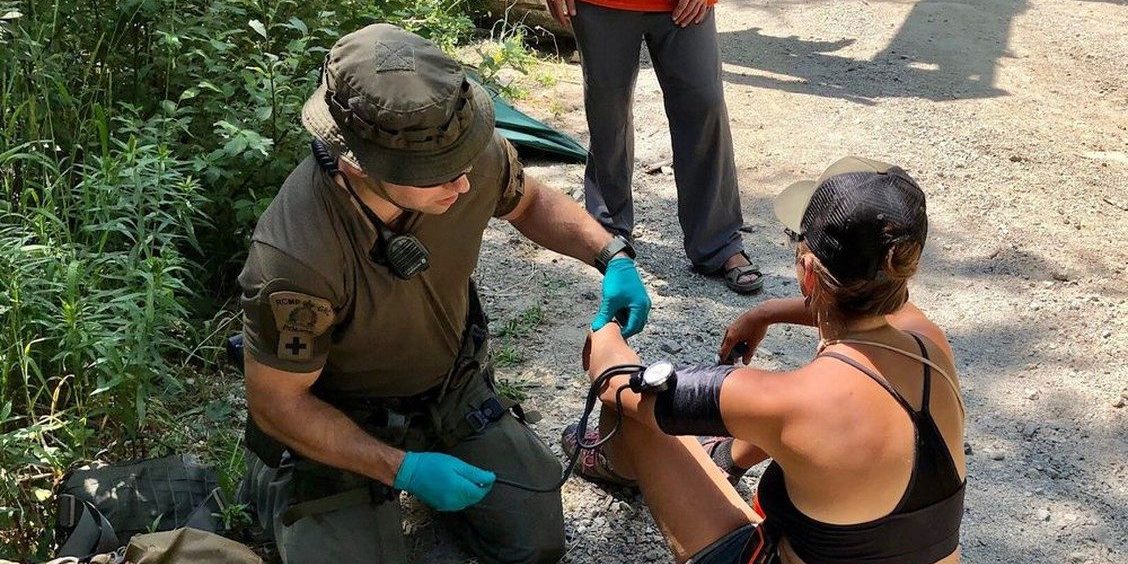 Above Photo: Police enforcement of the BC Supreme Court injunction order in the Fairy Creek Watershed area on July 13, 2021 in the area of Reid Mainline Road. BC RCMP.

Just hours before the ruling, Premier John Horgan rejected the idea of negotiating with protesters.

A B.C. Supreme Court judge has refused to extend an injunction that was granted to prevent protesters from impeding logging operations at Fairy Creek on Vancouver Island.

Justice Douglas Thompson ruled the reputation of the court outweighed the economic interests of the logging company, Teal Jones. Thompson pointed to the RCMP’s enforcement of the court injunction as the main reason for the court’s tarnished reputation.

“The methods of enforcement of the court’s order have led to serious and substantial infringement of civil liberties, including impairment of the freedom of the press to a marked degree,” wrote the judge.

One of the lawyers who argued against extending the injunction, Patrick Canning, said the ruling puts pressure on the province to resolve the ongoing dispute at Fairy Creek.

“Now the province has to come to the table with the Pacheedaht First Nation, with the company (Teal Jones), and with the protesters to talk about it. It’s time to come to a solution,” he said.

Just hours before the ruling, Premier John Horgan rejected the idea of negotiating with protesters. And Minister of Forests Katrine Conroy told Postmedia that transformative change is coming to the way logging is done in B.C.

“I am tabling legislation this fall in the legislature, and that will definitely be a sign of the direction we are moving in.”

Canning said the decision will be a game-changer for other protests.

“It’s a massive precedent because it has implications for TransMountain (pipeline) and other projects,” he said. “The court has clearly said that the balancing of interests in the test for an injunction is more nuanced than ‘Do you have a permit?’ The public interest has to be taken into account, and that is important.”

The 32-page decision concluded that although the logging company, Teal Jones, would suffer harm, the reputation of the court is paramount.

Thompson wrote that, “The factors weighing in favour of extension do not outweigh the public interest in protecting the court from the risk of further depreciation of its reputation. It is not just and equitable in all the circumstances of the case to make the order sought.”

Jackie Larkin, a member of the protest group “Elders for Ancient Trees,” said she cried tears of joy when she learned of the court decision.

“I am thrilled. I held out some hope that we might get some deserved relief from the courts. It’s a surprise for a lot of people who are activists. I hope it’s an expression in the way in which the world is changing.”

However, the judge said he did not have the authority to draw any conclusions about the argument that saving the planet is in the public interest.

“While a powerful case might be made for the protection of what remains of British Columbia’s old-growth temperate rainforests, and this issue is of considerable public interest and importance, the evidence marshalled to support this argument cannot be considered. With due respect for the forceful submissions I received to the contrary, I conclude that to take account of this type of public interest would amount to contempt of constitutional constraints on judicial powers. … Such considerations are not on the table.”

Instead, Thompson focused on police behaviour as the main reason for damage to the court’s reputation.

“The methods of enforcement of the court’s order have led to serious and substantial infringement of civil liberties. … And enforcement has been carried out by police officers rendered anonymous to the protesters, many of those police officers wearing ‘thin blue line’ badges. All of this has been done in the name of enforcing this court’s order, adding to the already substantial risk to the court’s reputation whenever an injunction pulls the court into this type of dispute between citizens and the government,” he wrote.

“I conclude that the court’s reputation has been depreciated by the manner in which the order has been enforced.”

The judge disagreed with lawyers for Teal Jones who argued anarchy would result if the injunction was not extended.

“I acknowledge the risk that the police may not seek criminal code charges or the Crown may exercise its discretion against charge approval. However, having regard to recent escalation of tension and obstructive behaviour, I think there is every chance that criminal law remedies will be employed.”

More than 1,000 people have been arrested for contempt of court since April. The B.C. Prosecution Service has decided it will proceed with 114 criminal contempt-of-court cases and is reviewing several hundred others.

“The B.C. Prosecutions Service will need to read this decision carefully and see if it undermines any of the charges, and decide where to go. Some charges might get dropped as a result of this decision.”

Although police can no longer arrest people for contempt of court, protesters could still be charged with obstruction or mischief under the criminal code.

Neither Teal Jones nor B.C.’s Attorney-General offered comment before publication. Thompson ordered that the injunction would expire at 4 p.m. on Tuesday.