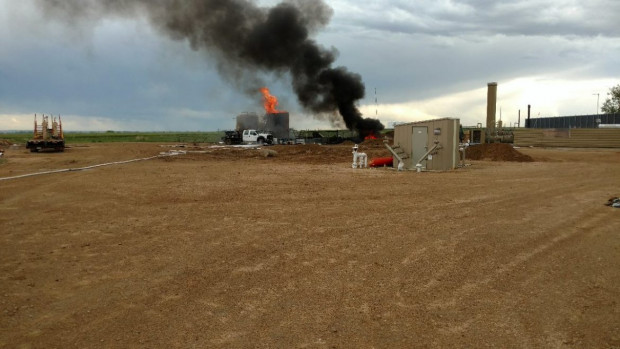 Above Photo: Mountain View Fire Rescue. An Anadarko oil tank battery went up in flames on Thursday, killing one worker and injuring three.

An Anadarko oil tank battery exploded in flames on Thursday afternoon, killing one worker and injuring three more, just 3.5 miles from the site of a deadly home explosion in Firestone, Colo., that killed two last month.

“We felt like a shaking and the dishes shook. I asked my son and he said, ‘Mommy I think it’s thunder.’ Then we walked out to our breezeway and saw smoke,” Tiffany Kampmann, a Firestone resident said of the oil tank explosion.

On the same day, state officials confirmed that two pockets of methane gas were discovered in the Oak Meadows community, in Firestone. Todd Hartman, spokesperson for the Colorado Department of Natural Resources (DNR) noted that the elevated readings on the left side of the image below were likely related to the existence of a tank battery and so not necessarily abnormal. The second pocket of gas was located underneath Oak Meadows Boulevard. According to the DNR, a preliminary investigation indicates that a flowline heading towards that road may have been cut when a sewer was installed there.

“I’m still not sure what the long-term impacts are gonna be to our neighborhood. I don’t think anybody has felt quote unquote safe since the events in April,” said Tiffany Kampmann’s husband, Chris Kampmann, who heard about the methane pockets during a community meeting with Anadarko this week.

Earlier this month, Governor John Hickenlooper ordered a statewide review of all oil and gas operations following the Firestone home explosion. The explosion was traced to an uncapped flowline from a newly activated gas well, both owned by Anadarko. The line was buried seven feet underground but was accidentally severed near the home’s basement. It leaked odorless gas that exploded, killing homeowner Mark Martinez and his brother-in-law Joey Irwin, both 42.

For years anti-oil and gas activists have been clamoring for greater distances between homes and oil and gas activity.  In 2013, Colorado increased setbacks for new wells to 500 feet.  But there are no statewide regulations regarding what is known as “reverse setbacks,” the distance that new homes must be built from older wells.

In a recent interview with Inside Energy, Colorado Governor John Hickenlooper expressed his own personal amazement, “that housing has come that close to wells and that wells have been drilled that close to housing.”

He said that he and state regulators would be looking closely at whether or not there should be a statewide authority to mandate new setbacks for new homes.  “We can’t just arbitrarily announce those decisions,” he explained, “but you certainly can accelerate that.” He said that regulators would be meeting with stakeholders over the summer to ensure, “we’ve done everything humanly possible to make sure this doesn’t happen again.”

A recent report by researchers at the Colorado School of Public Health found that, between 2006 and 2015, there were 116 fires and explosions related to energy development in Colorado.  Our own analysis of data from 2016 and 2017 found 20 more fires and explosions in those two years.

That same report from the Colorado School of Public Health noted that, nationwide between 2010 and 2014, fire and explosion incidents at oil and gas operations caused the deaths of 42 people and injured 87 more.

Leaks are also not uncommon. An Inside Energy analysis of Colorado Oil and Gas Conservation Commission spill data shows that over the past three years, there have been at least 1,652 spills related to oil and gas development in the state. At least 289 of them have been linked to flowlines.

Colorado’s front range population has exploded in recent years, an explosion that has.

As of April, there were 53,322 active oil and gas wells in Colorado, nearly half of which are in Weld County.

Politicians, activists and even regulators have warned about this growing problem. Back in 2014, Inside Energy’s Dan Boyce spoke with Matt Lepore, Director of the Colorado Oil and Gas Conservation Commission, about the intersection of drilling and suburban development:

“Part of what’s going on is that these cities and communities are expanding,” he said, “What once was just rural, agricultural land, subdivisions get developed. If today the local government chose to say no drilling in our residential zone, what about tomorrow when the residential zone has moved out to where drilling was okay?” Lepore said.

That’s exactly what’s happening. Inside Energy analysis finds that between 2010 and 2015, the number of people in Colorado who live in areas where there is at least one well per square kilometer has increased by 50,000.