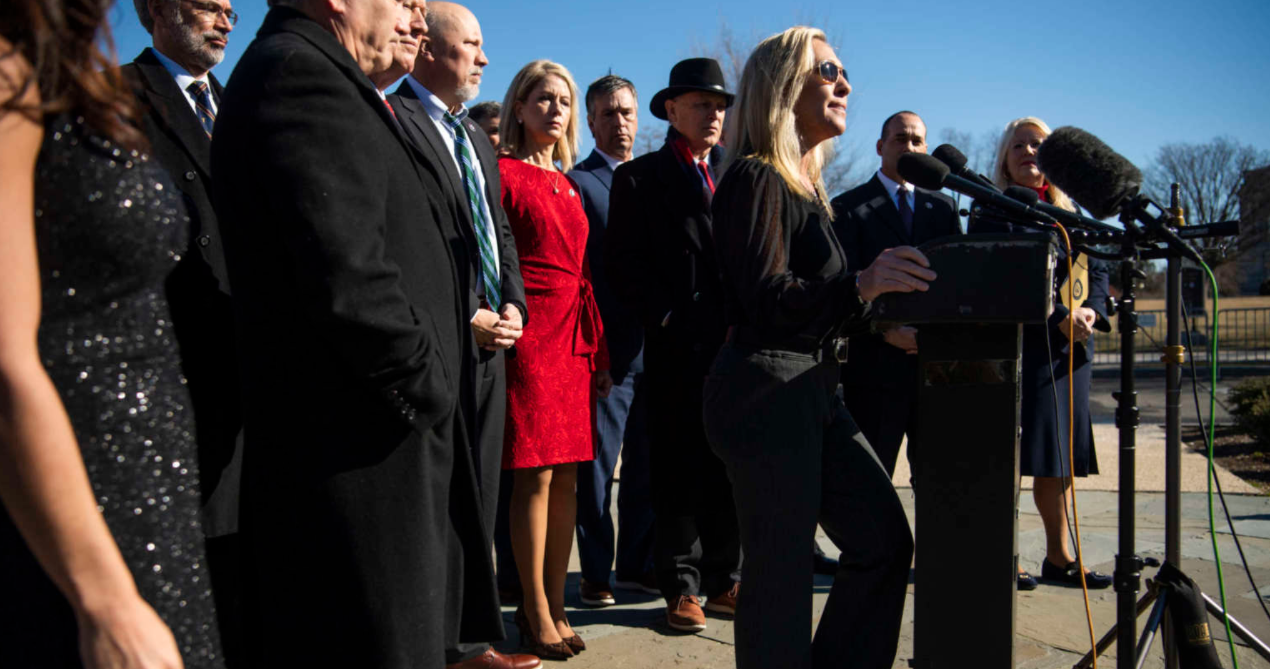 Above photo: Rep. Marjorie Taylor Greene and members of the House Freedom Caucus conduct a news conference outside the Capitol to oppose the Equality Act, which prohibits discrimination on the basis of sex, gender identity, and sexual orientation, on February 25, 2021. Tom Williams / CQ-Roll Call Inc via Getty Images.

The Equality Act — the landmark piece of LGBTQ legislation passed for a second time by the House of Representatives this week — faces near insurmountable odds to pass and become law as currently written. Support for it in the Senate is currently nowhere near the 60-vote threshold that would be needed to pass the bill with the filibuster. And though, if passed, the Equality Act, would codify critical and comprehensive updates to our federal civil rights laws, it’s reintroduction at this time is fueling a harmful backlash against transgender people as we contend with systematic governmental assaults on trans youth in state legislatures.

It has been incredibly moving to see our representatives in Congress speak out against anti-LGBTQ discrimination and defend trans lives in the face of cruel efforts to demean and dehumanize us. The bill’s passage through the House represents a set of political conditions that were unimaginable a decade ago. But at the same time, a vote on a bill that is unlikely to become law feels more performative than materially consequential. Politicians could tweet out platitudes and well-funded organizations sent out our fundraising e-mails and press releases but we are going to need a lot more to build a movement to defend our community.

There is a coordinated, well-funded and dangerous campaign working to criminalize trans youth, bar trans kids from sports, and ultimately eradicate transness. Though it cannot and will not succeed in eradicating trans people, the animating discourse and the policies that define this movement and which, are dangerously close to becoming law in many states, have and will continue to cause serious harm to trans youth.

While I listen to state legislative hearings day after day that seek to eradicate the well-being and survival opportunities for trans youth, I am unable to celebrate the current fanfare over the Equality Act, even as I hope for a future when the historic piece of legislation can become law.

I fear that so long as the Equality Act remains pending in Congress during these state legislative assaults, it is taking up critical financial and political resources at a time when trans people are fighting an all-out battle over our existence in over twenty states.

If signed into law, the Equality Act would fill important gaps in federal law that have left people without key legal protections for decades. Among other things, the proposed law would add explicit protections for LGBTQ people across federal law, add prohibitions on sex discrimination in public accommodations and expand the types of public accommodations that are covered under the law for everyone. With LGBTQ people — particularly Black, Latinx and Indigenous LGTBQ people — facing staggering rates of discrimination in all areas of life, the Equality Act would provide added recourse to potentially remedy and hopefully deter such discrimination. Additionally, expanded and explicit federal protections would empower federal executive agencies to promulgate more robust and protective regulations and policies in critical areas like access to shelter, health care and education.

But as important as these legal changes would be, passage of the bill as written remains a long shot. On Thursday, only three Republicans voted for the Act, down from eight when it previously passed the House in 2019. Support for the Equality Act in the Senate is nowhere near the 60-vote threshold that would be needed to pass the bill with the filibuster. And as has been widely reported, neither Sen. Joe Manchin (D-West Virginia) nor Sen. Kyrsten Sinema (D-Arizona) supports ending the filibuster. This means that even with the important House vote this week, there are many potentially insurmountable roadblocks in the way of the bill’s passage at this time.

The court’s decision in Bostock and the plain language of federal civil rights statutes as written, therefore already empower the Biden-Harris administration to promulgate regulations clarifying the range of protections that currently exist for LGBTQ people under federal law. That isn’t to say we don’t need the Equality Act — we do. But with robust protections in place and significant political obstacles in the way of the Act’s passage, it is important that we don’t overemphasize a political strategy that could lead to more backlash against the most vulnerable members of the LGBTQ community without transformative payoff.

And at best, formal equality is limited in whether and how it can change the material conditions under which LGBTQ people live. Federal civil rights laws have been successful at remedying discrimination to an extent but they are very much designed to maintain the status quo with many structural barriers in place to prevent transformative and redistributive justice.

For example, under our non-discrimination paradigm, litigants often must show that the discrimination was intentional, which is generally impossible. Courts have all but eviscerated disparate impact claims, making it difficult to get at the enduring forms of discrimination in the United States, which are often deliberate and structural but not explicitly written into law and policy as they once were.

In other words, there are significant limits to what formal civil rights protections can accomplish even at their best, and given the many challenges to passing an uncompromised version of the Equality Act, it is important that the shiny, flashy, spectacle of congressional action does not lure us away from the urgent, messy and life-threatening fights playing out at the state and local level. A yes vote on the Equality Act would not address the immediate needs of the trans young people in Alabama whose health care is about to become a felony, or the hundreds of trans youth across the country who may be barred from school sports, or the LGBTQ people who are profiled and arrested under criminal bans on sex work.

And the debate over the bill may, in fact, exacerbate the conditions under which many LGBTQ people live as we have seen with the escalating rhetoric about the “threat” trans people pose to others.

In light of the backlash and the political obstacles, we need politicians and organizations to put as much effort into fighting for trans lives in the states as pushing the Equality Act in Congress. What we saw this week just is not enough.