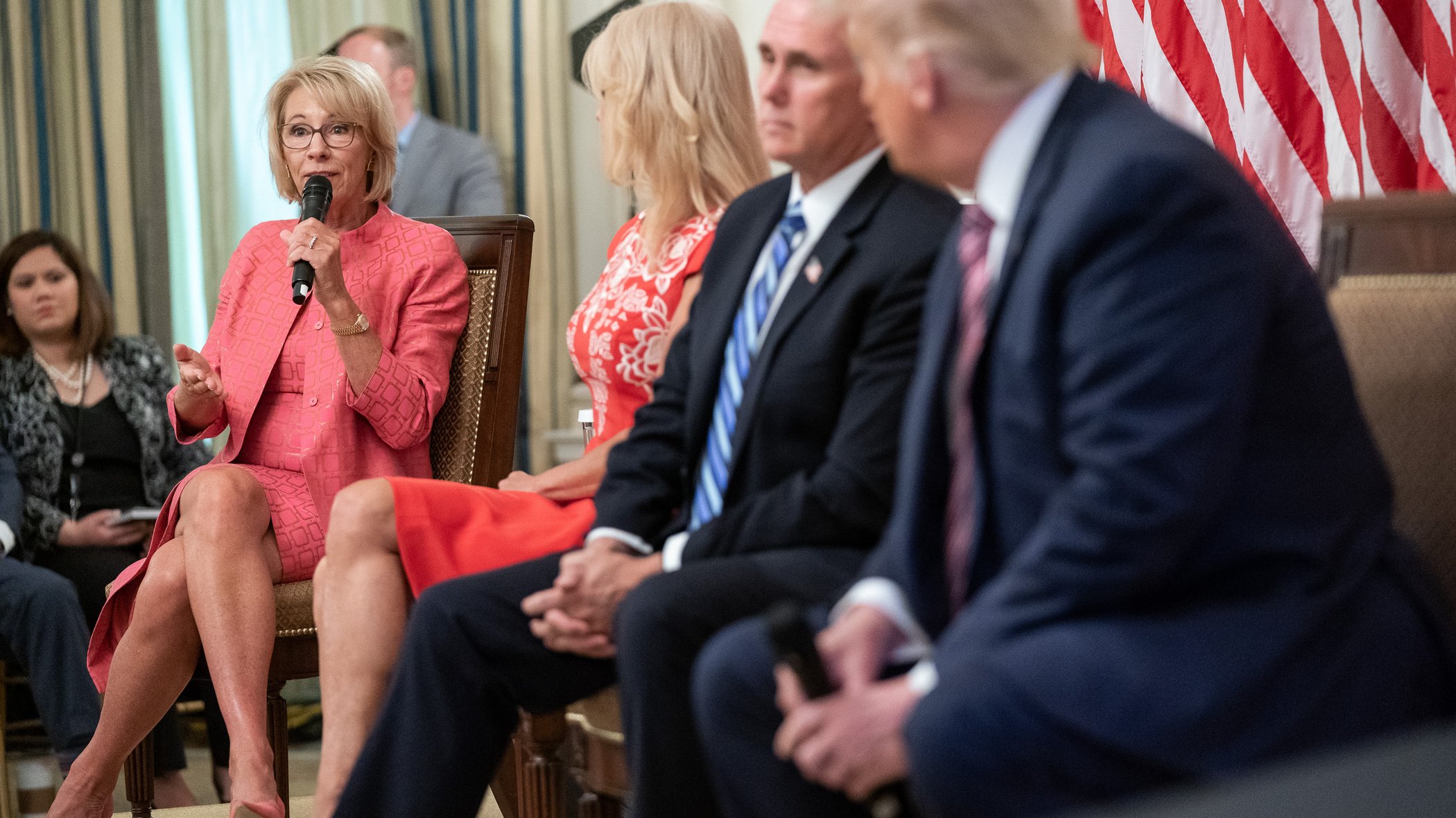 Bad Leadership Is Plunging Public Schools Into A Crisis

Above photo: President Donald Trump and Secretary of Education Betsy DeVos attend a roundtable on reopening schools at the White House on Aug. 12, 2020. Shealah Craighead, courtesy of Flickr.

COVID-19 exposed how important teachers are to students and families—it’s a shame that school leaders still won’t listen to them.

Michael Barbour, a professor at Touro University California and an expert on K-12 online learning, believes that more than half of the nation’s school superintendents “should be fired.”

His blistering criticism stems from the fact that, deep into the 2020-2021 school year, many schools are still struggling with virtual learning during the pandemic.

Stories of school districts’ online learning systems crashing are widespread. Teachers complain about not being included in decisions about online curriculum and pedagogy. Alarming numbers of students are not engaged or not showing up, especially in low-income areas and among communities of color.

The chaos is especially concerning given that 76 percent of parents say their children are attending school remotely, either full time or part time, according to a recent nationwide survey. Moreover, a majority of parents, 54 percent, think that improving online learning is more important than figuring out how to reopen schools for in-person instruction.

“Any school leader who didn’t reach out to teachers to ask what had worked well and what didn’t, and then use that [to prepare for the fall reopening], committed a dereliction of duty,” Barbour tells me, recalling the moment when schools closed suddenly in spring 2020. “After all, we knew this was a pandemic . . . not a one-time thing.”

Barbour’s ire might be justified. According to a survey of California school superintendents conducted by EdSource, less than 10 percent of school districts in that state offered more than sixteen hours of training for teachers during the summer, when schools could have been preparing to reopen with online learning.

“School district leaders spent so much time over the summer trying to create reopening plans that would meet safety guidelines for classes inside school buildings that they had little time to focus on improving online academic offerings,” Hannah Natanson and Valerie Strauss warned in The Washington Post in August.

Improving remote learning, many experts agree, would have meant creating spaces for teachers to collaborate and share models of effective online instruction and lesson planning. And more time and resources should have gone into providing teachers who were struggling with better coaching and support.

Validating the experts, a nationwide analysis of teachers’s working conditions in the spring of 2020 conducted by Brown University and the City University of New York found that, because of the challenges of pivoting to remote learning, teachers experienced a “sudden and large drop” in their sense of professional success. However, teachers were “substantially less likely” to experience this decline when they could “depend on their district and school-based leadership for strong communication, targeted training, meaningful collaboration, fair expectations, and recognition of their efforts were least likely to experience declines in their sense of success.”

But the report’s authors found teachers experience a wide range of working conditions,with many falling in the “low” and “medium” situations, and they call for changes in “the organizational conditions that make teachers’ work and students’ learning possible.”

“The disregard of teachers’ shared professional expertise and practical knowledge is no accident,” wrote Diana D’Amico Pawlewicz in commenting on the debacle of fall school reopenings.

D’Amico Pawlewicz, who is an education reform and policy historian at the University of North Dakota and author of the book Blaming Teachers, argued that policy leaders’ lack of attention to teachers “reflects the way that, instead of treating teachers like other American professionals, society has long blamed them for the failings of schools.”

This disregard for teachers is all the more galling given that 2018–2019 witnessed the #Red4Ed wave of teacher rebellions, where educators—mostly in politically red states—held sickouts, walkouts, and mass street demonstrations to protest a lack of funding, attacks on teacher professionalism, and continuing threats to close and privatize public schools.

The teachers’ actions were ultimately beneficial for themselves and their students, resulting in increased teacher pay, promises of smaller class sizes, and more nurses and counselors in schools. Their protests also proved democracy was still alive and kicking in a country descending into authoritarianism.

But during the pandemic, when support for teachers would seem to matter most, their wisdom has too often been overlooked.

“In the spring, we had to come up with creative ways to support our families,” Milwaukee educator Glenn Carson told me. Carson, along with other Milwaukee educators I spoke to, described an intense effort to deliver devices and hotspots to homes, learn new technologies, and conduct family outreaches. They also said they stitched together a safety net of food delivery, health care, and social and emotional services for families hit hardest by the virus.

Needing to find creative ways to fill in the gaps left by school districts’ lack of preparation seems to be a shared experience among teachers across the country.

“I built a website where students and families could get daily lessons and messages from me,” Henry Jasso, a third-grade teacher at Dona Ana Elementary School, near Las Cruces, New Mexico, tells me. “We met daily online to touch base with one another and played learning games together.”

Teachers and school principals found “innovative ways to serve their students,” the National Education Policy Center reported in the midst of the growing contagion and pointed to organizations, including the Learning Policy Institute, the Network for Public Education, and Local Progress, that documented how teachers responded to their communities’ needs.

This is not to say that everything went swimmingly.

Online learning has never been as effective as in-person classes, according to numerous research studies. The fact teachers had to so quickly go virtual made that mode of instruction even more challenging, especially for low-income, Black, and Latinx students.

Additionally, special education advocates reported that at least seven million students with disabilities and learning impairments were being left behind due to school closures.

And a joint analysis by New Common Sense and Boston Consulting Group found fifteen to sixteen million students had no reliable internet connection.

Yet, despite the downsides to the spring experiment with online schooling, parent surveys conducted in the summer found that most “gave their children’s schools high marks.”

Similar to nurses and other frontline workers, teachers were lauded as “heroes” performing an essential role despite difficult circumstances. One would think, then, that the process for opening schools in the fall, regardless of the delivery format, would have put teachers and their needs at the center of the effort.

But in all fairness to school superintendents, policy leaders higher up the chain of command have also completely failed schools, teachers, and families.

In August, Dana Goldstein, an education journalist for The New York Times, highlighted how state and local governments were allowing bars and restaurants to reopen while leaving local school leaders to “figure out the details of running schools during a public health crisis largely on their own.”

Other education reports and experts pointed out the same. “The chaos can be laid squarely at the feet of government leaders who have provided little direction or financial support for schools,” wrote journalist Liz Willen and Sarah Garland, The Hechinger Report’s executive editor.

Even Arne Duncan, the Secretary of Education during most of the Obama Administration, fretted about this in New York Magazine: “The fact that we’ve had such horrific leadership . . . . It’s like we saw this tsunami coming and we just stood there and let ourselves be drowned.”

When Congress passed a coronavirus relief package with $13.2 billion for schools, it was widely acknowledged that the one-time payment was insufficient to meet most schools’ needs. It was not enough to, for example, pay for free broadband access and laptops for students, hire more teachers and school staff, and overcome school budget cuts enacted by or expected from state and local governments.

Yet President Donald Trump and the Republican-led Senate spent months doing nothing. In fact, Trump threatened to cut the funding of schools that didn’t open with full-time, in-person instruction, something he legally can’t do.

Education secretary Betsy DeVos, after trying unsuccessfully to direct more of the federal government’s financial aid to private schools, abdicated her leadership responsibilities completely by declaring that she doubted her department has “a role” in collecting data on school-related infection rates.

Trump’s careless tweet to “OPEN THE SCHOOLS!!!” also overlooked the concerns of most parents and teachers.

When New York City opened with in-person learning, the only district in the nation’s ten largest to do so, only 26 percent of the system’s 1.1 million students attended in-person classes. When the American Federation of Teachers surveyed teachers in June, 76 percent said they’d be comfortable going back to school if key safety precautions were put in place. In September, when teachers saw the lack of leadership to reopen schools safely, that figure plunged to 14 percent.

Certainly, the lack of funding and guidance from government leaders has put school leaders in a bind. But most of that discomfort trickles down to teachers who are hit the hardest. And now, in schools that have decided to reopen in-person (either full-time or partially), 88 percent of teachers have to purchase their own personal protection equipment, and 11 percent buy it for their students.

Of course, public education is not the only American institution where the pandemic has exposed leadership failures.

But an essential lesson of the pandemic is its tendency to strip down complicated social relationships to their essentials. People have had to start making decisions based on what is physically safe, how they can have access to staples like food and transportation, and whether or not they can still have a job.

What the pandemic revealed about public education is that schools have become the essential safety nets for families, that access to education services is grossly inequitable, and that the education process at its very core is about the relationships between teachers and their students.

If education policy leaders want to improve the way they run schools during a pandemic, maybe they should start with that.