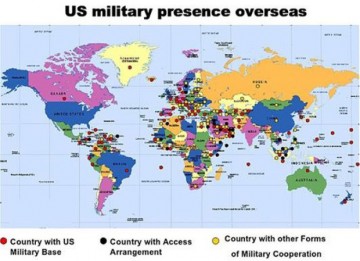 The thesis of anthropologist David Vine’s latest book, Base Nation: How U.S. Military Bases Abroad Harm America and the World, is taboo in American political discourse. It is a radical notion to suggest that foreign bases don’t protect American interests but actively harm them. Candidates who fail to reflexively support U.S. militarism face a political land mine. Even putative leftist Bernie Sanders has refused to challenge the status quo, in which the United States has 800 foreign military bases while the rest of the world combined has 30.

Vine makes his argument by comprehensively detailing the profligate, unsustainable spending on overseas bases, which is undertaken with little to no meaningful oversight by Congressional representatives. This spending is the main driver in perennial budget deficits. It also carries a tremendous opportunity cost. Direly needed investments in infrastructure, education and social programs are neglected at the expense of runaway military costs outside the country.

Beyond demonstrating that military buildup overseas is inefficient and wasteful, Vine reveals a deeper societal critique that manifests itself in the country’s military policy. “Force,” Vine notes, “has become one of America’s fundamental policy maxims.”

Rather than a noble instrument of beneficence, the U.S. military is a blunt projection of American power, radically opposed to the ideals of democracy and human rights it purports to represent. This gap between perception and reality has been cultivated for decades to serve the aims of the ruling class.

The notion that the U.S. needs to cover the globe in military bases emerged among elite planners in the buildup to World War II. Behind this policy, which is now taken for granted, is a pathological paranoia that demands absolute American hegemony.

“Even before the United States entered World War II, Roosevelt and other leaders had started developing a vision of the world as intrinsically threatening, in which any instability and danger, no matter how small or far removed from the United States, was seen as a vital threat,” Vine writes.

Immediately thereafter, the vast military buildup that President Dwight D. Eisenhower would famously label the “military-industrial complex” began. The complex that Eisenhower warned about has grown exponentially in the 50 years since, morphing into what investigative journalistNick Turse calls the “military-industrial-technological-entertainment-academic-scientific-media-intelligence-homeland security-surveillance-national security-corporate complex.”

Yet while both factions of the business party are dedicated to austerity – with the Republican faction rabid in their zeal to curtail public spending – any discussion of cutting military spending is a non-starter in Washington.

Politicians of all stripes eagerly back anything the military asks for in order to avoid accusations of being unpatriotic and weak on security. The use of dishonest McCarthy-like rhetoric to cower the military’s overseers has proved a powerful weapon in preventing critical discourse from entering the public arena.

The lack of criticism has more serious repercussions than merely wasting taxpayer dollars and allowing an outdated strategy to go unchallenged. It allows actions that would be condemned in the most severe terms if they were committed by an official enemy to be ignored and hidden in the name of “supporting the troops.”

Throughout decades of a permanent U.S. military presence abroad, the military and its personnel have committed many atrocities. Overwhelmingly, the crimes go unnoticed and the perpetrators go unpunished. Rather than a collection of isolated incidents, they comprise a pattern of human rights abuses and, in some cases, war crimes.

Creating outposts for the U.S. military in every corner of the globe makes displacement inevitable. The problem is exacerbated by the belief that foreign lands do not actually belong to the people who inhabit them, but to the United States, which is free to exploit them as it pleases. The story of the ethnic cleansing of the Chagossians is most demonstrative of this ethos.

In the late 1960s, U.S. Navy officials planned to remove all 2,000 inhabitants of the British-controlled island of Diego Garcia, part of the Chagos Archipelago in the Indian Ocean. After construction on Diego began in 1971, the Navy’s top admiral said the Chagossians “absolutely must go.” The entire Chagossian population was forcibly evicted from their island and moved 1,200 miles away without any financial assistance.

Vine’s account of the ethnic cleansing of the Chagossians is horrifying:

“With the help of U.S. Navy Seabees, British agents began the deportation process by rounding up the islanders’ pet dogs. They gassed and burned them in sealed cargo sheds as Chagossians watched in horror. Then the authorities ordered the remaining Chagossians onto overcrowded cargo ships. During the deportations, which took place in stages until May 1973, most of the Chagossians slept in the ship’s hold atop guano – bird shit. Horses stayed on deck. By the end of the five-day journey, vomit, urine, and excrement were everywhere. At least one woman miscarried. Some compare conditions to those on slave ships.”

This was far from an isolated case. “Around the world, often on islands and in other isolated locations, the U.S. military long displaced indigenous groups to create bases. In most cases the displaced populations have ended up deeply impoverished, like the Chagossians and Bikinians,” Vine writes.

From Panama to Guam to Puerto Rico to Okinawa to dozens of other locations across the world, the military has taken valuable land from local populations, often pushing out indigenous people in the process, without their consent and without reparations. They are enabled by the political subjugation of native peoples.

“From the military’s perspective, ongoing colonial relationships have allowed officials to ‘do what we want’ without many of the restrictions faced in the fifty states or in fully independent nations,” Vine writes.

Sexual Exploitation< One of the strongest condemnations of terrorist groups like ISIS - rightly so - is that they exploit women for sex. Examination of the U.S. military's history abroad reveals a track record of similar sexual abuse of local women and girls. Vine describes cases of Army soldiers who reported coworkers buying women as sex slaves. But he also describes larger structural forces that facilitate sexual exploitation. “Commercial sex zones have developed around U.S. bases worldwide," Vine writes. "Many look much the same, filled with liquor stores, fast-food outlets, tattoo parlors, bars and clubs, and prostitution in one form or another. The evidence is just outside the gates in places such as Baumholder and Kaiserslautern in Germany, and Kadena and Kin Town in Okinawa. Even during the U.S. wars in Afghanistan and Iraq, there have been multiple reports of brothels and sex trafficking involving U.S. troops and contractors.”In South Korea, Vine traces the evolution of "camptowns" from the emergence of American military bases in the 1950s. More than 150,000 local Korean women, lacking viable economic alternatives, were forced into sex work catering to American troops. They later faced severe social stigmatization and many ended up destitute. One could argue that the U.S. military did not create these conditions but, rather, the supply emerged to meet a market demand. But bases with American troops are not a product of a free market. They are imposed without consent on communities where they dominate the local economies.

Unequal power relationships between the occupying military and the indigenous populations create the conditions for social and economic exploitation. The existence of sexual exploitation to serve U.S. military personnel abroad is directly attributable to policy decisions that create bases at the expense of alternative possibilities of independent development.

The lack of respect for the lives and bodies of indigenous people is another product of unequal power relationships between U.S. military and the people whose land they occupy. American troops abroad are often afforded impunity to injure and kill those understood to be inferior to them.

“Status of forces agreements (SOFAs) that often allow U.S. troops to escape prosecution by host nations for the crimes they commit,” Vine writes. “Little known in the United States, SOFAs govern the presence of U.S. troops in most countries abroad, covering everything from taxation to driving permits to what happens if a GI breaks the host country’s laws.”There is a long history on the Japanese island of Okinawa of the local population suffering violent crime at the hands of the American military. Military personnel in Okinawa have kidnapped, raped, murdered and killed women and girls. Vine says that during the Vietnam War, soldiers on leave or stationed at Okinawa killed at least 17 women, many of whom worked at bars or saunas.

“Between 1959 and 1964, at least four Okinawans were shot and killed as the result of what military officials said were hunting accidents or stray bullets from training,” Vine writes. “Between 1962 and 1968, there were at least four more crashes and accidents involving military aircraft, leaving at least eight dead and twelve injured. At least fourteen people died after being hit by U.S. military vehicles, including a four-year-old killed by a crane.”

These crimes carried out directly by U.S. personnel are suffered by powerless populations who have no recourse to obtain justice. Even their narratives are covered up and ignored.

Vine’s study presents a much needed corrective to the nationalist narrative the American state, its public and its media would like to believe. If it is not enough to at least bring military policy into mainstream discourse, where it belongs, there will be little hope for the political system the military has come to dominate – or for the millions of people outside U.S. borders who continue to suffer its effects.