Above Photo: Sitting in at Pennridge. Photo by Anna Tinneny

Lookit These Kids Redux: Over 200 students at Pennsylvania’s Pennridge High who defied their school’s ban on joining last week’s nationwide walkout have transformed their ostensible punishment into Civil Disobedience 101 by turning their detention into a silent, moving sit-in. Days before the planned walkout, school officials had announced a Remembrance Assembly featuring a 17-minute silence and slide show to honor the Parkland victims; citing “safety concerns,” the school board also said any students who joined the walkout would “face consequences.” Somewhat defensively, the Superintendent clarified that students would be disciplined, not because “they expressed any particular viewpoint or opinion,” but for “willfully breaking a school rule about leaving the building without permission.”

The kids, ever savvy, raised a collective eyebrow at the fine-line argument: “Our school teaches us to be like Rosa Parks and Martin Luther King Jr., people who stood up for what they believed in,” one said, yet “they weren’t going to let us do the same.” Ultimately, about 800 students attended the sanctioned event, and 225 more – quickly dubbed the #Pennridge225 – walked out the front doors for 17 minutes of silence and a few speeches. Sean Jenkins, a senior, handed out voter registration forms and urged classmates to vote for candidates who support stricter gun law. In the end, they felt they’d done the right thing. “Honoring the victims without trying to effect change is not good enough,” said senior Jayson Badal. “It doesn’t do them justice.” When they walked back into school, they were instructed to get into lines and sign up for Saturday detentions.

This weekend, the first 46 turned up as ordered, sort of. Leaving their assigned seats, they sat in a circle on the cafeteria floor, linking arms and wearing the names of Parkland victims. Before sitting, one by one, they placed a flower at the middle of the circle in what one admirer called “the new flower power.” The organizer of the sit-in said she had in fact drawn inspiration from earlier students actions. “They always did it peacefully and silently,” she said. “There’s a power in being so silent that you’re incredibly loud.” The action was also loud enough to draw broad support from the community. On social media, parents praised the “breakfast club (of) badasses,” their “thoughtful resistance” and a “stellar Constitution-teaching moment.” “The adults are running a jockocracy,” said one, “while students meet the world and start remaking it.”

Before their detention, kids were greeted by parents and supporters waving signs and bearing donuts; afterwards, they gave out pizza. The California-based youth politics outreach group EighteenX18 also sent pizzas, and set up the hashtag #Pizza4Protesters to ensure the next two weekends of detention goers will likewise get fed. Meanwhile, word of the action spread: After one of the Pennridge kids argued the detentions were “a badge of honor” declaring that “we’ll stand up for what is right, regardless of consequences,” kids serving detentions for illicit walkouts in  Chicago and Kentucky echoed him. Meanwhile, the Pennridge kids learned a vital lesson of resistance. Insisting, “We want gun reform and we want it now,” one organizer thanked the school board for giving them “a huge platform” and assured them, “(We) are prepared to use it.”

The new Flower Power. #Pennridge225 protests #NationalWalkout detention by leaving assigned seats to hold sit in in the middle of the room. pic.twitter.com/P60vYjob7S 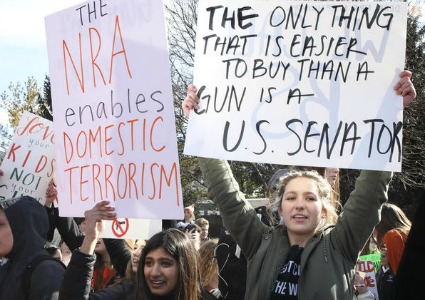 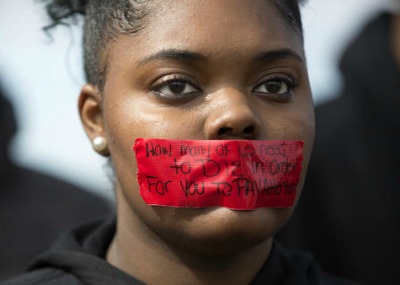