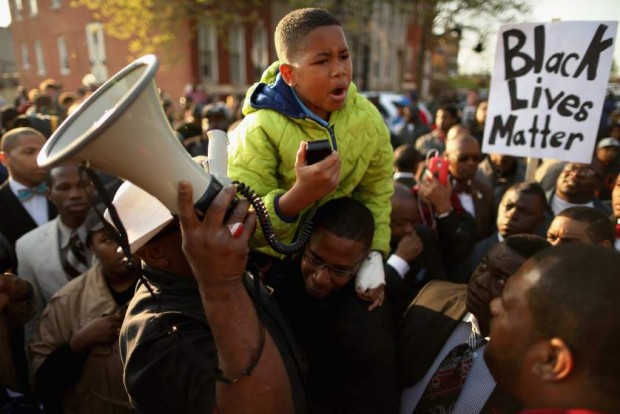 Baltimore And The Human Right To Resistance

BALTIMORE, MD – APRIL 22:  Ten-year-old Robert Dunn uses a megaphone to address hundreds of demonstrators during a protest against police brutality and the death of Freddie Gray outside the Baltimore Police Western District station April 22, 2015 in Baltimore, Maryland. Gray, 25, was arrested for possessing a switch blade knife April 12 outside the Gilmor Homes housing project on Baltimore’s west side. According to his attorney, Gray died a week later in the hospital from a severe spinal cord injury he received while in police custody.  (Photo by Chip Somodevilla/Getty Images)

Anti-Black racism, always just beneath the surface of polite racial discourse in the U.S., has exploded in reaction to the resistance of black youth to another brutal murder by the agents of this racist, settler-colonialist state. With the resistance, the focus shifted from the brutal murder of Freddie Gray and the systematic state violence that historically has been deployed to control and contain the black population in the colonized urban zones of North America, to the forms of resistance by African Americans to the trauma of ongoing state violence.

The narrative being advanced by corporate media spokespeople gives the impression that the resistance has no rational basis. The impression being established is that this is just another manifestation of the irrationality of non-European people – in particular, Black people – and how they are prone to violence. This is the classic colonial projection employed by all white supremacist settler states, from the U.S., to South Africa and Israel.

The accompanying narrative is that any kind of resistance that does not fit the narrow definition of “non-violent” resistance is illegitimate violence and, therefore, counter-productive because – “violence doesn’t accomplish anything.” Not only does this position falsely equates resistance to oppression as being morally equivalent to the violence of the oppressor, it also attempts to erase the role of violence as being fundamental to the U.S. colonial project.

The history of colonial conquest saw the U.S. settler state shoot and murdered its’ way across the land mass of what became the U.S. in the process of stealing indigenous land to expand the racist White republic from “sea to shining sea.” And the marginalization of the role of violence certainly does not reflect the values of the Obama administration that dutifully implements the bi-partisan dictates of the U.S. strategy of full spectrum dominance that privileges military power and oppressive violence to protect and advance U.S. global supremacy. The destruction of Libya; the reinvasion of Iraq; the civil war in Syria; Obama’s continued war in Afghanistan; the pathological assault by Israel on Palestinians in Gaza and the U.S. supported attack on Yemen by the Saudi dictatorship, are just a few of the horrific consequences of this criminal doctrine.

Race and oppressive violence has always been at the center of the racist colonial project that is the U.S. It is only when the oppressed resist — when we decide, like Malcolm X said, that we must fight for our human rights — that we are counseled to be like Dr. King, including by war mongers like Barack Obama. However, resistance to oppression is a right that the oppressed claim for themselves. It does not matter if it is sanctioned by the oppressor state, because that state has no legitimacy.

No rational person exalts violence and the loss of life. But violence is structured into the everyday institutional practices of all oppressive societies. It is the deliberate de-humanization of the person in order to turn them into a ‘thing’ — a process Dr. King called “thing-afication.” It is a necessary process for the oppressor in order to more effectively control and exploit. Resistance, informed by the conscious understanding of the equal humanity of all people, reverses this process of de-humanization. Struggle and resistance are the highest expressions of the collective demand for people-centered human rights – human rights defined and in the service of the people and not governments and middle-class lawyers.

That resistance may look chaotic at this point – spontaneous resistance almost always looks like that. But since the internal logic of neoliberal capital is incapable of resolving the contradiction that it created, expect more repression and more resistance that will eventually take a higher form of organization and permanence. In the meantime, we are watching to see who aligns with us or the racist state.

The contradictions of the colonial/capitalist system in its current expression of neoliberalism have obstructed the creation of decent, humane societies in which all people are valued and have democratic and human rights. What we are witnessing in the U.S. is a confirmation that neoliberal capitalism hascreated what Chris Hedges called “sacrificial zones” in which large numbers of black and Latino people have been confined and written off as disposable by the system. It is in those zones that we find the escalation of repressive violence by the militarized police forces. And it is in those zones where the people are deciding to fight back and take control of their communities and lives.

These are defining times for all those who give verbal support to anti-racist struggles and transformative politics. For many of our young white comrades, people of color and even some black ones who were too young to have lived through the last period of intensified struggle in the 1960s and ‘70s and have not understood the centrality of African American resistance to the historical social struggles in the U.S., it may be a little disconcerting to see the emergence of resistance that is not dependent on and validated by white folks or anyone else.”

The repression will continue, and so will the resistance. The fact that the resistance emerged in a so-called black city provides some complications, but those are rich and welcoming because they provide an opportunity to highlight one of the defining elements that will serve as a line of demarcation in the African American community – the issue of class.  We are going to see a vicious ideological assault by the black middleclass, probably led by their champion – Barack Obama – over the next few days. Yet the events over the last year are making it more difficult for these middle-class forces to distort and confuse the issue of their class collaboration with the white supremacist capitalist/colonialist patriarchy. The battle lines are being drawn; the only question that people must ask themselves is which side they’ll be on.

Ajamu Baraka is a human rights activist, organizer, geo-political analyst and editor and contributing columnist for the Black Agenda Report. Baraka serves as the Public Intervenor for Human Rights as a member of the Green Shadow Cabinet and coordinates the International Affairs Committee of the Black Left Unity Network. He is also an Associate Fellow at the Institute for Policy Studies (IPS) in Washington, D.C.