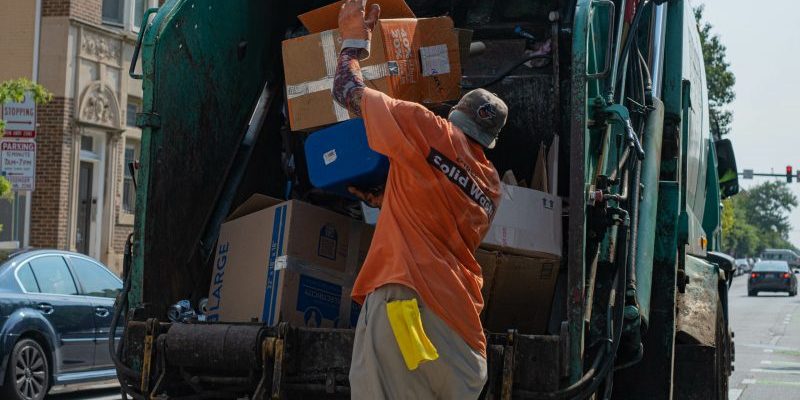 Above Photo: A worker from Baltimore’s Department of Public Works throws waste into the back of a recycling truck on Aug. 10, 2021. Agya K. Aning / Inside Climate News.

But The Problem Lies With Plastic Itself: Most Of It Never Gets Recycled.

Baltimore, Maryland — Leaders here aspire to create a city with zero waste. But new research shows that Baltimore has only attained an estimated residential plastic recycling rate of 2.1 percent, far below the national average of about nine percent.

The report, by the Global Alliance for Incinerator Alternatives, a coalition of 800 groups and individuals who advocate for zero waste, found that Baltimore’s plastic recycling rate was the lowest of the five cities surveyed, which included Minneapolis, Minnesota; Long Beach, California; Newark, New Jersey; and Detroit, Michigan.

“Well, I’m not surprised because plastics recycling has been an abysmal failure despite the millions of dollars spent by the plastics industry trying to get the public to believe that you can actually recycle plastics,” said Judith Enck, a former regional administrator of the Environmental Protection Agency and the president of Beyond Plastics, an organization that seeks to end plastics pollution.

“Zero waste” is an aspiration avowed by numerous cities around the country, although specific definitions of what zero waste means vary. Brandon Scott, Baltimore’s mayor, supported a plan for zero waste when he was the city council president last year, calling for the city to divert 90 percent of its trash from its landfill, incinerator and environment by 2040.

Community leaders and activists were anticipating the closing of the city’s solid waste incinerator, Wheelabrator Baltimore, at the end of this year. But Scott’s predecessor helped extend its contract for another 10 years on his way out of office. Now, Scott’s administration is trying to steer plastic and other trash away from it and the city’s Quarantine Road Landfill.

The Global Alliance report also found that nearly half of Baltimore’s residential plastic was disposed of in its landfill, while the remaining 47 percent was burned at Wheelabrator. (Ash from the incinerator also ends up in the landfill).

The report used 2017 data for Baltimore, but researcher Alex Danovitch said he believes “the estimates are a fair representation of where the city is at today.”

The primary culprit behind the low recycling rate, the report found, was single-use plastic items like Ziploc bags, packaging, plastic grocery bags and cling wrap, known as plastic film. While plastic is generally thought of as being reusable, the study’s authors deem plastic film non-recyclable, because there is rarely anyone willing to buy and reuse or repurpose it.

Recycling rates for plastic film typically range in the single digits. Enck said people hoping to recycle it are better off avoiding using it altogether. She also noted that its low recycling rate is why some states have banned plastic grocery bags.

Even when there are buyers, sorting film and other plastics from the whole of discarded materials is a difficult and costly task, one that’s potentially dangerous for workers. Baltimore’s waste stream was clogged with more of these thin materials than that of the other four cities, with film making up an estimated 37 percent of all discarded plastic.

“People think you can put [plastic bags] in your recycling bin,” Enck said. “Those bags very commonly, though, jam the gears of the equipment, you know, bringing the whole operation to a halt.”

Only about one-third of Baltimore’s residential plastic waste, whether mixed with trash or placed separately into household recycling bins, has potential buyers. But the proliferation of single-use plastic is not unique here or to the other cities included in the study; such plastics pose problems around the country and the world.

The problem is likely to grow far worse: According to a 2016 report from the World Economic Forum, the amount of plastic produced globally was predicted to double within 20 years and nearly quadruple by 2050.

Most Plastics Won’t Ever Be Recycled

Plastic was first invented during the mid-19th Century in an attempt to find a substitute for the ivory needed to make balls for the wildly popular game of billiards. Its use continued throughout the 20th Century and particularly during World War II, when the U.S. government needed to conserve natural resources for the war effort, such as the sand required as a raw material for glass or the silk used to make ropes. The upward trend in plastic use rode the wave of post-war prosperity, but, beginning in the 1960s, with an increase in visible pollution and the burgeoning environmental movement, public opinion turned on these materials.

Today, just about anything made of plastic—which is typically produced from natural gas and other fossil fuels—has a number displayed on it with “chasing arrows” circling it. Only those pieces labeled with the numbers 1 or 2 can be recycled, and sometimes 5 depending on the location. But those with 3, 4, 6 or 7 have zero or negative market value and are likely to end up polluting waterways or sitting in dumps.

Enck said non-recyclable products labeled with chasing arrows are “the very definition of greenwashing”—corporate practices that falsely portray products, policies or services as environmentally friendly. Confusion over what is and isn’t recyclable often leads to these items being mixed together in residential collections, requiring sophisticated sorting at recycling centers. But if mixed plastics can’t be sorted, the entire batch is contaminated, meaning it’s non-recyclable.

However, a spokesperson for the Plastics Industry Association said, “The plastics industry has invested and continues to invest billions of dollars into new recycling technologies and programs at home and abroad to expand the universe of products and materials that can be recycled.”

At best, much of the plastic that is reused is “downcycled,” a process that results in a lower quality, structurally weaker product than the original one created by virgin materials. Examples of downcycling include turning plastic bottles into carpeting and then later using that to make plastic lumber for things like park benches. When towns and cities fail to recycle, plastics can end up in landfills, where they might take a decade or even centuries to fully break down, all the while risking contaminating groundwater. But before something like a six-pack ring can break down, it will become brittle, breaking into what are known as microplastics. These tiny pieces, less than five millimeters in length, can wreak havoc on the environment by choking wildlife. They’ve also been shown to increase cancer risk in humans.

Plastics are particularly disastrous for waterways—they clog rivers around the globe, particularly in the developing world, where they leach harmful chemicals.

“The wave action acts like a paper cutter,” Enck said. “One plastic bag can become hundreds or thousands of pieces of microplastics.”

Nearly half of Baltimore’s residential plastic is sent to Wheelabrator, where it’s exposed to temperatures exceeding 2,000 degrees Fahrenheit. Smoke containing dioxins, one of the most dangerous known chemical groups, heavy metals and various greenhouse gases can be seen escaping the incinerator’s stack from miles away.

Incinerators, or “waste-to-energy facilities”—the term preferred by the industry—took off in the 1980s and were touted as an evolution in waste management. They reduced waste volume by up to 95 percent, leaving more space in landfills, and they produced energy, using steam boilers to generate electricity, about 0.4 percent of the nation’s total.

Today, there are more than 70 incinerators operating in 21 states—concentrated mostly on the east coast, where room for landfills is scarce. Industry representatives describe them as vital components of America’s waste disposal infrastructure and argue that, were they to be shut down, landfills would overflow.

But incinerators have been closing anyway—at least 31 since 2000, according to a report from The New School’s Tishman Environment and Design Center. The cause has been attributed to an overall lack of stability in the market: declining energy costs, which drains revenue; inconsistent waste volume and tipping fees (the amount charged per ton to dump trash); changing regulations; and an increased focus on environmental justice. Incinerators have also been shuttered because of the expensive upgrades required to continue operating beyond their typical 30-year lifespan.

“They’re so expensive to initiate and to upgrade that they keep having to take more and more waste to meet the economic demands,” said Wilma Subra, a chemist and environmental scientist who assists communities with environmental battles.

Wheelabrator, which began operating in 1985, is the city’s single largest standing source of air pollution. In a settlement with the city of Baltimore, Wheelabrator agreed to install nearly $40 million in emissions upgrades. In exchange, Baltimore will continue sending waste there through 2031 and pay an estimated $106 million under the new contract.

“Once you have an incinerator, you need to feed it,” Subra said about the forces that keep them running. Those include contracts that require municipalities to supply incinerators with guaranteed amounts of garbage, which can discourage the pursuit of alternative solutions for waste disposal.

“Incinerator operators are often very happy to be burning plastic, because they get revenue from it and it burns well,” Enck said.

Another incentive to keep incinerators running are the residences, office buildings and facilities that rely on them for power.

In terms of air pollution, Urban said the largest source in Baltimore is vehicular traffic, and shutting down Wheelabrator would add “upward of 36,000 tractor trailer trips to local roads each year to methane-producing landfills.”

According to a report from the Institute for Local Self-Reliance, a Washington, D.C.-based research and advocacy organization, three to five times more energy can be saved through waste prevention, reuse, recycling and composting than by burning trash.

Urban said the company has gone to great lengths to support recycling and diverting plastics from the waste stream. But shutting the facility down, she said, would by “various analyses” cost Baltimore taxpayers $100 million over several years.

In Baltimore, It’s Back To Recycling

Community members, especially the majority-Black population living in southern Baltimore near Wheelabrator, have long complained about Wheelabrator’s effects on their health and have mounted protests to have it shut down.

The report from the Tishman Environment and Design Center found that about 40 percent of incinerators are located in census tracts where both the percentage of people of color and the percentage of those living below the federal poverty line is above 25 percent.

But the incinerator also has defenders. “I believe that if [incineration is] done properly, and I believe Wheelabrator does it properly, environmentally, that it’s not the harm to the environment that advocates think it is,” said Chris Skaggs, former executive director of the Northeast Maryland Waste Disposal Authority.

And with Baltimore locked into burning plastics and other waste through 2031, Mayor Scott’s administration is looking over recommendations from the city’s Department of Public Works to increase recycling.

The city has adopted a plan to supply around 200,000 recycling carts to Baltimoreans, beginning at the end of September. Other proposals under consideration include expanding services to multi-family buildings that currently don’t have access to recycling and requiring privately owned properties to provide recycling services.

There were also waste management options the Department of Public Works rejected, such as mandatory recycling and dual or multi-stream recycling, which would require providing separate collection containers for different types of materials.

Aside from Department of Public Works recommendations, Baltimore is scheduled to start a plastic bag ban on Oct. 1. The measure was originally adopted in January 2020 and set to go into effect one year later, but it has been delayed twice now by the coronavirus pandemic.

Whatever the severity of pollution caused by residential plastics nationwide, environmentalists say the plastics industry has spent millions of ad dollars to place the burden of recycling on the public.

Enck said: “A more accurate PR campaign would be: Don’t litter plastic. And if you don’t litter it, you should just know that it’s going to be buried or burned at an incinerator or a landfill.”