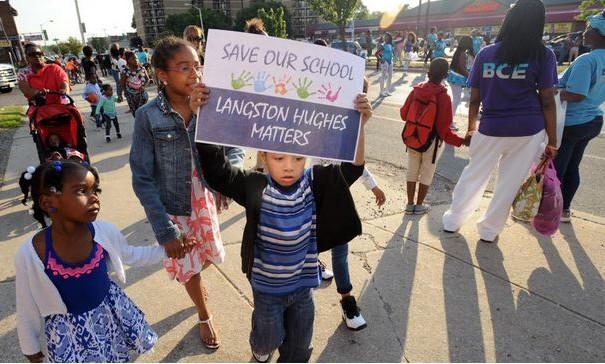 Above: Darell McGee, 4, center, a pre-K student at Langston Hughes Elementary School marched with his cousins, Adrienne Harris, 4, (left) and Kayla Lide, 11, who are also students there, and community leaders to save their school from closing by the city. By Kenneth K. Lam, Baltimore Sun.

A Northwest Baltimore community fighting to save its school — considered an anchor of the neighborhood — has been granted the rare opportunity to plead its case before a state administrative judge.

Langston Hughes Elementary is among five city schools due to close at the end of the school year. The closures, which came as a result of a December school board vote, are part of a large-scale plan to upgrade the district’s infrastructure by shuttering dilapidated or underused buildings.

But the decision outraged Langston Hughes parents as well as community leaders and lawmakers, who say the plan unfairly targets small schools with no regard for how big a role they play in communities.

They contend that Langston Hughes students will suffer as they disperse to other schools throughout the Park Heights area, walking a mile through crime-ridden, drug-infested blocks to schools that are no more high-performing than the one they’re leaving.

“They just go down a list, and just pick out schools based on enrollment,” said City Councilwoman Sharon Green Middleton, who represents the district. “You put these communities in trauma. It’s just a terrible way to make decisions.”

The Langston Hughes Community Action Association and its president, George Mitchell, have led the charge against the school closure. The association filed an appeal with the Maryland State Department of Education, and was granted a hearing before an administrative judge beginning July 20.

The move came after the group filed a request for injunctive relief in Circuit Court that was dismissed in April.

At a recent school board meeting, Mitchell made an impassioned plea for the board to reconsider the closure, bringing the board chair to tears.

“Our kids have exceeded every single expectation you have put in front of them,” Mitchell said. “We are doing exactly what you want a school to do. We’ve never asked y’all for anything. Just leave us alone.”

But the school board has not reversed its decision and the school system declined to comment, citing the pending litigation.

In documents outlining the recommendation to close Langston Hughes, the district said the school’s small size “limits possibilities for robust academic programming.” Currently, the school has 176 students, using 58 percent of the building.

But parents have said they are wary about the impact that switching schools will have on students. They said Langston Hughes’ size makes for intimate classes, personable staff and more opportunities for students because there is less competition for programs.

Naimah Butler has watched her daughter become an extrovert in her pre-kindergarten class.

“I feel like if she goes to another school, she’ll go back into her shell,” Butler said.

Del. Jill Carter and Sen. Lisa Gladden, both of whom are attorneys, will represent the community association before the administrative judge in July.

Gladden successfully fought a school closure more than a decade ago, when she represented Edgewood Elementary, and believes she can do it again.

She said she was moved by Mitchell’s commitment to the school. He runs an after-school program, teaching students Korean and Spanish.

“If you believe that small educational environments are the best way to make sure small people learn big things, this is what you do,” said Gladden of signing on to the Langston Hughes appeal. “We got a good thing going, and we should keep it.”

Carter said she is taking the case because “the overwhelming consensus is that it would be to the detriment to the community, exposing the children to harm and danger.”

The school community raised concerns that the district would not provide transportation to even the 4- and 5-year-olds who had to walk blocks to get to Pimlico Elementary/Middle — blocks that Middleton said, “I would in no way, myself, walk.”

Mitchell has organized walks from Langston Hughes to Pimlico — down blocks known for their violent crimes — and invited school board members. None has come along, he said. A walk on Friday brought out many supporters, including the president of the Baltimore Teachers Union. Another walk is scheduled for Wednesday.

The school system is required to provide transportation if students must travel more than one mile to school. The distance from Langston Hughes to Pimlico is one mile.

“It is my belief that we will prevail,” Carter said. “But if not, then the legislature has to take another look at tightening the reins of school closings in this 21st Century plan.”

Community and political leaders also have said they believe school officials have been disingenuous about the reason the school is closing, pointing to several ways they have wavered in their explanation — from citing enrollment to academics and back again.

“They keep on moving the goal post,” Mitchell said. “The numbers speak for themselves. Be fair about it, and don’t be arbitrary.”

The community has pointed out that the school originally was slated to close in 2017, but that date was abruptly moved to this year.

At the same time, several charter schools had expressed interest in moving to the Park Heights neighborhood, at least one in the Langston Hughes building. Middleton said she had been contacted by four charters in the past year.

Mitchell said the community believes they are being pushed out to allow the charter schools to move in.

The community pointed out that although the district’s plan was to close outdated and dilapidated structures, Langston Hughes’ building is in good condition.

“If you’ve got a school building with air conditioning,” Gladden said, “you should try your best to keep it open.”

Mitchell and others say enrollment declined only after parents were told three years ago that the school would face imminent closure. When that date was changed to 2017, enrollment began climbing again, data show. Now, the school’s pre-K and kindergarten classes are full.

The school’s poor academic performance also was cited by school officials, but advocates point out that the test scores at the schools that would absorb Langston Hughes students — specifically Pimlico Elementary/Middle School — weren’t much better.

Education experts say research shows one of the most detrimental effects of school closures is that students rarely are placed in better-performing schools.

“Closing down a place like Langston Hughes, a place that’s fully functional, it’s definitely a step backward,” said Jessica Shiller, an education professor at Towson University who has followed the city’s closures. “If you’re going to take kids in a low-performing school and put them in another one, it’s only going to exacerbate the issue.”

At the school board meeting last week, city schools CEO Gregory Thornton began to address Mitchell’s concerns by saying the decision “wasn’t about student achievement.” He was cut off by school system officials because of the pending litigation.

But outcry from the community and elected officials has led Thornton to change his mind about closing small schools.

Earlier this year, Thornton asked the school board to keep Abbottston Elementary, a school with a smaller population and comparable academic performance to Langston Hughes, open for one more year — reversing his recommendation that it close this year.

In a March letter, Thornton wrote that “based on feedback from the school community and other stakeholders, we concluded that the wisest course was to keep the school open for another year to allow for additional study of the impact of its closure on students, families and the community.”

Middleton said the school system’s seemingly deaf ear to the Langston Hughes community reflects a sentiment that emerged from the unrest in the city in recent weeks.

Students and families face a dearth of resources in Park Heights as it undergoes a slow revitalization. Langston Hughes serves as the hub for meetings, community cleanups, coat drives, after-school programs and block parties.

“That’s the anchor of that community. That’s the safe haven. That’s where the nurturing takes place,” Middleton said.

“The school system always says that the community is in charge,” she said. “And to have all of these advocates and elected officials supporting this school and they not listen, it’s like, here’s another problem that you’re creating by not listening to the community.”