Above photo: Activists called on the city yesterday to renegotiate a 2016 agreement they say underfunds city services. (Jennie Lu)

A long-festering issue erupts in a City Council informational hearing.

Here are the facts about what Baltimore’s anchor institutions do – and don’t – pay.

Last night the City Council ripped off one of the biggest scabs on Baltimore’s body politic – the fact that large nonprofit institutions pay no property taxes.

At an informational hearing, the Council heard from advocacy groups who denounced a 2016 agreement with anchor hospitals and universities in which they agreed to pay a total of $6 million a year for their use of city services.

Critics have called the Payments in Lieu of Taxes, or PILOT, a “backroom deal” passed by the Board of Estimates to allow the nonprofits to grossly underpay their fair share of taxes through June 2026.

“One of the most effective steps Baltimore can take to rectify the tremendous shortfalls in funding education in this city is to reopen and renegotiate Baltimore’s current tax agreement with the major nonprofits,” Diamonté Brown, president of the Baltimore Teachers Union, said in a prepared statement.

“These institutions absolutely can and must contribute more to ensure a brighter future for our children and our city,” she argued.

A report titled “Burdening Baltimore” by the National Nurses United has denounced the agreement as another example of the “corrupting influence of large not-for-profit organizations like the University of Maryland Medical System” on city government as revealed in the “Healthy Holly” scandal.

Last night, the nonprofits pushed back, invoking the sanctity of their agreement with a past administration.

“It’s disheartening to be at a point where there’s even a discussion that a deal might not be a deal,” Alicia Wilson, a Johns Hopkins vice president, told the Council.

FACT FILE 1: IF BALTIMORE COULD TAX ALL TAX-EXEMPT PROPERTY WITHIN ITS BOUNDARIES, IT COULD REDUCE ITS CURRENT TAX RATE FROM $2.248 TO $1.55 PER $100 OF ASSESSED VALUE.

She and others said nonprofits make substantial contributions to the city’s well-being by buying local goods, providing local employment and sponsoring educational and health-outreach efforts in poor neighborhoods.

What follows is background and key statistical data about the issue.

The exemption of nonprofits from paying local property taxes has festered, as an issue in the city, for years.

It has periodically broken to the surface as Baltimore’s economy has shifted from a reliance on manufacturing companies – General Motors, Armco Steel, Continental Can, Western Electric, Bethlehem Steel’s ship-repair yards – to a host of expanding hospitals and universities.

Whereas manufacturing now comprises less than 4% of Baltimore’s economy, about 35% of nongovernmental jobs are concentrated in health-care and education-related institutions.

This translates into eight of the 10 largest private employers being nonprofits (the exceptions are BGE/Exelon and Amazon) and 30% of total assessed property value exempt from taxation (this includes government property).

That amount of exempted value compares to 9.8% in surrounding Baltimore County and 11% in Prince George’s County. 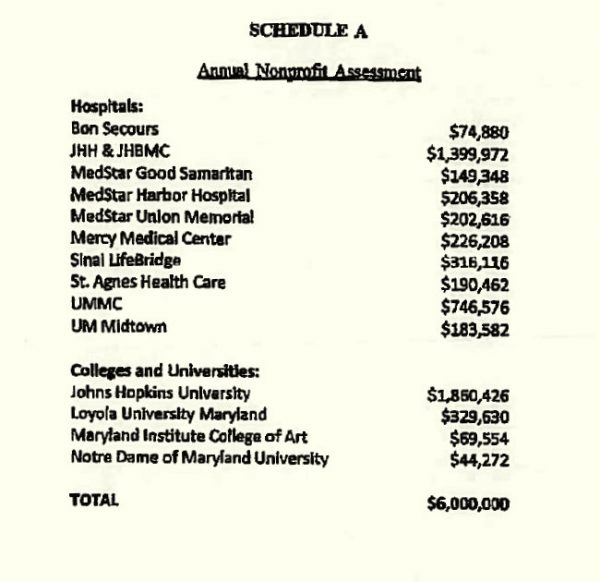 Annual payments by 15 large nonprofits who entered the PILOT agreement with the city in 2016. In return (see below), the city agreed “not [to] request or seek new taxes or assessments on the members,” such as energy taxes, parking taxes and telecommunication taxes. (BOE Memo, May 31, 2016) 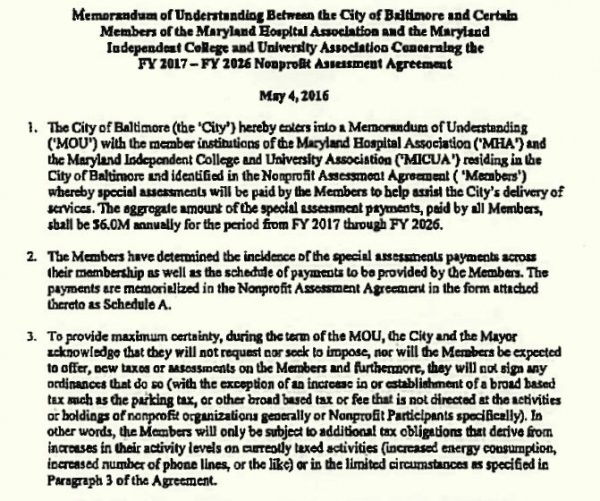 Altogether, 19% of all tax-exempt property in Maryland is located in Baltimore City, according to the State Department of Assessments and Taxation.

If Baltimore could tax all tax-exempt property, it could reduce its current tax rate of $2.248 to $1.55 per $100 of assessed value while maintaining existing services, the city finance department says.

By far, the largest tax-exempt property owner is Johns Hopkins, which controls the Johns Hopkins Hospital and Medical Center, the Bayview medical campus, the Homewood university campus and various other entities.

FACT FILE 2: WERE HOPKINS TO PAY PROPERTY TAXES, THE CITY WOULD GET $59 MILLION A YEAR IN REVENUES COMPARED TO A VOLUNTARY PAYMENT OF $3.25 MILLION.

Hopkins pays no property taxes, but voluntarily contributes $3.25 million to the city under the 2016 PILOT.

Were Hopkins to pay property taxes, some $59 million would go to the city,  Cenname estimates. That represents an 18-fold increase in funds from the present arrangement ($59 million compared to $3.25 million).

BTU President Brown noted that the city is under tremendous pressure to identify new sources of funding for its share of public education proposed by the Kirwan Commission.

“One of the most effective steps we can take to rectify the tremendous shortfalls in funding education is to reopen and renegotiate the current tax agreement with large nonprofit,” Brown said. “These institutions absolutely can and must contribute more.”

The city finance department has backed up Brown’s assertion. In prepared testimony last night, it offered this analysis:

“With a need for major investment to meet the recommendations of the Kirwan Commission, the question becomes who will foot the bill? The preliminary Kirwan workgroup calculations would require Baltimore to contribute an additional $138 million in fiscal 2022 and the equivalent of $266 million in fiscal 2020 by the end of the 10-year phase-in.

What four local universities and seven hospitals would pay in property taxes, what they would pay based on their use of city services, and what they pay at present under the PILOT. (Department of Finance)

Use of City Services

The finance department estimates that 11 nonprofits use about $47.6 million worth of municipal services a year after deducting for community benefits and contributions that they make to the city.

By this calculation, the four universities and seven hospitals (see chart above) are underpaying the city by $41 million a year – $47 million worth of services minus the $6 million of PILOT payments.

FACT FILE 3: UMMS GETS $7.4 MILLION IN MUNICIPAL SERVICES, BUT PAYS LESS THAN $1 MILLION BACK TO THE CITY.

Not surprisingly, the city’s biggest nonprofit, Johns Hopkins, gets the most “free” city services under this estimate – $26.1 million in services versus $3.25 million in PILOT payments.

Hopkins is not alone:

• UMMS, which operates the University of Maryland Hospital, Midtown medical campus and a biopark research center, gets $7.4 million in yearly city services. It pays back one-eighth of that – $930,158– under the PILOT.

• Medstar hospitals, including Harbor Hospital and Union Memorial, pay the city relatively more – $558,322 in annual PILOT contributions in return for $1.85 million in services.

• Maryland Institute of Arts (MICA), according to the finance department, picks up $1.15 million in city services – only to return $69,554.

In the last session of the Maryland legislature, Hopkins won approval to establish its own police department for its East Baltimore, Homewood and Peabody Institute campuses.

That provision is expected to minimally reduce the cost of municipal government because Baltimore Police and the state’s attorney’s office will still be needed to handle major incidents at or near the campuses. 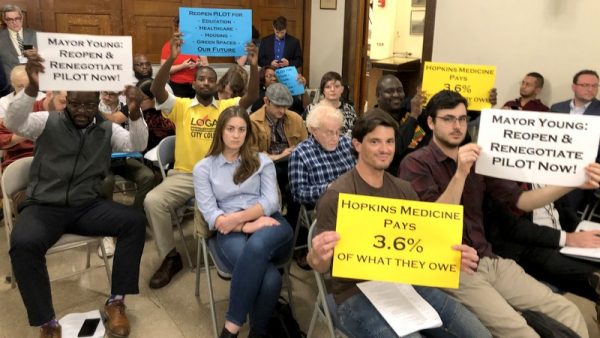 Demonstrators at an October City Council meeting call for renegotiation of the PILOT agreement with Baltimore non-profits. (Fern Shen)