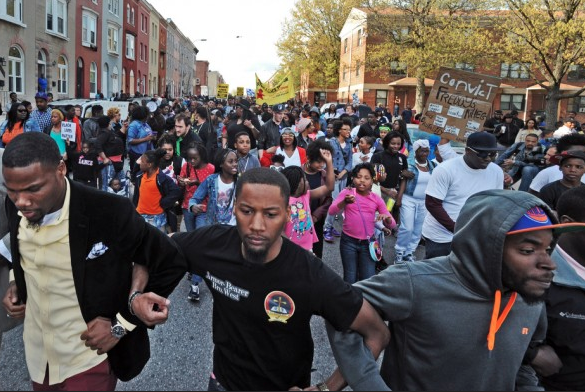 Baltimore: One Year After The Uprising

Above: Hundreds march in the Baltimore Uprising in April 2015. Source: Baltimore Sun.

Note: Last April after the killing of Freddie Gray Baltimore experienced an uprising. It was not what was shown on television, which highlighted a few hours of burning cars and buildings, but a week long event that brought the city together. People of all ages and races called for transformation of the city so it corrected the injustices of decades of neglect and racism in the poor black communities of East and West Baltimore. As you can hear from our first two guests the problems of police violence continue to plague Baltimore but residents or also organizing to make the call for change a reality.

A year later there is a lot of community organizing going on, as you can hear from Derrick Chase and Abdul Salaam below, which will take time to show results. The city is also going through a major local election where a new mayor and city council with six open seats will be elected. The current mayor wisely decided not to seek re-election and seven members of the council are also retiring. More than two dozen people have sought to become mayor including Democrats, Republicans, Greens and independents. April 26th will be the primary of the Democrats and Republicans; and May 1 will end the Green Party primary (which has three people running for mayor) and independents must submit sufficient signatures by early August. The top two Democrats in the polls are Catherine Pugh, a state senator who is in the leadership of the Democratic machine in Annapolis and supported by big business interests and former Mayor Sheila Dixon who was forced out of office after being indicted but who has a great deal of support in poorer communities for a lot of the work she did as mayor.

Baltimore has been run as a one-party city for decades, if this continues next year will be the 50th year in a row of a Democratic mayor. We interview Joshua Harris, a leading candidate for the Green Party nomination, who is putting forward a cutting edge urban agenda for the 21st Century. He is calling for ways to ensure funds in Baltimore is more equitably shared as well as ways to empower people and communities with increased direct democracy. This includes a Baltimore City Bank, participatory budgeting, worker cooperatives, land trusts, urban gardens in food deserts, community involvement with police control and more. A major issue on the agenda is TIFs, tax increment financing which are a form of corporate welfare as well as Community Benefits Agreements, which go along with them. The lame duck mayor and city council are considering a massive $535 million TIF for Under Armour to essentially build a new downtown. This is being rushed with as little discussion and citizen participation despite widespread community opposition. This will be a major issue in the campaign.

On the one year anniversary after the uprising in Baltimore over the murder of Freddie Gray, Clearing The FOG broadcasts a two-hour special live from Baltimore. We speak with people who are directly impacted by police violence and those who are working to stop the injustices.

Kelly Holsey is a paraeducator for the Baltimore County Public School system. She is the fiancee of Keith Davis, Jr. who remains in jail after being chased and shot by Baltimore City Police in June, 2015.

Abdul Salaam is a Baltimore resident and father who works in as a mental health provider. He was was brutally beaten during a July 1, 2013, traffic stop in Northeast Baltimore. The same officers beat and killed another Baltimorean, Tyrone West, during a traffic stop a few weeks later. Salaam was recently awarded $70,000 in a case related to the beating. The officers continue to work for the police force and have been promoted.

Derrick Chase was born and raised in Baltimore. He is currently the president of the Coalition for the Transformation and Betterment of Baltimore, known as Stand Up Bmore.

Joshua Harris is a leader and visionary who advocates on behalf of the community. He is currently seeking the nomination for the Green Party to run for mayor. He is in a three-way race and the nomination process ends on May 1.
Harris is dedicated to creating attainable and cutting edge solutions for the challenges Baltimore faces. In this interview he calls for a Baltimore public bank, participatory budgeting so communities decide their needs, land trusts that give communities control over their development, urban gardening in food deserts to improve health and nutrition as well as other ways to shift who gets the capital produced by Baltimore. He also has opposed TIFs, a form of corporate welfare, at a time when the current ‘lame duck’ government is pushing through a $535 million tiff for Under Arbor to create a city within the city that could put Baltimore deeply in debt and in danger of bankruptcy if the plan fails.

Joshua has passion for, and is commitment to, empowering his community. As co­-founder of the Hollins Creative Placemaking, Joshua leads initiatives that foster urban revitalization by including the use of art and creative processes to foster an environment of belonging. His community involvement extends to community leadership, as Joshua sits on the Charles Village Urban Renewal community board, Paul’s Place Community advisory board, Baltimore’s Promise Mentoring Task Force, and is the youngest board member for Baltimore’s Southwest Partnership.

Joshua, a product of a public school system, understands the need to reinvest and improve our Baltimore City School system. As such, he has been an invited speaker before the Congressional Black Caucus to discuss education disparities in minority communities. In addition to academics, as an athlete he also believes our youth need activities outside of school that teach them life lessons and motivate them to become leaders. Joshua encourages leadership skills, continuing education, and offers mentoring through his sports mentoring program, Project ‘A’ Game. In collaboration with YouthWorks, Joshua developed a community-led program to employ Baltimore City youth.

Active in the fight for social justice, Joshua is committed to public safety reform. He has also served as a legislative aide for Delegate Charles E. Sydnor and assisted with the passing of police body camera legislation. Joshua believes that it is necessary to rebuild the trust between our neighborhoods and the police department. Outside of Baltimore, Joshua has worked with Black and Brown People Vote, aimed at increasing voter education and turnout in African­ American and Latino communities.

Baltimore Man Shot in Face by Police and Charged by RT

Video: The Beating of Abdul Salaam by Baltimore Bloc