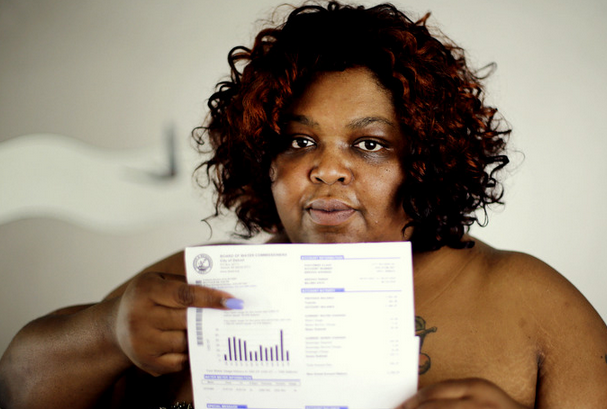 Nicole Hill holds up her past due water bill at her home in Detroit Wednesday, June 25, 2014. Baltimore has started issuing shut-off notices to residential water customers with overdue bills despite a United Nations experts claim that water shutoffs due to overdue bills violate international human rights. (AP/Paul Sancya)

Detroit activists garnered international attention last year for the plight of their city’s most impoverished residents, who faced water shut-offs for unpaid bills despite the city’s high unemployment rate and collapsed economy. United Nations experts were among many who expressed concern that water shut-offs violate basic human rights.

Following Detroit’s lead, Baltimore has started issuing shut-off notices to residential water customers with overdue bills. According to the Baltimore Sun, residents were notified of impending shut off if their accounts were more than six months overdue and they owed more than $250. The efforts have proven profitable: City officials report collecting $1 million from 1,500 overdue accounts.

That total reflects only a small portion of the $40 million owed to the city, however. Commercial accounts owe roughly $15 million, and of that total, 40 businesses owe $9.5 million.

Writing for the Baltimore Brew, Mark Reutter and Danielle Sweeney point out that the biggest delinquent account is RG Steel, which is owned by a wealthy billionaire investor. Despite unpaid bills amounting to about $7 million, the city won’t see any of that money because the assets of RG Steel’s Sparrows Point steel mill were liquidated in a bankruptcy.

Jones said the city, which has a history of water billing errors, should target businesses with past-due accounts before households. …

‘The city must act to ensure universal access to safe and affordable water service,’ Jones said.”

In a letter to the Sun co-signed by eight medical professionals from the Johns Hopkins Leadership Education in Adolescent Health Program, the authors warn that, “This plan will place the most burden on those with least able to bear it — children, the elderly and those living on limited, fixed incomes.”

The shut-offs come as Baltimore residents face rising bills, with an average family of four expected to pay an additional $141 in water and sewage charges this year.

Meanwhile, although Detroit activists won temporary reprieves from shut-offs and forced the city to work out improved payment plans, the problem remains unsolved — with as many as 800 residential customers a week expected to receive water shut-off notices in April.