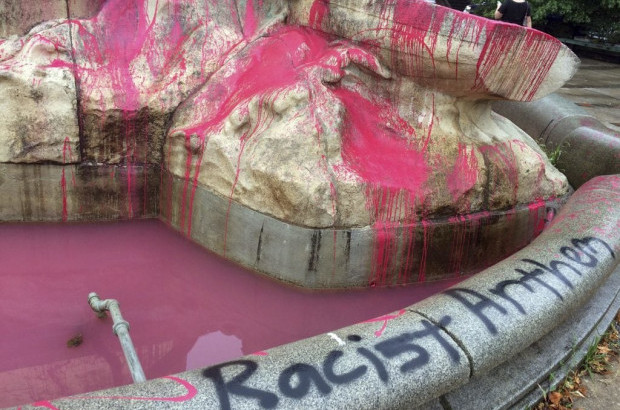 Above Photo: Paint covers part of a memorial to Francis Scott Key after it was defaced overnight in downtown Baltimore. (Colin Campbell/The Baltimore Sun via Associated Press)

Mayor Catherine Pugh says she has no plans to remove the Francis Scott Key monument in Bolton Hill that was vandalized before dawn Wednesday and has directed art preservation experts to determine the cost of cleaning it.

Exactly 203 years after the Maryland attorney wrote the poem that would later become the national anthem, the city awoke to find the words “Racist Anthem” spray-painted on the Eutaw Place monument and red paint splashed on it.

The third stanza of Key’s poem includes a reference accusing the British of encouraging American slaves to join the fight against their masters.

City officials said they know of no way to prevent future vandalism, short of catching the person or people responsible. Police don’t have any suspects or surveillance footage of the incident.

“Ultimately, it’s going to come down to them being caught and charged,” police spokesman T.J. Smith said.

Officers make periodic checks on city property during their patrols, but the department does not plan to place the Key monument under constant police protection, Smith said.

“We can’t ensure it’s not going to happen again,” Pugh spokesman Anthony McCarthy said. He said, however, the mayor does not plan to take it down and wants to see it restored.

Of the vandalism, McCarthy said, “We understand the freedom of expression, but there certainly has to be a more constructive and productive way to have a conversation about history.”

The city spent $125,000 to restore the Key monument in 1999, after the monument went neglected for years, with cracked concrete and a broken fountain, according to an article in The Baltimore Sun at the time.

A New York-based art conservator hauled away tons of trash and rubble; cleaned and applied a protective wax coating over the bronze figures and plaques; cleaned, repaired and removed stains from white marble; cleaned and repaired the granite wall surrounding the fountain at its base; and applied gold leaf to two plaques, The Sun reported.

The gold leaf will likely need to be removed and replaced, said Eric Holcomb, executive director of the city’s Commission for Historical and Architectural Preservation. The city will submit an insurance claim once the cost is determined, he said.

Holcomb said he understood the vandals’ intent, but he called the incident “disheartening.”

“It’s so counterproductive, what they’re doing,” he said. “History’s messy. It’s nuanced. It’s something to talk about, not something to erase.”

Key wrote “The Star-Spangled Banner” during the Battle of Baltimore as he anxiously watched the overnight bombardment of Fort McHenry by the British fleet in 1814.

City and state officials have long viewed the anthem’s Baltimore roots as a source of pride — naming schools and the Beltway bridge spanning the Patapsco River after Key. They held a “Star-Spangled Spectacular” bicentennial celebration of the battle and the anthem in 2014.

NFL quarterback Colin Kaepernick stoked a national controversy last season over his decision not to stand for the anthem before football games in protest of the oppression of black people and other people of color in America.

Kaepernick’s protest sparked criticism of him, but also drew scrutiny of the anthem — mostly pointed at the seldom-sung third stanza, which includes a reference to the killing of British slaves and mercenary soldiers in the battle.

The vandals who painted the monument also spray-painted those words on sidewalk next to it: “No refuge could save/ Hireling or slave/ From terror of flight/ Or gloom of grave.”

The vandalism comes weeks after a monument to Christopher Columbus was damaged in Northeast Baltimore. That incident occurred a week after the city removed three monuments honoring Confederate figures and one honoring former U.S. Chief Justice Roger B. Taney.

Pugh ordered those statues removed during the night, following a deadly white supremacist rally against the planned removal of a Confederate statue in Charlottesville.

Protesters at the University of Virginia this week covered a statue of President Thomas Jefferson, a slaveholder and founder of the university, with a black shroud, criticizing officials’ response to the violence. Charlottesville officials had previously shrouded the statues of Confederate generals Stonewall Jackson and Robert E. Lee.

Key had a complex record on race. A slave owner, he also donated his legal services to slaves fighting for their freedom under a 1783 law that prohibited slaveholders in other states from bringing them to Maryland, according to “What So Proudly We Hailed,” a 2014 biography by Marc Leepson.

Key is widely believed to have helped spark Washington’s first race riot in 1835 by his overly aggressive prosecution of a young black man accused of trying to attack his white female owner. But he also stood in front of a jail door and faced down a white lynch mob that wanted to hang the suspect, Arthur Bowen.

Holcomb drew a contrast between the Key monument — built to honor Key’s contribution to American history — and the statues built to glorify the Confederacy and its pro-slavery cause.

“The bottom line is monuments are there to ask the viewer to remember something very specific,” he said. “If that monument is there for the person who wrote and memorialized the Battle of Baltimore, then that’s what that monument is saying. It’s not saying white supremacy is righteous and godly.”

Key was aboard a British ship off Fort McHenry, trying to arrange the release of an American prisoner, during the Battle of Baltimore when he wrote what became “The Star-Spangled Banner,” which would go on to become the national anthem.

The monument at Eutaw Place was donated to the city by Charles L. Marburg, a wealthy tobacco merchant who founded the Municipal Art Society of Baltimore. It was built for $25,000 by French sculptor Marius-Jean-Antonin Mercie and was dedicated in 1911.

A statue of Columbia, the personification of the New World, stands at the top holding an American flag, and a barefoot sailor rows a boat at its base, in which Key is depicted presenting the finished poem. The two gold-leaf panels show the bombardment of Fort McHenry and the guns and ramparts of the fort.

Half of the 1999 restoration was paid for by Target Stores, the nonprofit Heritage Preservation in Washington, and the Smithsonian Institution’s National Museum of American Art. State and local funding partners matched those gifts.