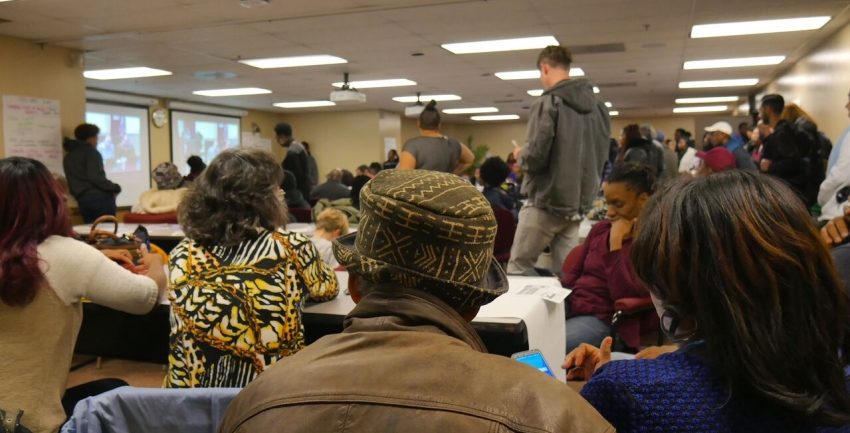 Above photo: Baltimore residents sit in one of two overflow rooms at a Board of Education meeting last Tuesday where teachers and students protested the conditions of the city’s schools. (Photo: Ryan Harvey/Rebel Lens Bmore).

When a photograph of bundled-up students in a frigid Baltimore classroom recently spread on social media—with temperatures in schools as low as the mid-30s—the city became a focal point of public attention. But two organizations of Baltimore teachers say such situations, far from isolated, are the latest examples of why educators are pushing to radically democratize the city’s school system

“It wasn’t until we started sharing pictures in our classrooms showing 30 and 40-degree temperatures and speaking out together in a unified way that it got anyone’s attention,” says Kimberly Mooney, a teacher and member of the Baltimore Caucus of Educators for Democracy and Equity (CEDE), a caucus of the Baltimore Teachers Union (BTU), which is itself part of the American Federation of Teachers.

Last year, Mooney and CEDE ran a nearly successful insurgent campaign against the BTU’s entrenched President Marietta English, calling for the union to be more transparent and proactive around key issues, including reducing class sizes, rolling back standardized testing and advancing social justice issues relevant in the city. That mobilization developed into a fresh organization of teachers that is helping lead the fight for a new approach to Baltimore’s school system.

Alongside CEDE is another grassroots teacher-run effort and BTU caucus, the Baltimore Movement of Rank-and-File Educators (BMORE). Inspired by the 2012 Chicago Teachers Union strike, BMORE describes part of its mission as “working to transform the BTU from a service union to a social justice union.”

Both groups launched petitions this week in light of the freezing classrooms. “Baltimore City children attending decrepit school facilities without functioning heat and drinkable water is a tragedy that the state of Maryland created over decades of underfunding,” reads BMORE’s statement and list of demands. “They have repeatedly neglected their own definition of adequacy by 3 billion dollars over the past two decades alone, much of which would’ve prevented these circumstances before they happened.”

CEDE and BMORE presented their petitions to Baltimore’s Board of Education in a Tuesday board meeting where crowds of teachers, students and participants of numerous racial and social justice organizations gathered in such large numbers that two overflow rooms were needed to host them.

Behind the issue of Baltimore’s freezing classrooms is the poor condition of the city’s education system in general. The fight to radically change those conditions, led by groups like BMORE and CEDE, is happening on many levels. Above all, it is a fight against power-holders in the richest state—in the world’s richest country. Secondly, it’s a fight against a city school board that has inadequately dealt with its budget realities and too-often ignored or pushed aside needed changes. And finally, it’s a struggle to make the BTU a more community-focused, grassroots-driven union.

“We came across these national stories where people wanted to see unions become more democratic, less top-down, and advocate on behalf of the entire community, says teacher and BMORE member Corey Gaber. “And we said, ‘Why can’t we transform the BTU to be more like these unions we are seeing elsewhere that are pro-active unions?’”

“We started as a study group reading about what the Chicago Teachers Union did back in 2010 and 2012,” says teacher Natalia Bacchus, one of BMORE’s founders and a teacher at Moravia Park Elementary. She explains that Chicago teachers built grassroots power in order to take control of their union and push it in a new direction that mobilized its members, while inspiring teachers from around the country with a working model.

BMORE took the initiative on their own to start that process while, unknown to them at the time, CEDE was doing the same thing. Often in collaboration, the two groups have since been pursuing strategies and campaigns to radically change their union and, through those efforts, change the way the education system functions in Baltimore.

While Mooney says CEDE has definitely been inspired and informed by the Chicago Teachers Union as well, the inspiration for the group really grew out of the conditions of Baltimore’s schools. “I think it was more of a frustration with the way things were in our district and the lack of urgency about those issues from our union,” Mooney explains.

Both groups have taken similar approaches to their missions: putting power in the hands of teachers who see the school system as a part of a much larger community—one that was under siege by the State of Maryland long before this winter. And they see the grassroots mobilization of their fellow union members as neccesary conditions to affecting greater changes at the city and state level.

“We exist in a backdrop where cuts have been happening for decades,” says teacher and BMORE member Cristina Duncan Evans. “Baltimore City has never had adequate funding. It’s like the frog in the boiling water, and the frog doesn’t notice.”

“We’re in a situation,” Evans continues, “where a problem that has grown over decades has now reached a point where, for some reason, we don’t have communication plans to parents or a set policy about what is the minimum accepted temperature in a school building.”

BMORE sees the role of racial discrimination against a predominantly black student body as an inextricable part of the problem, says Evans, explaining that the group launched with a focus on building capacity with teachers of color. “We believe in elevating teachers’ voices and putting more power in the hands of people in Baltimore City who are closest to educational issues,” Evans says, ”and we do that in a way that recognizes that this is a racial justice issue.”

While BMORE and CEDE are both pushing immediate demands this week, they are more focused on the long-term work of building grassroots power. BMORE has launched an inter-union campaign to change what they say is an unfair voting process in which teachers must cast ballots in person, on a school day, in a small window of time. They have gathered more than 800 signatures calling for a mail-in process to increase turnout. They are also pushing for changes to the state’s mandatory testing process, including a revision of the interpretation of the Every Student Succeeds Act and the test-burden it carries.

While pushing for these changes, BMORE is also hosting its own study groups, building coalition with other social justice groups in the city and working with a national network of similar groups to share knowledge and ideas.

Mooney says that grassroots organizing within the school system is essential. “People fail to act because they are afraid of the repercussions,” she emphasizes. “I think that what we have seen is that if we act together, they can’t single out individuals as easily. It’s important to find those people willing to stand with you in solidarity.

“We didn’t ask anybody permission to do what we’re doing right now,” Gaber says of BMORE’s organizing campaigns. “We got together, talked about it, and made a list of demands. And now our demands are becoming a lead narrative. That started with teachers talking.“

Following Tuesday night’s meeting, the Board of Education will hold a town hall meeting to focus specifically on issues realted to facilities and maintenance.

The Baltimore Teachers Union did not respond to a request for an interview.

Ryan Harvey is a Baltimore-based journalist and musician and the co-founder of Firebrand Records. His work focuses on global politics, social movements and music.