Above Photo: Ban Ki-moon: ‘It simply breaks my heart to see victims of tragic mass shootings then be potentially bankrupted because they cannot afford the hospital and recovery bills.’ Photograph: Andrew Seng

The former UN secretary general Ban Ki-moon called on Americans to pass universal health coverage at a speech in New York City on Tuesday, marking a dramatic intervention of world leaders into the US healthcare debate.

Ban called on the US to stop “powerful interests” from prioritizing “profit over care” as part of a global delegation pushing the US to adopt a publicly financed health system similar to those in other wealthy countries.

The US spends more on healthcare than any nation in the world, yet 28 million Americans still lack care.

“In the US, all too often only rich people get access to expensive life-saving treatments,” said Ban. “This is unjust and threatens everybody’s health when working- and middle-class people with communicable diseases cannot afford treatment for their infections.”

“Even routine preventive care is often prohibitively expensive,” said Ban. “As America is demonstrating, you simply cannot reach universal health coverage if your health system is dominated by private financing and ultimately functions to prioritize profit over care.

Enacting universal health coverage would be a revolution in US healthcare. Currently, the US relies on a complex network of for-profit health insurers, government subsidies and limited public insurance programs to provide healthcare access to Americans.

Currently, about 28 million Americans have no health insurance. For people without insurance, an emergency room trip could easily be a financial disaster costing tens thousands of dollars.

In his speech, Ban highlighted that the gap in access to healthcare meant victims of the recent mass shootings at a Las Vegas concert and Texas church were left without affordable care.

“It simply breaks my heart to see victims of tragic mass shootings then be potentially bankrupted because they cannot afford the hospital and recovery bills,” said Ban. “This is one of the clearest indictments of America’s health system today.”

Ban spoke at an event at Bellevue Hospital called “Health for All: #WalkTogether” organized by The Elders, a group of global leaders working for human rights. The Elders was founded by Nelson Mandela and is chaired by Kofi Annan. 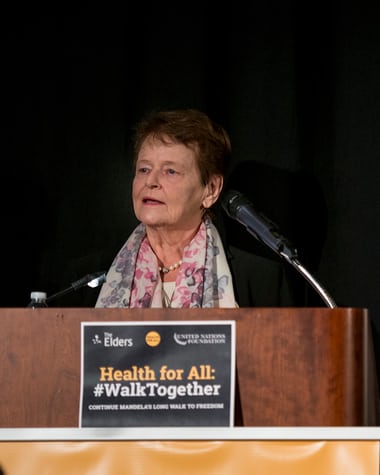 Gro Harlem Brundtland: ‘Denying health coverage for poor children for tax cuts for the rich is not what we would expect of a compassionate society.’ Photograph: Andrew Seng

“We think this is the very first time that the global community has engaged so directly with the US healthcare debate,” he said. “The World Health Organization is thinking as well about how we can help here in the US.”

“I and my fellow Elders are fully aware that healthcare debates in the US somehow are different,” said Gro Harlem Brundtland, former director general of the World Health Organization. “They are fought with more tension and divisiveness than other places.”

“President Trump seems intent on dismantling his predecessor’s reforms through excessive executive orders … denying health coverage for poor children for tax cuts for the rich is not what we would expect of a compassionate society, and hopefully the story will end there and it will not happen,” she said.