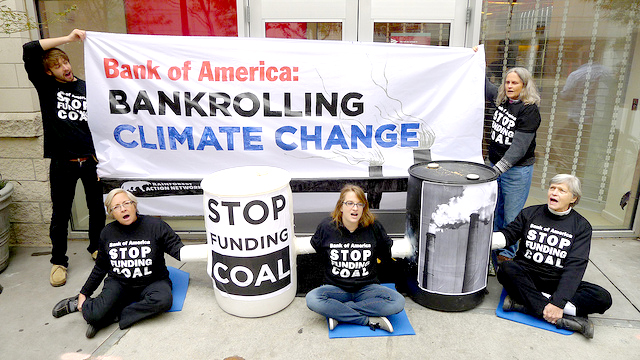 Above: Bank of America protest in Charlotte, North Carolina in November 2012.

Charlotte, NC—Bank of America unveiled a new global coal mining policy today committing to reduce exposure to coal mining companies across the board. Bank of America’s Andrew Plepler announced the new policy at the bank’s annual shareholder meeting this morning in Charlotte, stating:

The policy change comes after four years of campaigning from Rainforest Action Network and other groups, and is the strongest policy of its kind to date.

“Today’s announcement from Bank of America truly represents a sea change: it acknowledges the responsibility that the financial sector bears for supporting and profiting from the fossil fuel industry and the climate chaos it has caused,” said Rainforest Action Network Climate and Energy Program Director Amanda Starbuck. “In real terms, this means the bank is turning its back on the coal mining industry and committing to energy efficiency and renewable energy.”

In light of the new coal policy, Bank of America received a BBB grade on coal mining from Rainforest Action Network, BankTrack, and the Sierra Club in the 2015 Coal Finance Report Card—the highest grade given to a bank to date in the report card. The 2015 report card, which was released Monday, cited the impending Bank of America policy change as a bright spot that other banks should emulate. The new Bank of America commitment states, “Bank of America will continue to reduce our credit exposure to coal extraction companies. This commitment applies globally, to companies focused on coal extraction and to divisions of diversified a mining companies that are focused on coal.”

“This is a challenge to other financial institutions,” said Starbuck. “We don’t need banks to change the lightbulbs at their corporate headquarters, we need them to stop bankrolling fossil fuels that are killing the climate.”

However, Bank of America received lower grades in coal-fired power and human rights, and Starbuck cautioned that Bank of America will have to live up to its commitments on coal-mining. “RAN will rigorously monitor the implementation of this policy and hold Bank of America to its word. We also hope other banks will go further than Bank of America went today. There are just a few short years left to prevent catastrophic damage from runaway climate change. We need to cut off the financial support for the coal industry—and we need to keep all fossil fuels in the ground.”

RAN announced its campaign targeting Bank of America in 2011, in light of the fact that Bank of America was considered the most resistant to changing its position on coal of all the major American investment banks. RAN, along with hundreds of allied groups, previously introduced shareholder resolutions at Bank of America annual meetings; worked with directly-impacted communities in the Powder River Basin, Appalachia, India, and Colombia to document environmental and human rights abuses related to Bank of America-backed coal mining companies; disrupted Bank of America recruitment efforts on campuses; organized direct action protests at Bank of America branch locations; and hung a “Bank of Coal” banner off the side of Bank of America stadium in Charlotte, NC, among many other tactics.