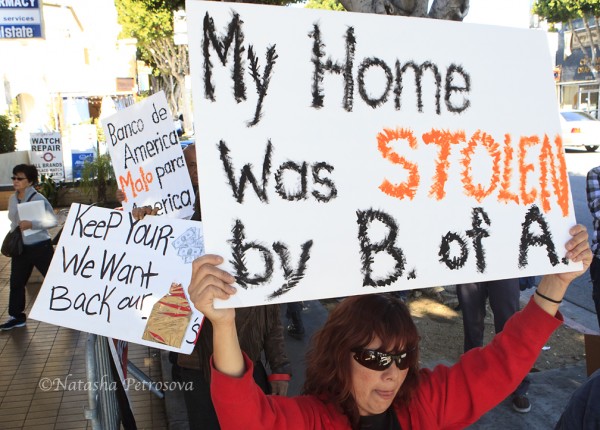 B Of A Foreclosure Ruled Unconstitutional, Sets Precedent

Above photo: Bank of America protest in Los Angeles, CA.

Judge George N. Bowden of the Superior Court in Washington State ruled against Bank of America (BoA) in a foreclosure battle that ended with the nonjudicial foreclosure sale under the Deed of Trust Act (DTA). The sale was deemed void, and the court is setting the foreclosure aside.

In this case defended by StafneTrumbull law firm in Washington State, the homeowner won his house from BoA which is another major victory against the unethical and illegal foreclosures industry that has left millions of Americans homeless.

Bowden acknowledged that this case was like most; “convoluted in the minefield” that is the Mortgage Electronic Registration System (MERS) system.

Bradburn, the homeowner, was told by BoA “that he should stop making his mortgage payments so that he could qualify for refinancing.”

BoA ensured that this homeowner was in default of the mortgage by promising to refinance; then initiated litigation against the homeowner to retrieve the property for failure by Bradburn to remain current on his payments.

Bowden pointed out that the DTA “seems to contemplate a borrower and a lender with an independent trustee having the power to foreclose on the deed of trust in the event of default by the borrower. The lender would normally hold the underlying note and be the beneficiary of it. Here matters have been complicated by the sale of the underlying note from HomeStar Lending to Countrywide, which was later acquired by [BoA].”

Interestingly, Bowden stated that “Fidelity Title was identified as the trustee but then MERS was characterized as the beneficiary ‘as the nominee’ of the lender and their assigns. At summary judgment it was claimed that the note was ‘owned’ by Fannie Mae although it was ‘held’ by [BoA], which was then described as the ‘servicer’ of the note at the behest of Fannie Mae.”
The evidence presented by the homeowner showed that “MERS was never the owner or holder of the note.”

In 2013, Bain v. MERS held that this system “is not and cannot be a legal beneficiary under Washington State law. Only the legal holder of the note, the real creditor, has the power to appoint the substitute trustee in order to transact such legal actions as a foreclosure.”

Neil Garfield, property right attorney commented that MERS “is the electronic smokescreen that allowed banks to build their securitization Ponzi scheme without worrying about details like ownership and chain of title.”

Garfield said: “Properties were sold to multiple investors or conveyed to empty trusts, subprime securities were endorsed as triple A, and banks earned up to 40 times what they could earn on a paying loan, using credit default swaps in which they bet the loan would go into default. As the dust settles from collapse of the scheme, homeowners are left with underwater mortgages with no legitimate owners to negotiate with. The solution now being considered is for municipalities to simply take ownership of the mortgages through eminent domain. This would allow them to clear title and start fresh, along with some other lucrative dividends.”

Bowden cited that there were “contradictory statements that were filed. [BoA] filed a declaration with ReconTrust which identified Fannie Mae as the owner and beneficiary of the deed of trust, yet ReconTrust later identified [BoA] as the beneficiary.”

This shows the scheme enacted by BoA to sanction this illegal and unconstitutional foreclosure which was proven because the DTA was not adhered to; as well as “failure to materially comply with that statute renders a foreclosure sale pursuant to it invalid.”

Therefore the foreclosure implemented against the homeowner was illegal because there was a failure to appoint “a trustee that was independent.”

Bowden clearly stated “I could not find that Fannie Mae as the claimed owner of the underlying note was a bona fide purchaser for value, even if it was not complicit in the violations of the DTA.”

It was concluded that BoA and MERS action were “unfair [and] deceptive” in nature and the homeowner was “injured” because of this foreclosure.