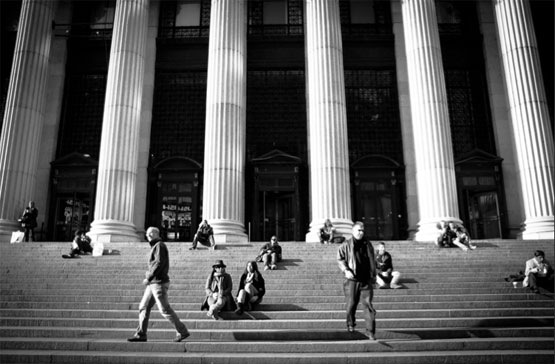 Banking At The Post Office Is Better Than Payday Loans

The U.S. post office on Martin Luther King, Jr. Blvd. is a bastion on its Harlem block. Entrenched beside a pawnshop, a cash-for-gold business, and a commercial bank many in the neighborhood are unable to use, the facility is essentially a fortress. Complete with heavy brick walls, steel screens, vaults, ATMs, and armored trucks, the premises evoke one word: Security. If you’ve followed recent news, they also suggest a second word: Bank.

“There’s a post office every five blocks in Manhattan—there’s accessibility in every zip code,” explained Frankie Wright, 32, a USPS Supervisor of Customer Services in East Harlem. “On an operational level, we’re already capable.”

The idea, popularized by journalist David Dayen and law professor Mehrsa Baradaran, would create a public option for credit and help insulate Main Street in the likely event of another financial crisis.

For example, a borrower without access to a commercial bank might typically accept a small loan at an unreasonably high interest rate from a payday lender. If a postal banking system were in place, that customer could instead walk into the local USPS branch and take out a simple loan as a government-provided public service. Due to the restricted nature of postal banking, customers’ access to funds would be comparatively safe from vultures and the whirlwinds of the broader, deeper financial system.

Although the idea seems new here and now, a successful U.S. Postal Saving System already existed from 1911-1967, and similar schemes operate overseas today, including in Germany, Japan, Switzerland, and the UK.

Though the proposal is not without its critics, there are surprisingly few legal and political hurdles to implementation. Senator Elizabeth Warren recently penned a U.S. News op-ed in earnest support, and just three weeks ago, she joined the Pew Charitable Trusts for a conference in Washington, D.C., where speakers debated common concerns: Postal banking advocates deplored the struggles of the financially insecure, while opponents expressed skepticism regarding the operational capacity of USPS to offer financial services, and questioned the effects of those new services on the federal budget.

It’s expensive to be poor

In the U.S, 38 percent of the population—88 million people—either have no bank accounts (the “unbanked”) or are at least partially dependent upon high-cost services like payday lending (the “underbanked”). These households pay dearly for basics.

In 2012, the income for the average underbanked household was about $25,500, but it spent an average of nearly $2,500 solely on interest and fees for alternative financial services (AFS) like payday lending. That’s almost 10 percent of their annual income—about as much as they spent on food.

Unbanked and underbanked people are a mix of working and middle-class families, students, the unemployed, and others living paycheck-to-paycheck. Yet financial exclusion is disproportionately rampant among people of color and immigrants, and especially women within those groups. According to the last comprehensive government study, published in September 2012, more than half of African-American households were either unbanked or underbanked, with similar numbers for Hispanic and unmarried, female-led households.

There are many reasons for this maldistribution—most of them structural and based in discrimination. Regardless, the disparate impact of financial insecurity is unacceptable. Former Harlem resident and public banking advocate Alexander Hamilton did not envision such an exclusive system. Providing broad access to money and credit is why the government charters, insures, and regulates financial institutions in the first place.

“People have faith in the post office,” said Wright. “USPS is a structured, silent organization. We operate discreetly. Every stamp, every dollar is accounted for. People know this.”

Wright, who started as a letter carrier at 20 and now works in management, has expertise in distribution, delivery, and labor relations—and he’s overwhelmingly supportive of postal banking and confident USPS can make the transition. “We’ve handled the invention of email and the shift from letters to parcels. We can handle this.”

USPS is the country’s most most well-liked federal agency and one of the most trusted institutions of any kind when it comes to privacy. As Wright mentioned, much of USPS management, as well as its lawyers and regulators, insist the country’s second-largest employer can and should provide basic financial services.

Indeed, the USPS Inspector General has written a white paper detailing steps for implementation. The American Postal Workers Union (AFL-CIO) is also supportive. At the Pew conference, representative Phil Tabbita argued USPS is well-suited to the task. USPS employees are already trained to handle simple financial transactions in the form of money orders and remittances. Conservatives like Rep. Darrell Issa (R-Calif.) might suggest that the workforce—a quarter of whom are military veterans—will suddenly become utterly incompetent if saddled with an expanded job description. But these cries often stem from a poorly disguised—and poorly informed—anti-labor ideology.

There is rampant misunderstanding regarding the laws and accounting that would govern postal banking. Opponents claim that new financial services would financially tank USPS and subsequently create an unsustainable fiscal burden for the federal government. 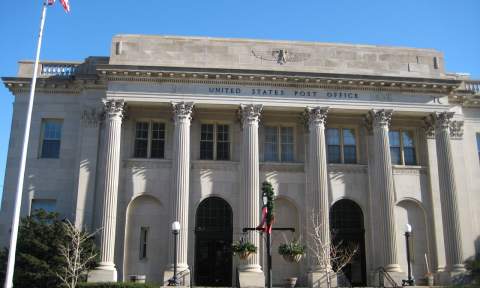 But these concerns don’t add up. First of all, the post office is not directly funded by tax revenues. The Postal Reorganization Act of 1970 has legally forced USPS to become self-sufficient, to generate its revenue from its own services, whatever draconian cuts Congress has since imposed. Furthermore, the analysis by the Inspector General suggests USPS itself is likely to turn a profit off of new financial services through modest fees and interest.

Even so, regardless of the post office’s own financial situation, the federal government’s balance sheet does not include USPS assets and liabilities. Indeed, the separation is so complete that there’s a uniquely foolish law mandating USPS set aside money today for all future retiree health benefits—without subsidy from the Treasury. This unique burden, which is not imposed upon any other government enterprise, is the chief cause of USPS’ financial woes.

Even if USPS finances were included in the broader federal budget—as they arguably should be—Deficit Hawk policies like the pre-funding requirement would make even less sense. As Deficit Owls, like former Deputy Treasury Secretary Frank Newman, assert, asking a federal agency directly funded by the U.S. government to save for a far distant future, is like forcing us to wear sweaters in July so we can store warmth for January. Uncle Sam can always create money out of thin air, subject only to inflationary constraints; setting aside dollars for 2058, instead of using them for growth now, is foolish.

Of all the services USPS could offer, small-dollar loans have come under the most scrutiny. Yet they deserve the least concern from the perspective of U.S. government fiscal sustainability. Opponents like Issa have whipped up public skepticism by conjuring an image of hard-working taxpayers “subsidizing” lending for the poor. In this scenario, postal goblins would hoard tax revenues in a vault and dish it out to poor people, who would presumably never pay it back, sending the country hurtling toward the apocalypse.

Issa’s statements at the Pew conference reveal ignorance about how bank lending works in the modern era. When you go to a bank and ask for a loan, the banker does not check the bank’s deposits or reserves before she lends you money.

As some economists have observed for decades and the Bank of England recently detailed, financial institutions do not lend pre-existing funds at all, but instead create “money” out of thin air as they lend. When you receive a loan, the bank also places your funds in an account, simultaneously expanding both the asset and liability sides of its own balance sheet. That’s how banking works.

As such, as long as postal banks are granted the same legal license as private banks—notably access to the federal discount window and interbank lending—the financial stability of postal lending would not depend on some hoarded Scrooge McDuck vault of taxpayer money.

The fire next time

When the next financial crisis hits, a postal bank might need a bailout—but it’s less horrifying than your typical private bank bailout.

During the last crisis, arguments were made that Wall Street firms had to be rescued in order to save Main Street. If preventing Main Street from falling into the flames along with Wall Street is indeed a national concern, then a stable postal banking system—a safe place for most people’s money—could be our best defense.

Although some advocate for a public-private partnership with existing commercial banks, postal banks could instead become an integral piece of a new financial architecture insulating the public and Main Street businesses from the storms of high finance.

For example, imagine the economy busts and people start to lose their jobs. The Federal Reserve could directly credit post office accounts, either with flat transfers, or preferably wages for federally funded jobs. This policy would inject money into Main Street and stabilize prices and wages.

And if you don’t like that idea, as even conservative commentator Reihan Salam at The National Review has recognized, a strong postal banking system could eliminate the need for federal deposit insurance and create more room for the private financial sector to innovate as it pleases. As a corollary, if trauma to Main Street could be avoided via the postal banking system, the case for bailing out Wall Street would lose steam.

To put it bluntly, there’s a strong case for the more affluent clients of commercial banks and the broader public to go their separate ways.

Some progressives and populists might prefer a policy more cooperative or decentralized, but this is the immediately viable alternative to the status quo. The U.S. Conference of Mayors just endorsed the idea and Rep. Cedric Richmond (D–La.) just introduced legislation in the House of Representatives. Although Postmaster General Donahoe is against postal banking, many of his workers, managers, union leaders, regulators, and lawyers support it.

And soon the Postmaster’s endorsement won’t matter. President Obama is filling vacancies on the USPS Board of Governors: There are now 4 Democrats and 4 Republicans and the remaining seat will likely go to a Democrat—at which point the Board can override the Postmaster General.

There might be a confrontation in the courts, but under the Supreme Court ruling in Chevron v. NRDC, agencies are granted wide latitude to interpret their governing statutes. So USPS would likely survive a challenge to providing basic financial services.

Postal banking should be part of every social justice rallying cry. According to the Pew survey results, 31 percent of the unbanked said they would open an account at their local branch. Eighty-one percent of the underbanked said they would use USPS to cash checks, 79 percent percent to pay bills, and 71 percent would choose postal loans over payday loans. That’s 71 percent who could pay for food, childcare, and transportation instead of exorbitant fees on small loans.

These numbers are monumental and they reveal a widespread desire for a public option for basic financial services.

USPS has a duty of public service and can at least be held more accountable than potential servicers like WalMart, which has been moving into the AFS market. Instead of bringing megastores and megabanks to communities lacking credit, we could be asking the federal government to do its job and provide economic security and opportunity.

It’s time to push the envelope.

Raúl Carrillo wrote this article for YES! Magazine, a national, nonprofit media organization that fuses powerful ideas and practical actions. Raúl is a student at Columbia Law and a graduate of Harvard College. He is a co-organizer for The Modern Money Network (MMN), an interdisciplinary educational initiative for understanding money, finance, law, and the economy. Follow him at @ramencents.