Bannering Against War in Baltimore

Above: Baner over Rt. 83 in Baltimore on May 14. Photo courtesy of Richard Ochs, bmore4peace.org. 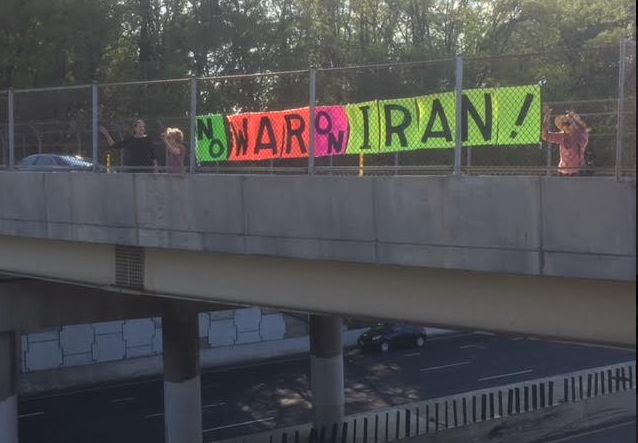 No War on Iran banner on Rt. 83. Photo courtesy of Richard Ochs, bmore4peace.org.

Urging Peace On the Highway to Pikesville

At 4:30 PM, when the bosses left work early to beat the rush to the northwest Baltimore suburbs, there were few waves and honks at our banner “Israel Stop Killing Protesters.” Neither were there digits of disapproval. But by 5:30 when the workforce passed under our bridge over the Jones Falls Expressway, the waves and honks were noticeably more frequent. Sympathy for our protest more than doubled as traffic slowed in the 5 o’clock rush. The fingers of foes also increased, but were still only one out of 20 waves, thumbs up and honks of support. At first, the silence was deafening, compared with last week’s banner du jour “No War on Iran!” when support was twice as evident.

Perhaps the shock of seeing the word “Israel,” portrayed as something less than utopian in northwest Baltimore, caught commuters by surprise. The lack of knee-jerk response in the pre-rush might indicate some soul-searching introspection, or at least one would hope.

Indeed, one motorist got off the highway and walked onto the bridge to talk to us. He was an Israeli who spoke with an accent and was quite concerned, but polite. We had a frank conversation and no voices were raised. I was surprised at his naiveté of defending shooting hundreds of protesters as justifiable because, as he said, he thought some were going to throw Molotov cocktails at Israeli soldiers.

I pointed out that no soldiers were hit or hurt by bottled fire but he said that was because soldiers shot throwers preparing to throw. I replied that the 1,700 protesters wounded by bullets on Monday were farther away than throwing distance and even if a gasoline bottle hit a soldier, it would be deflected by their shields. I described some less lethal methods of crowd control than murder and massacre.

I took the conversation to Israel taking the land from Arab inhabitants and he repeated the mantra that there is no such thing as “Palestine.” Having exhausted any possibility of agreement, we bid each other adieu and he left.

Our count of 130 cars per minute during rush hour totals to 7,800 vehicles per hour of visibility. We could not ask for a better captive audience.

Only once did the police come, claiming a complaint by a motorist. We removed our banners from the “State property” chain-link fence at their command and have held banners on poles ever since with no problem.

Other banners “No War on Russia” and “bmore4peace.org” are occasionally displayed depending on current events and number of volunteers. Our weekly bannering started in February with “Keep the Korean Olympic Truce” and another depicting a mushroom cloud versus hands shaking. We will be on the JFX overpass at 700 Wyman Park Drive at least once a week, depending on the weather.

Come and help us wave to motorists and hear the beeps. Some visceral reinforcement gives the psyche some refreshing rejuvenation.

More information: There are many maps with Palestine listed as the area where Israel now exists. Here is a website with a bunch of Palestine maps. There are many more sites like this as it is a common argument that Zionists make that Palestine never existed. 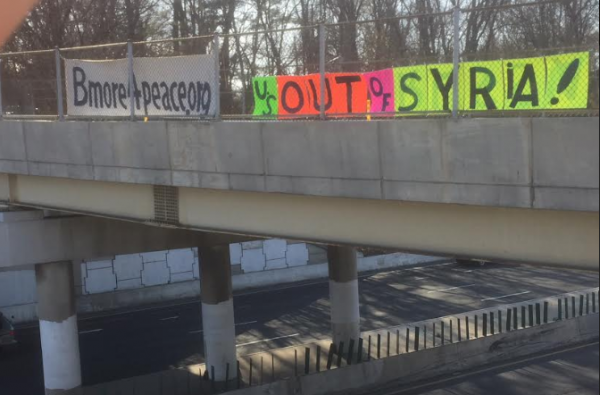 US out of Syria banner over Rt. 83 in Baltimore. Photo courtesy of Richard Ochs, bmore4peace.org.