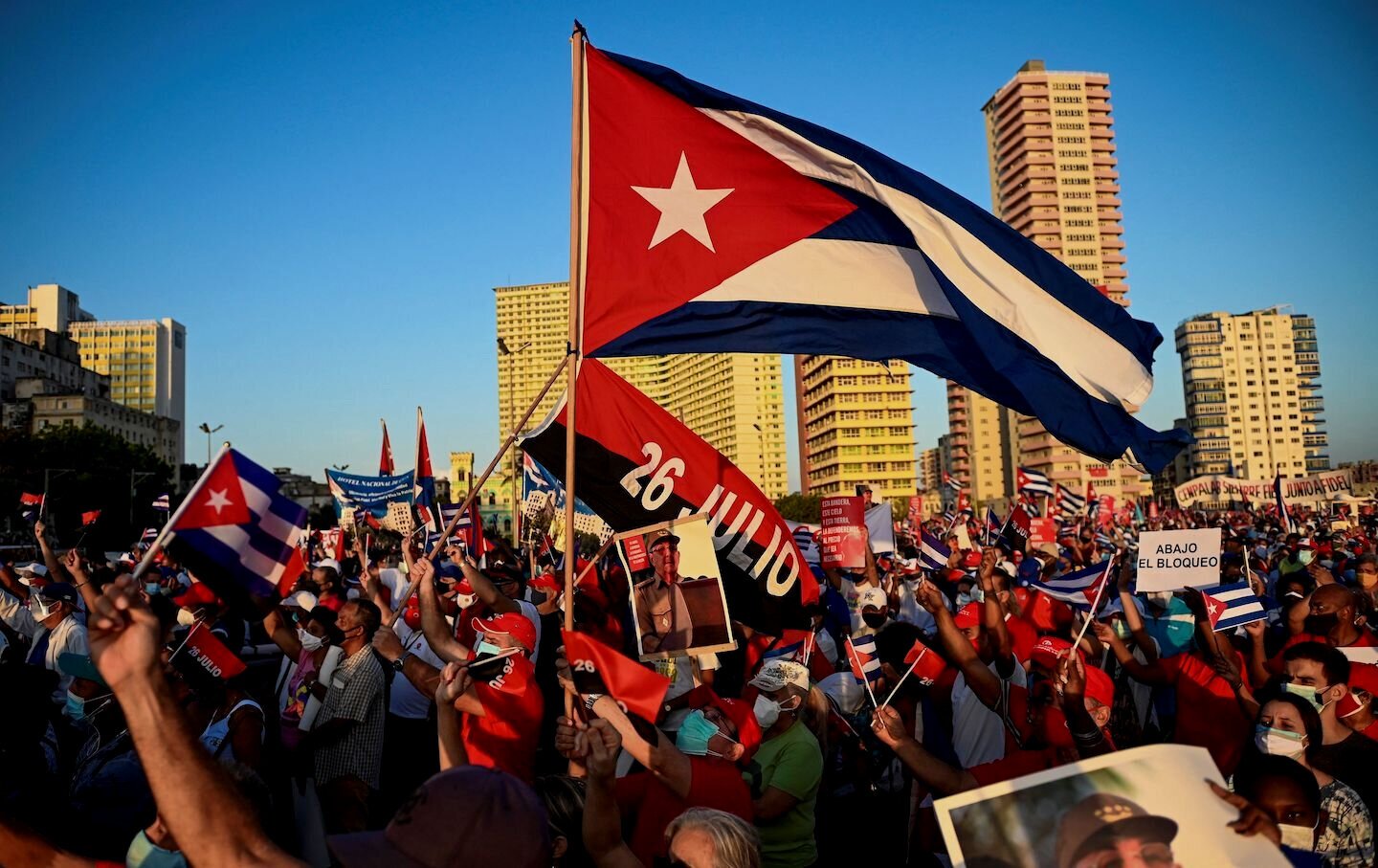 BAP Condemns US Sponsorship Of Anti-Government Protests Against Cuba

Above Photo: Cuban supporters of the government of President Miguel Diaz-Canel at a demonstration in Havana on July 17, 2021. Yamil Lage / AFP.

The US government continues to amplify its war on the Cuban people through political, economic, and media efforts. In their own words, the US State Department has announced its role in organizing reactionary protests in Cuba, scheduled for November 15 as a continuation of the #SOSCuba campaign that began in July. The US has also preemptively threatened to place even more sanctions on Cuba if it deems that the Cuban government has interfered with the protests. As we know, sanctions kill, and while these will be framed as supporting human rights, the 60+-year long blockade and recent Trump and Biden administration crackdowns are war tactics that represent violence against the Cuban people, particularly Afro-Cubans.

The Black Alliance for Peace’s Haiti/Americas Committee recognizes these signals as part of a long-term concerted attempt to destabilize and delegitimize the Cuban government, whose socialist principles and decades-long defiance of US imperialism are unacceptable to the US white supremacist empire. As Mint Press News has reported, the US appears to be exerting a ‘soft power’ strategy to orchestrate a color revolution in Cuba, co-opting language around human rights and racial justice while simultaneously ignoring such concerns at home.

We condemn this interventionism by the US government, and call on all supporters to stand in solidarity with the Cuban people and against the broad US war on Cuba. We also recognize these acts as a continuation of US-sponsored regime change, capitalist exploitation, and military intervention in the region – from Haiti to Bolivia to Nicaragua and beyond. We must stay vigilant of US propaganda, such as false claims of “Havana Syndrome,” US State Department statements preemptively dismissing the democratic elections in Nicaragua, and the dubious deployment of charges of antiBlackness against Cuba. We must also condemn attempts by US liberals to co-opt and weaponize radical language to garner support from the US left. Included below are a few opportunities to show solidarity:

War on Cuba series: Belly of the Beast Cuba has recently launched the second season. Black Alliance for Peace’s Haiti/Americas Committee will co-sponsor a webinar with Belly of the Beast on Saturday November 20th at 5pm EST ****to discuss the US war on Cuba’s impact on Afro-Cubans and the connections to broader US militarism and imperialism in the Americas.

Political Education: As a starting point, we recommend BAP member organization Hood Communist’s Guide to understanding the US blockade on Cuba – Don’t Get Caught Slippin’. Belly of the Beast’s recent Instagram series of #FromUnderTheEmpire offers a brief overview of the history of Cuban struggle against imperialism, from 1800 to present.

The people of Cuba have endured decades of insults, attacks, and systematic subversion but their revolutionary moral has not been broken. The Black Alliance for Peace will never abandon the Cuban people. We remember how revolutionary Cuba responded to the call made by African comrades to help them confront the colonial occupations. BAP pledges to stand with Cuba today, ready to sacrifice and struggle until victory.