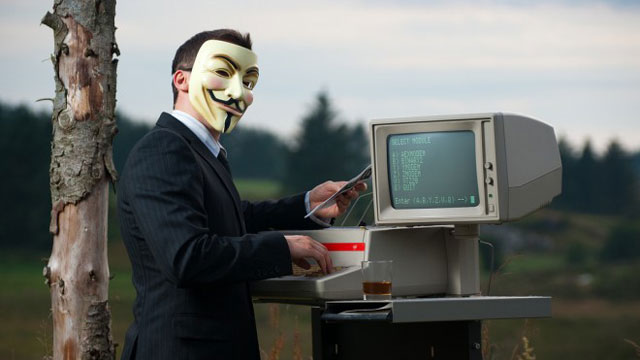 Brown is not a household name like Edward Snowden or Bradley Manning. But after helping expose a dirty tricks plot, he faces jail

Any attempt to rein in the vast US surveillance apparatus exposed byEdward Snowden‘s whistleblowing will be for naught unless government and corporations alike are subject to greater oversight. The case of journalist and activist Barrett Brown is a case in point.

Brown made a splash in February 2011 by helping to uncover “Team Themis”, a project by intelligence contractors retained by Bank of America to demolish the hacker society known as Anonymous and silence sympathetic journalists like Glenn Greenwald (now with the Guardian, though then with Salon). The campaign reportedly involved a menagerie of contractors: Booz Allen Hamilton, a billion-dollar intelligence industry player and Snowden’s former employer; Palantir, a PayPal-inspired and -funded outfit that sells “data-mining and analysis software that maps out human social networks for counterintelligence purposes”; and HBGary Federal, an aspirant consultancy in the intelligence sector.

The Team Themis story began in late 2010, when Julian Assange warned WikiLeaks would release documents outlining an “ecosystem of corruption [that] could take down a bank or two.” Anticipating that it might be in Assange’s sights, Bank of America went into damage-control modeand, as the New York Times reported, assembled “a team of 15 to 20 top Bank of America officials … scouring thousands of documents in the event that they become public.” To oversee the review, Bank of American brought in Booz Allen Hamilton.

Days later, Bank of America retained the well-connected law firm of Hunton & Williams, which was reportedly recommended by the Department of Justice. Hunton & Williams promptly emailed HBGary Federal, Palantir and Berico; they, in turn, “proposed various schemes to attack” WikiLeaks and Greenwald. In fact, Hunton & Williams had first contacted the three tech firms in October 2010, at the behest of the Chamber of Commerce to find out if it was being attacked by labor union-backed campaigners.

The final cast member, Aaron Barr, then CEO of HBGary Federal, started creating personal dossiers on Hunton & Williams employees to display his prowess as a social media ninja – his way of convincing the law firm that he could train them in the perils of social media. Barr was anxious to generate income for his struggling subsidiary.

According to the Team Themis proposal, its partners suggested creating false documents and fake personas to damage progressive organizations such as “ThinkProgress, the labor coalition called Change to Win, the SEIU, US Chamber Watch, and StopTheChamber.com”.According to reporting by Wired, the three companies hoped to bill the Chamber of Commerce for $2m a month. But while (as leaked emails showed) the parties in the plan went back and forth over how to apportion the spoils, nothing was forthcoming.

“Feed[ing] the fuel between the feuding groups. Disinformation. Create messages around actions to sabotage or discredit the opposing organization. Submit fake documents and then call out the error.”

They also proposed “cyber attacks”, using social media “to profile and identify risky behavior of employees”, and “get people to understand that if they support the organization we will come after them”, implying threats.There was also email chatter about attacking journalists with “a liberal bent”, specifically naming Greenwald. Some aspects of the Team Themis proposal were reminiscent of a leaked 2008 Pentagon counterintelligence plan against WikiLeaks.

In early January, email messages from HBGary Federal show plans for a meeting with Booz Allen Hamilton, apparently regarding Barr’s plans against WikiLeaks and Anonymous. At this point, no one was buying Barr’s scheme – even as he bragged to the Financial Times, on 4 February 2012, that he had used Facebook, Twitter and other social media to identify the “leaders” of Anonymous.

Barr believed that had piqued the interest of the “FBI, the Director of National Intelligence, and the US military”. In fact, it had merely made him a marked man: two days later, as Wired reported, Anonymous “took down [HBGary Federal’s] website, stole his emails, deleted the company’s backup data, trashed Barr’s Twitter account and remotely wiped his iPad.” For his part, Brown created Project PM, “a crowd-sourced wiki focused on government intelligence contractors” to delve through the tens of thousands of emails taken from HBGary Federal’s servers.

A critical element in the story concerns the fact that, according to one of the leaked emails, the companies were hoping that “if they can show that WikiLeaks is hosting data in certain countries it will make prosecution easier.” The hacked emails also revealed, Forbes reported, that Barr was hoping to sell the information on Anonymous members to the FBI. The fact that Barr was stoking interest among security agencies with a dossier of supposed Anonymous members containing incorrect namesmeant that innocent people might have been jailed if he had succeeded in his scheme.

Barr resigned and HBGary Federal was subsequently shuttered. But the story doesn’t end there. In July 2011, the Anonymous-linked “AntiSec” raided Booz Allen Hamilton and made off with 90,000 emails. One allegation that emerged from the cache was that BAH had been working with HBGary Federal “to develop software that would allow for the creation of multiple fake social media profiles to infiltrate discussion groups and manipulate opinion on the sites and discredit people, as well as to match personas online with offline identities.”

Within days of the Team Themis scandal, Palantir issued a statement announcing that it was cutting ties with HBGary Federal and issued an apology to Greenwald. Its reputation was at stake: in 2011, it scored $250m in sales and its customers included the CIA, FBI, US Special Operations Command, army, marines, air force, LAPD and NYPD. Tim Shorrock, an intelligence industry analyst, believes that with an immigration bill working its way through Congress that will provide billions of dollars for border enforcement, Palantir is also well-positioned to win new clients like ICE and the DEA. Along with Booz Allen Hamilton, Palantir is reportedly being paid by the government to mine social media for “terrorists”.

They are just a few of the nearly 2,000 private companies involved in the US counterterrorism, homeland security and intelligence apparatus. Even as HBGary Federal has disappeared, the privatized surveillance state continues to expand. The privatized intelligence budget alone is estimated at $56bn.

Given the revelations about domestic surveillance, Brown could speak volumes about the nexus between corporations and the state – except that he’s been cooling his heels in a jail outside Dallas, Texas, for 290 days, awaiting two separate trials that could put him on ice for more than 100 years. The US government has slapped Brown with 17 counts that include identity theft, stealing thousands of credit card numbers, concealing evidence, and “internet threats”.

Ahmed Ghappour, attorney for Brown, calls the charges “prosecutorial overreach”, and maintains most are related to legitimate journalistic practices, such as cutting-and-pasting a link and refusing to give the FBI access to his sources on a laptop, “a modern-day notebook”. In contrast to the FBI’s aggressive pursuit of Brown, no probe of the Team Themis project was launched – despite a call from 17 US House representatives to investigate a possible conspiracy to violate federal laws, including forgery, mail and wire fraud, and fraud and related activity in connection with computers. Ghappour asks:

“What length will the government go to prosecute journalists reporting on intelligence contractors? Brown was one of the first to report on the plan to take down Glenn Greenwald.

“It was clear Booz Allen Hamilton [whistleblower Edward Snowden’s former employer] was consulting with the NSA, at least supporting their mass-surveillance program, and this was one of the leads Barrett was chasing at the time of the arrest.”

“Who’s policing the corporations? Who’s holding them accountable to the same standards as our government? And we need to question those standards given incidents like the Obama administration seizing the phone records of the AP.”

On Christmas day 2011, the intelligence-analysis firm Stratfor, which Anonymous accused of running a wide-ranging spying operation, was hacked. Brown was the one who alerted the mainstream media to the hack: among the millions of files released were thousands of credit-card names and numbers. Like many, Brown posted a link to the files; it was this that the government would seize on to indict Brown for credit-card theft. According to Ghappour:

“That link was accessible to anyone in the world with an internet connection. That link was shared hundreds or even thousands of times that day but Barrett was the only one that was indicted.”

On 6 March 2012, the FBI raided Brown, looking for among other things “records related to HBGary [Federal]”. Under growing pressure, Brown posted a YouTube rant in September 2012, in which he spoke of his opiate use and made reference to the Zetas, a ruthless Mexican drug cartel. Speaking to his computer screen, Brown warned that “any armed officials of the US government, particularly the FBI, will be regarded as potential Zeta assassin squads and … I will shoot all of them and kill them.” Clearly, Brown felt persecuted, but it was an ill-advised statement, which has led to jail without bail for nine months and a harsh list of indictments.

Ghappour asserts there is a logic why the government is keen to prosecute private contractor whistleblowers and activist journalists like Brown:

“The problem is you have companies doing very sensitive intelligence work for the government. It follows that the enemies of those companies are your own [enemies]. And it would be in their interest to silence or prosecute journalists investigating those companies.”

Because of his role as a muckraking reporter, Brown has attracted defenders like Glenn Greenwald and Rolling Stones’ Michael Hastings, who died last week in a car accident. Yet, perhaps because he wasn’t as high-profile as Bradley Manning or as unassailable as Aaron Swartz, Brown hasn’t attracted the type of support that can effectively pressure the government. But with the light thrown on the privatised national security state by the leaks from former BAH contractor for the NSA Edward Snowden, there is renewed interest in Brown’s plight and thecampaign for justice in his case.