Starting at around 4:30 AM, barricades went up outside of the entrances to the University of California in Santa Cruz (UCSC), effectively shutting down the campus. Over the next 8 hours, thousands of students, faculty, and staff took part in mass rallies and marches across almost the entire UC system, as more campuses announced that they were also joining the wildcat strike which had begun in Santa Cruz in early February. Since then, according to UCSC strikers on the ground, almost 20 people have been arrested on the picket lines and at least 80 student workers have been fired from their positions as teaching assistants.

The system wide “Blackout” strike on Thursday was an escalation for the growing wildcat strike movement on UC campuses, and shows that there is increasing support for mass collective action to demand a cost of living wage increase (COLA). This activity also comes as the UC system has attempted to frighten student workers off the picket lines by a combination of violent riot police which have injured several strikers, the threat of potential firings, and in the case of international students, potential deportation.

As day of actions have spread to all UCs, faculty here at UCM have received emails from high level administrators in order to “protect” or “save” grades before TAs “delete” them.

While it is taking time to continue demonstrations, #UCM4COLA is COMING and stands in solidarity.

At the time of this writing, two campuses, both UC Santa Cruz and UC Santa Barbara (UCSB), are both on full strike, meaning there is both a grading strike (teaching assistants are not turning in final grades) as well as a teaching strike (grad student workers are not teaching classes). While UCSC grad students have been on strike since early February, they have been withholding grades since last year. Joining strikers in Santa Cruz has been grad student workers at UCSB, who launched their strike last Thursday. Meanwhile, at UC Davis, workers there kicked off a grading strike for the Winter 2020 quarter. Starting next Monday, student workers at UC San Diego will also begin a grading strike, as strikes are currently being planned at UC Berkeley and UCLA campuses as well.

During today’s UC-wide day of action UCLA graduate students voted in favor of joining the strike! Along with UC Berkeley, we voted to instate a 10 department critical mass. Once 10 departments have voted in favor our FULL STRIKE will be triggered. NO COLA, NO GRAD LABOR. pic.twitter.com/lonKAZsrPB

From Pay Us More UC:

Strikers and allies across the UC system reject an institution that would dispose of them rather than negotiate; when you fire 10% of your graduate workers, nothing can be normal. But beyond this, strikers are fighting against the cruelty that has become normalized on this campus. The COLA movement was sparked because many hundreds of graduate students and many thousands of undergraduates experience daily precarity, hunger, trauma, homelessness, and marginalization, and because this institution has consistently failed to meet its student’s basic needs. Strikers reject an institution where students skip meals and sleep in cars to make ends meet, and reject an administration that would fire them for not wanting to live that way. Together we fight for ourselves, for our friends, for the future of higher education, and for the university that we need.

What follows is a roundup of actions that took place on different UC campuses across the state of California on Thursday, March 5th.

On Thursday, hundreds of students gathered at UC Berkeley’s Sproul Plaza to rally support for staging a strike of their own, while students at the other UC campuses held picket lines and rallies.

“Cops off campus! COLA in my bank account!” students chanted, referring to cost of living adjustments, as they listened to speeches by UC Berkeley student-workers and visiting students from UC Santa Cruz.

🚨🥤🎉 The graduate students in the Department of Ethnic Studies at UC Berkeley have declared themselves STRIKE-READY!!! This is such a beautiful letter. pic.twitter.com/mnp5ynESMr

Hundreds of students marched around the campus in solidarity with fired Santa Cruz workers and to demand COLA.

In the early morning, barricades at the UC Santa Cruz campus went up at the two entrances into the university, effectively shutting down the campus for hours. Vitalist International wrote on Twitter: “At #UCSCstrike, striking workers, students, and others erected barricades at every entrance of campus around 5am. All classes canceled. #cola4all movement escalated after Janet Napolitano fires…strikers.”

In a statement on Pay Us More UC, Joe Klein wrote:

Today [Thursday, March 5] was another historic day in labor history at UCSC and across the UC system. For the 18th day of the strike, hundreds of graduate students, undergraduates, faculty, staff, lecturers, and others successfully closed down UCSC’s main campus for the entire working day. Two hard picket lines were created just beyond Family Student Housing on the west side, and just beyond Faculty Housing on the east side, to ensure that our colleagues and friends would be able to get easily in and out of their homes, while other traffic easily passed out from campus at both entrances. Students hung a banner from the FSH bridge reading “EAT THE REGENTS” while east picketers were joined by a giant goose puppet (#honkforcola) on the barricade.

All classes were cancelled; instead, students fed each other, held teach-ins, jumped rope, learned new dances, organized their own transportation, and made new friends, while outside of Family Student Housing, families and children came out to play in the streets. Standing together–building power and building community–strikers reminded administration who runs this campus.

UCSC blackout starts now! No class, no work all day! Campus is shut down in solidarity with fired grad student workers on strike for a Cost of Living Adjustment. #ucscstrike #cola4all #colastrike pic.twitter.com/G75Uku9kNO

UCSC blackout starts now! No class, no work all day! Campus is shut down in solidarity with fired grad student workers on strike for a Cost of Living Adjustment. #ucscstrike #ucscshutdown pic.twitter.com/eastqg1wEt

Blockades were erected into the entrance of Cheadle Hall on the campus which then turned into an occupation of the building. A massive march was later organized across the UCSB campus.

According to Daily Nexus:

UCSB 4 COLA took over Cheadle Hall Thursday morning as part of a UC-wide work-stoppage, blocking the doors to the building and refusing to let anyone into the building. After a brief confrontation with administration, graduate students moved inside, occupying every floor of the building.

Graduate students are blocking entrances to Cheadle Hall today as part of the COLA movement work stoppage, which UC campuses across the system are holding today. pic.twitter.com/WnswbKHh44 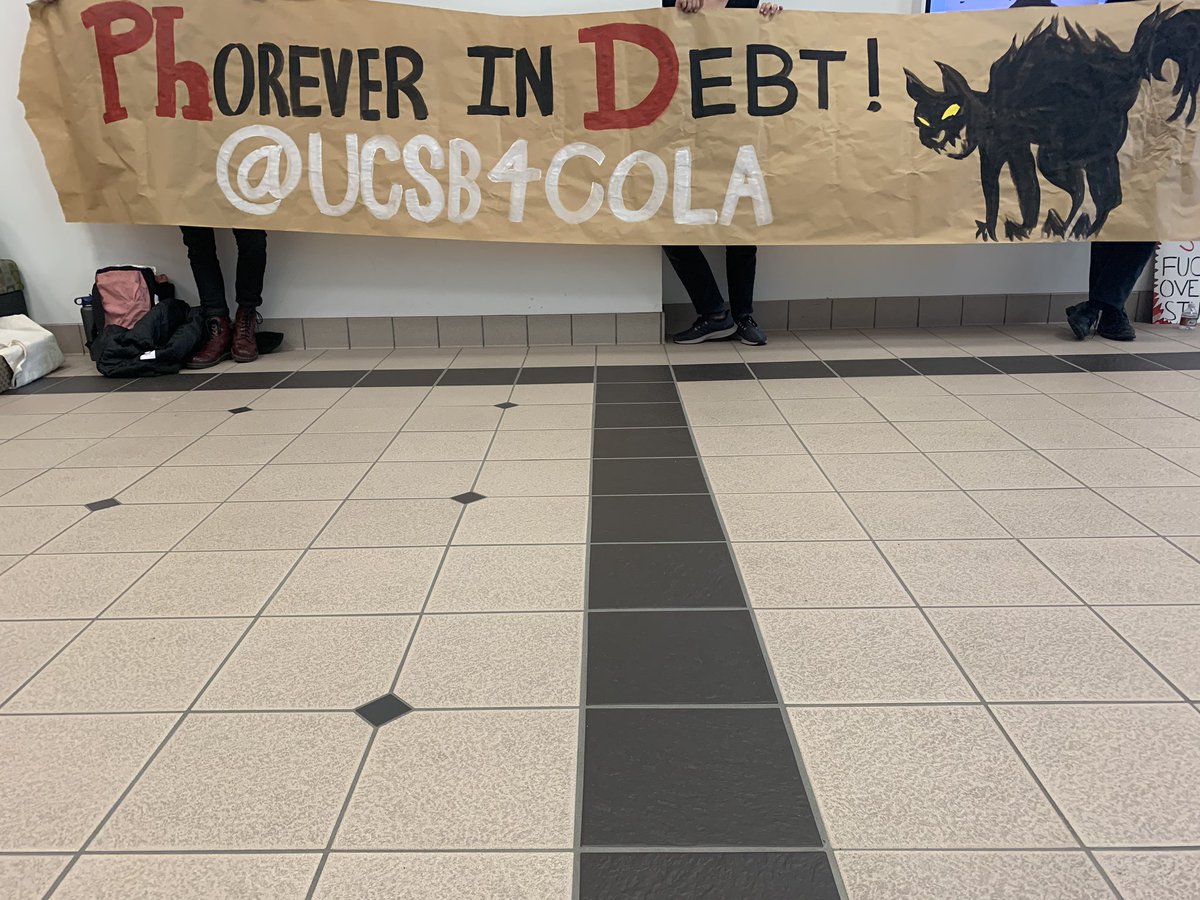 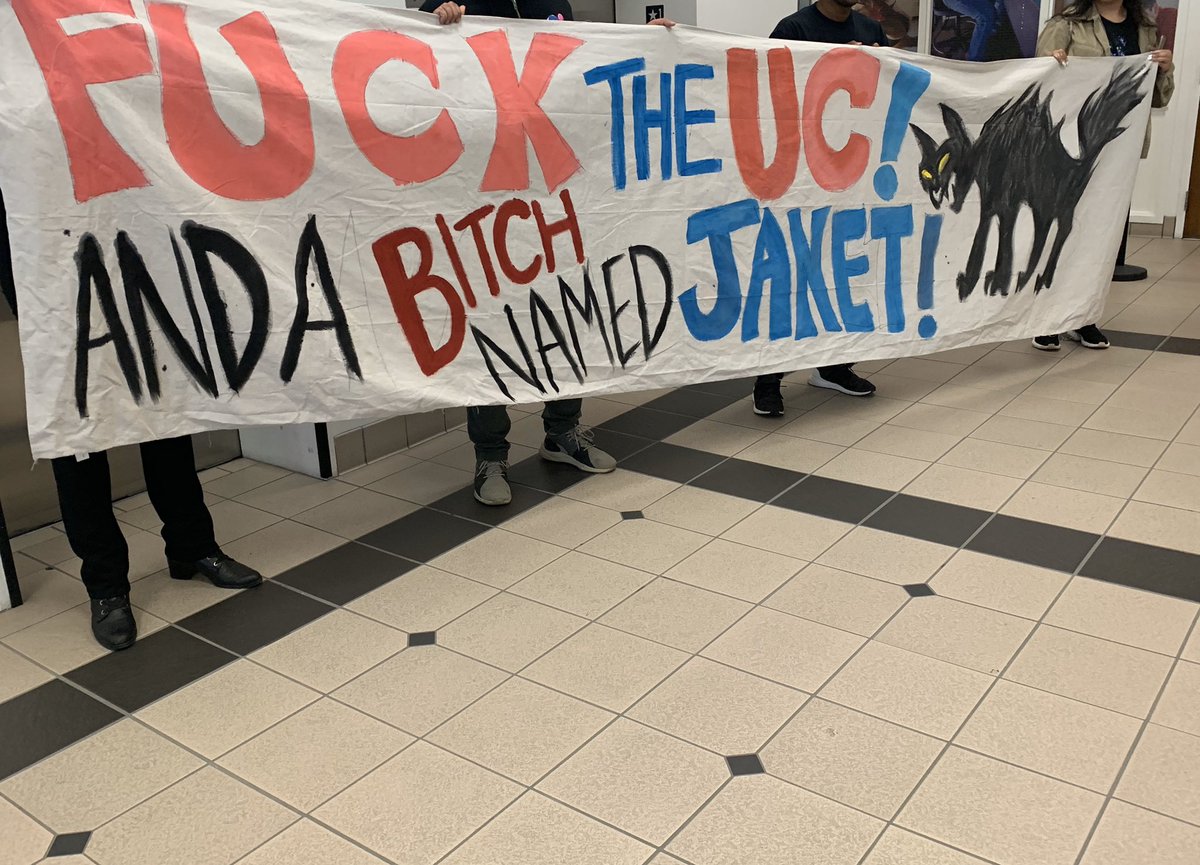 After talks with police officers and Vice Chancellor for Student Affairs Margaret Klawunn, organizers have stopped blocking the doors and have moved inside the building and are chanting “Don’t cross the picket, don’t be a scab” at people entering the building.

Graduate students have stationed people on every floor of Cheadle Hall. 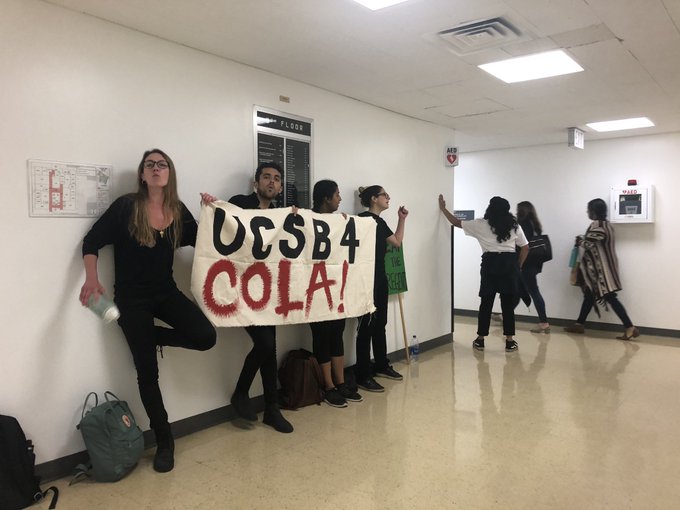 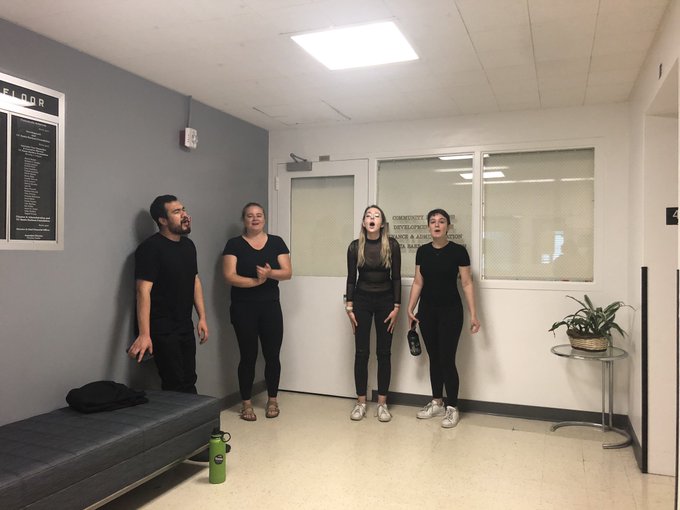 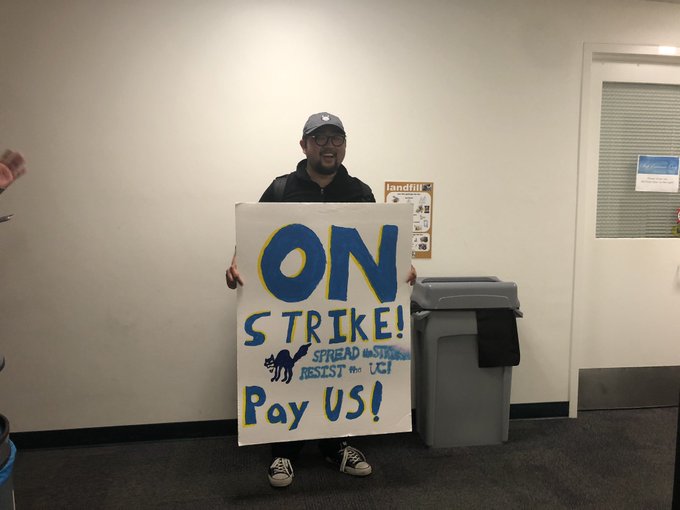 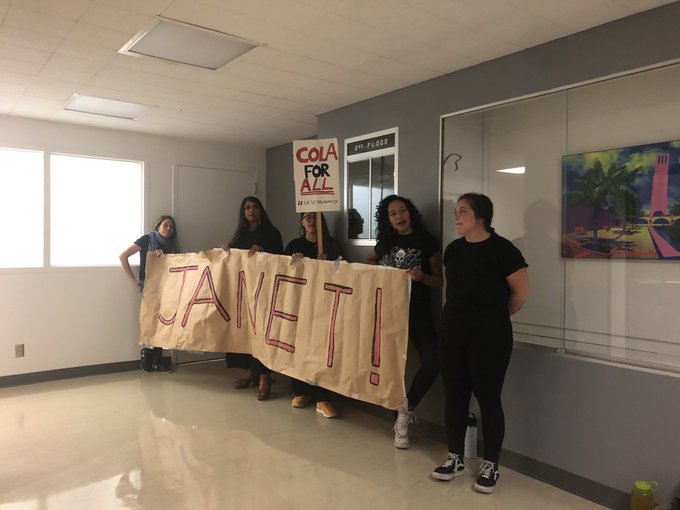 We’ve taken over every floor at Cheadle Hall and blocked the elevators! Don’t cross the picket! SHUT IT DOWN#ucsbstrike #copsoffcampus #COLA4ALL 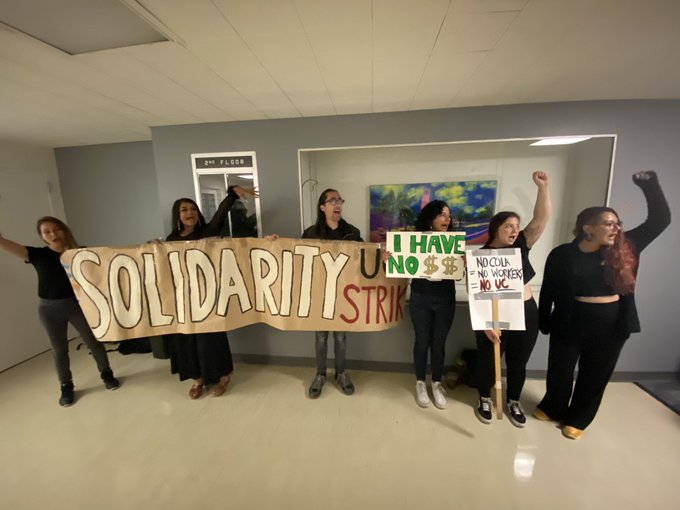 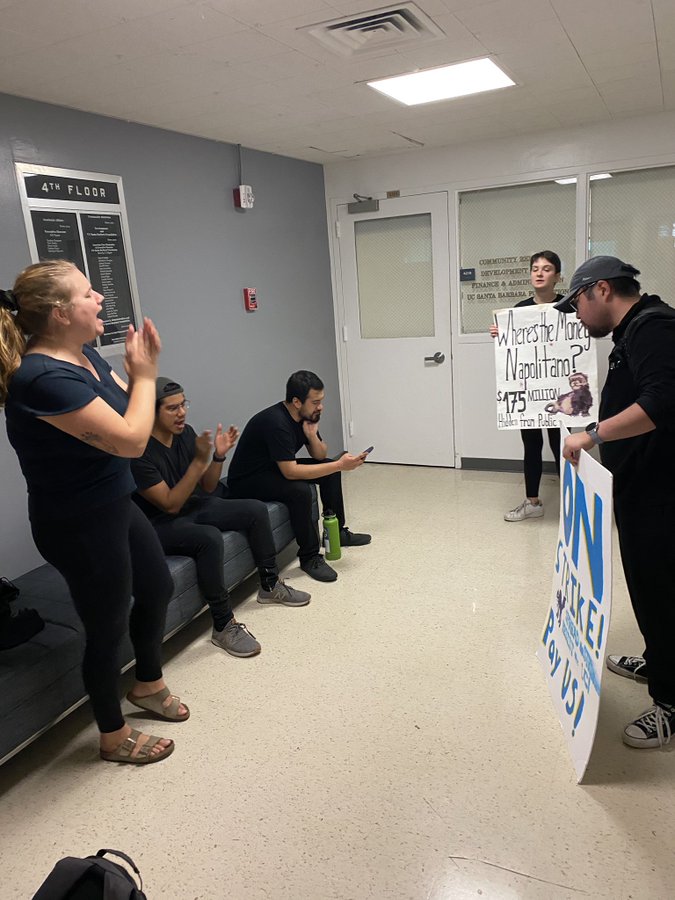 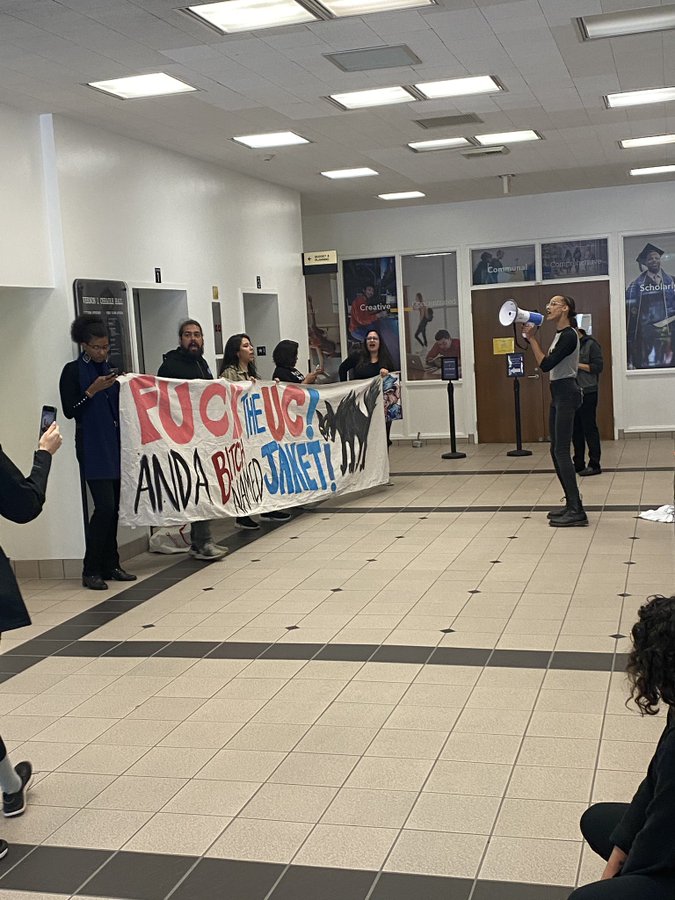 60 people are talking about this 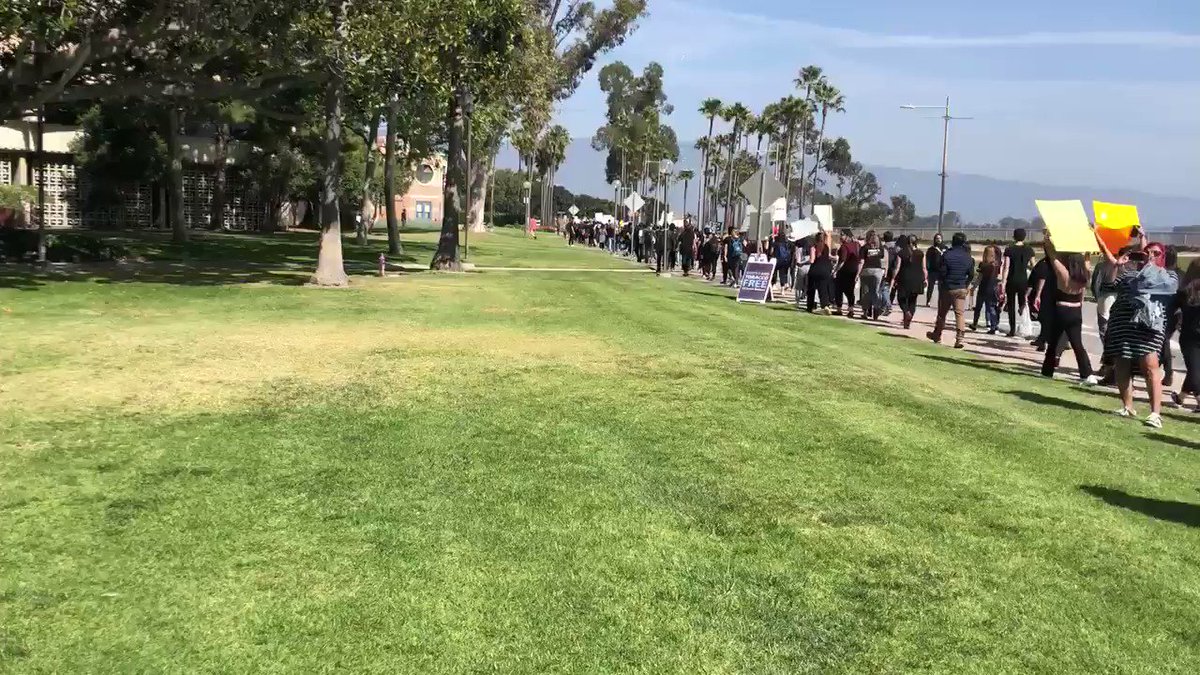 157 people are talking about this 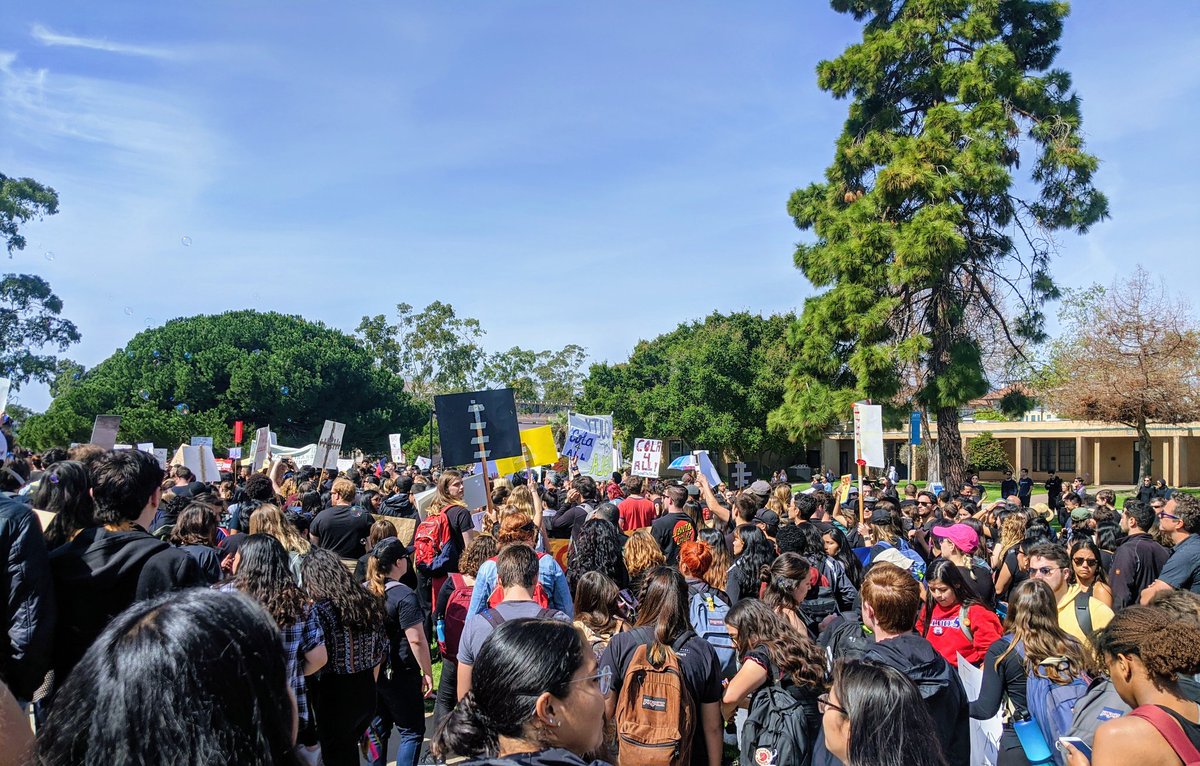 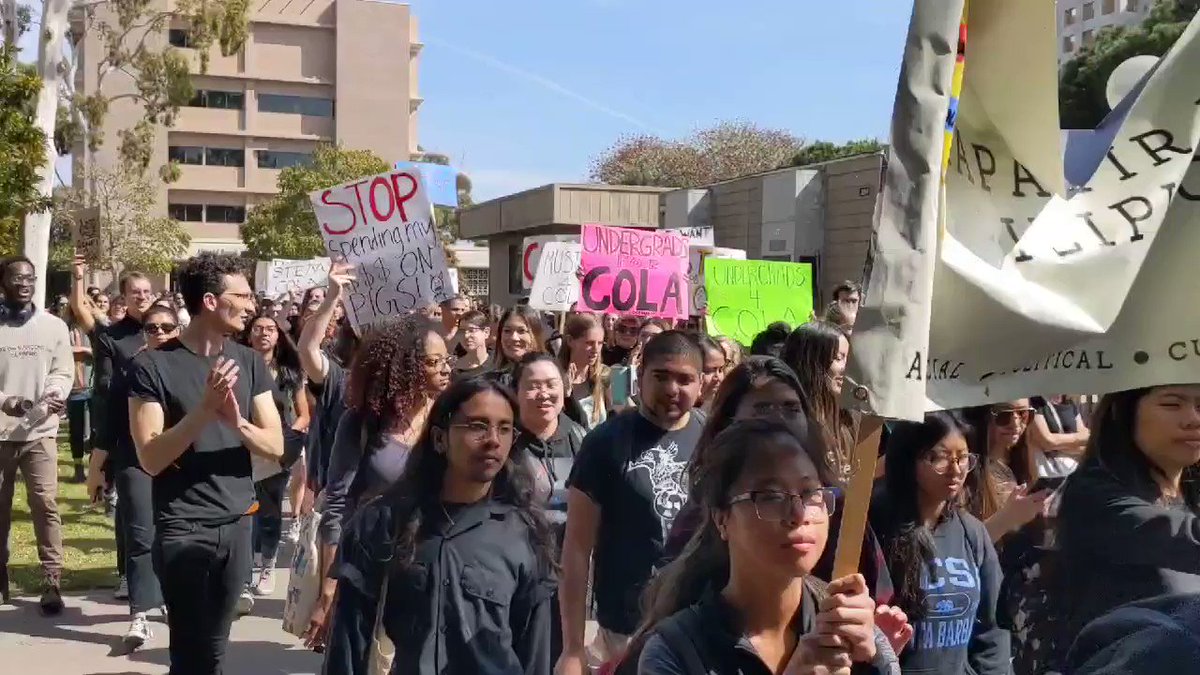 The strikers are now marching to Henley Gate, where they plan to continue the rally. 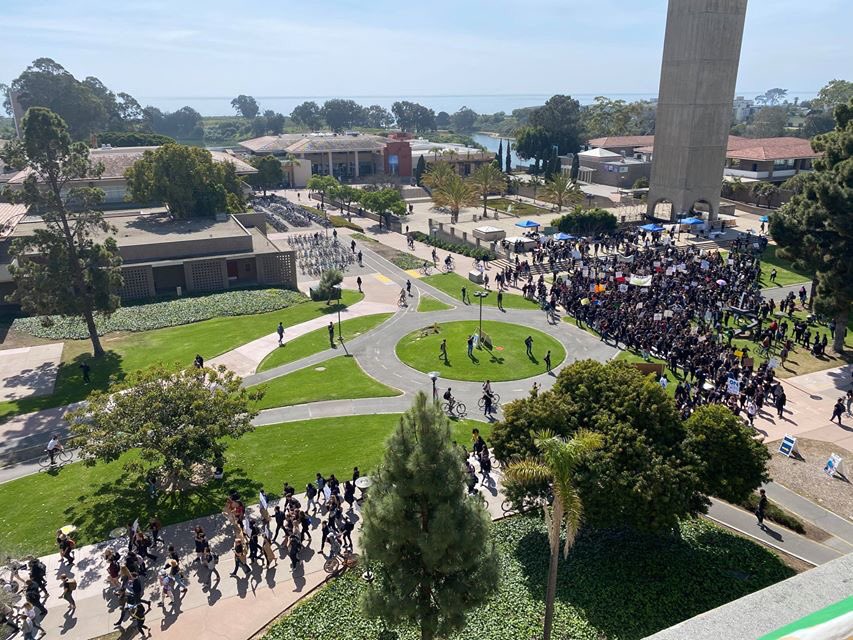 At Henley Gate, the crowd looks like it’s grown to at least 1000 people. 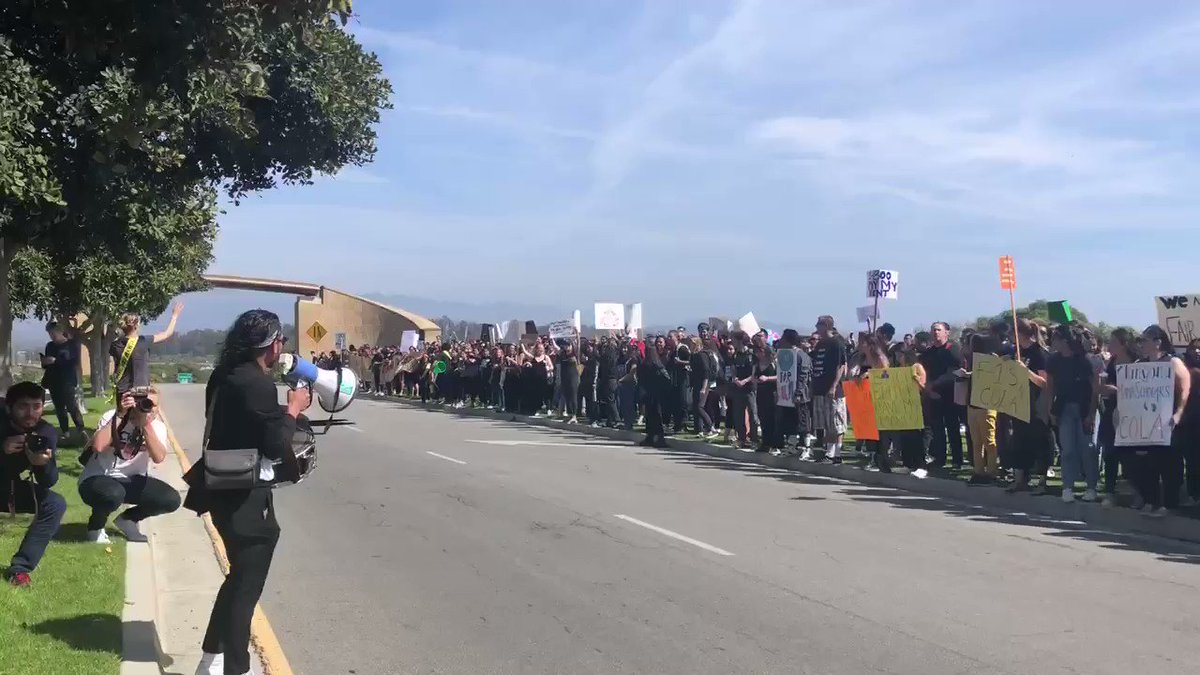 49 people are talking about this

Large march and rally on campus organized in solidarity with arrested strikers and to demand COLA. 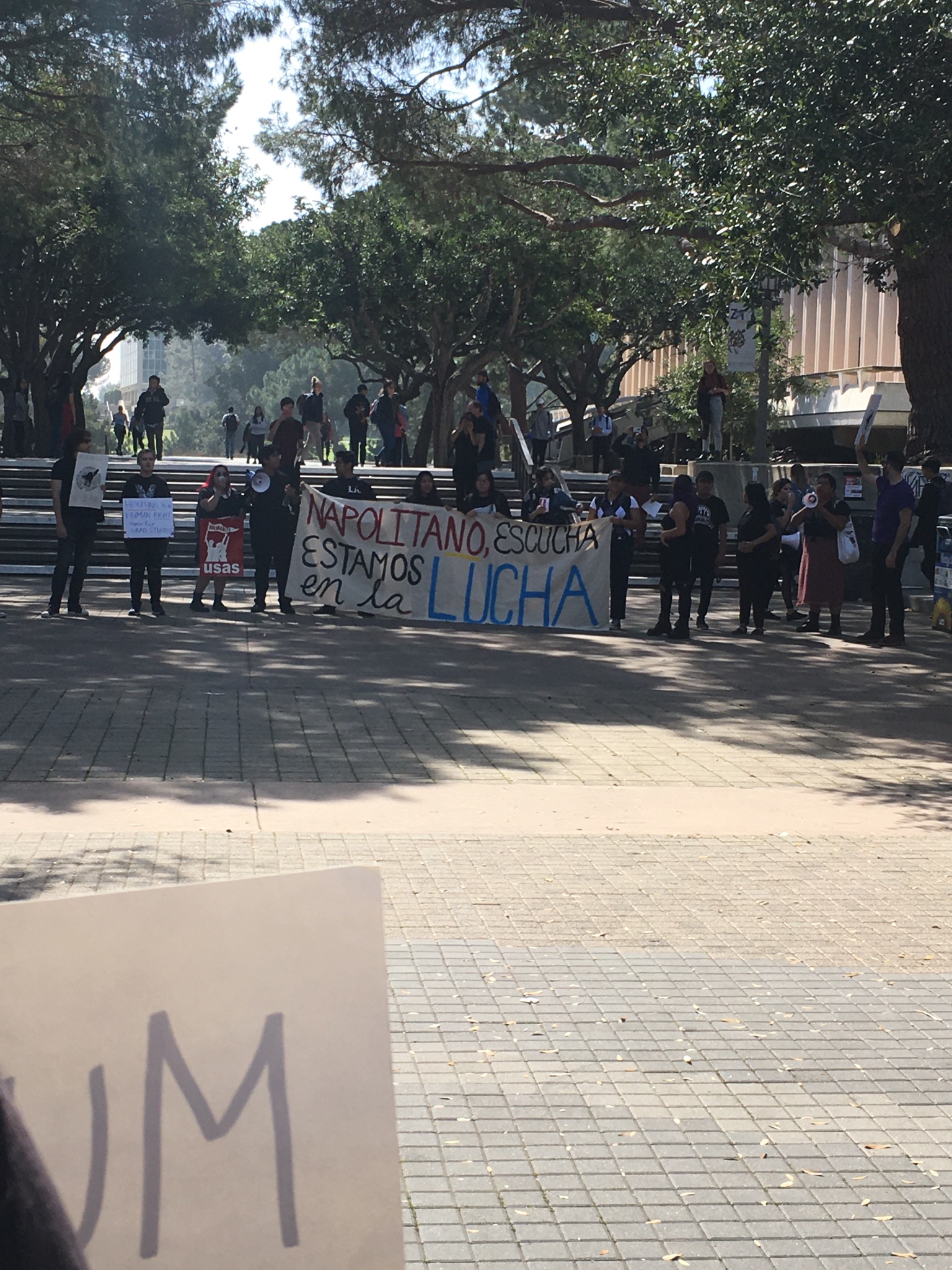 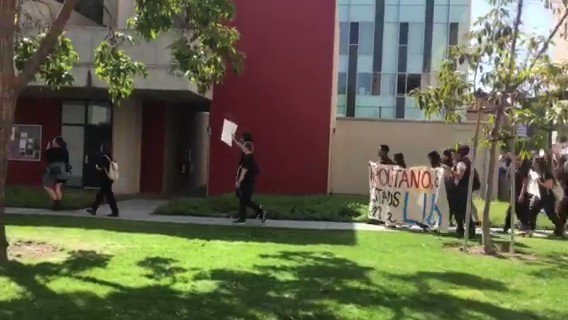 17 people are talking about this

I have been at @UCIrvine since 2016 and I have NEVER seen a protest like this before. Be scared, UCOP. We’re coming for our #COLA. pic.twitter.com/sD6QIRyOvM

So excited to hear and see UCI students supporting #cola4all

67 people are talking about this

Mass march and rally on campus organized in support of arrested strikers and to demand COLA.

Graduate students at the University of California #Riverside marching. Chanting “Janet Janet we can’t stand it. Give us #COLA we demand it!” @UCRiverside @UCRCNAS @payusmoreucsc #strike 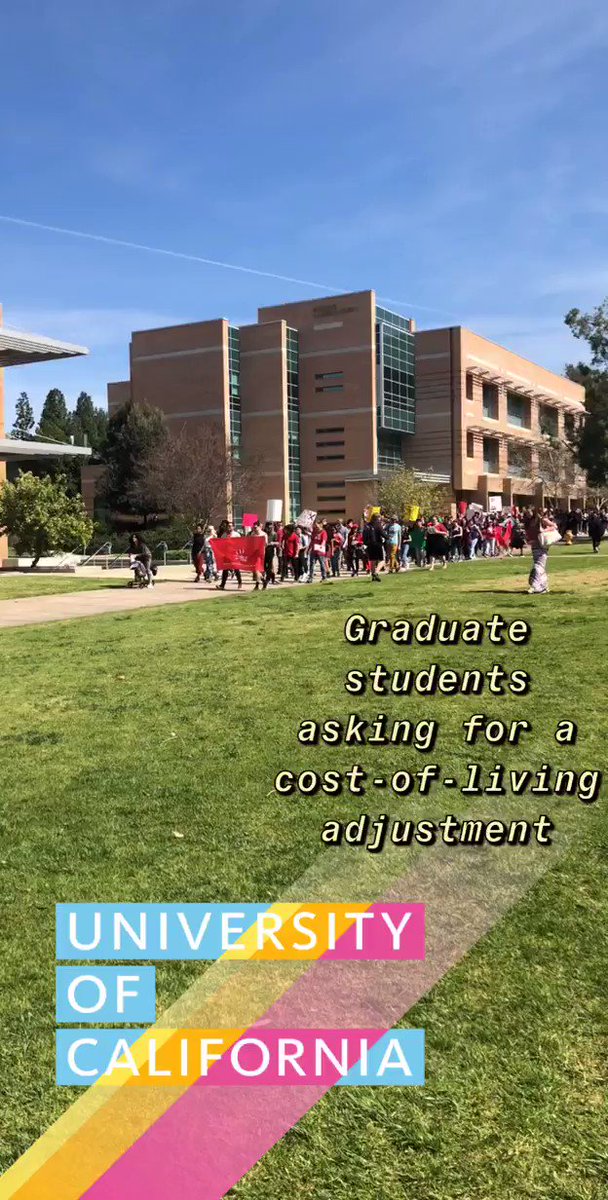 135 people are talking about this

Mass rally held organized in solidarity with arrested strikers and to demand COLA. Public push made to join larger strike wave. UCLA4COLA reports: “People have canceled sections/office hours/meetings. Others are holding their classes and meetings here. Let’s get UCSC strikers’ jobs back and get everyone a COLA!”

It’s a beautiful day out, but even more beautiful to see colleagues’ and students’ solidarity with ⁦@payusmoreucsc⁩ ⁦@ucla4cola⁩ #cola4all 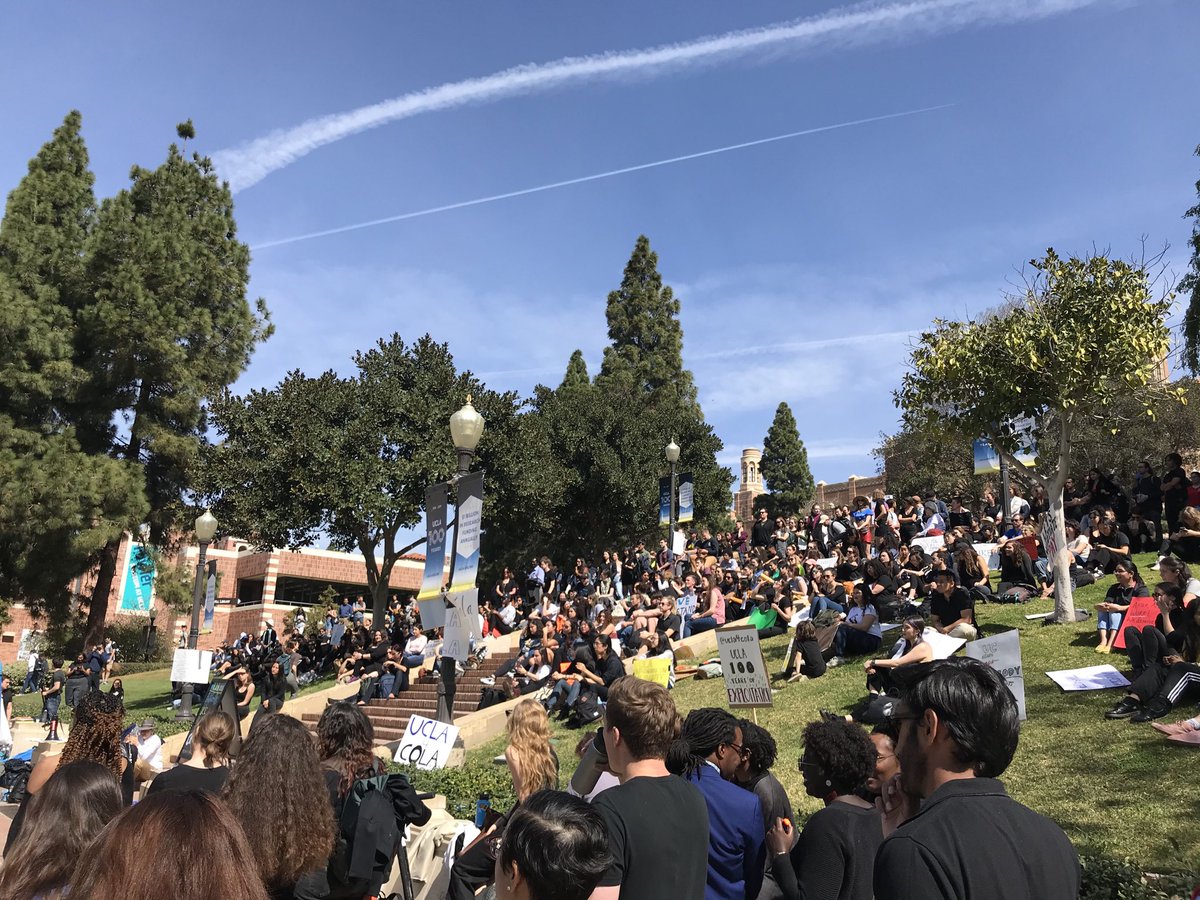 17 people are talking about this 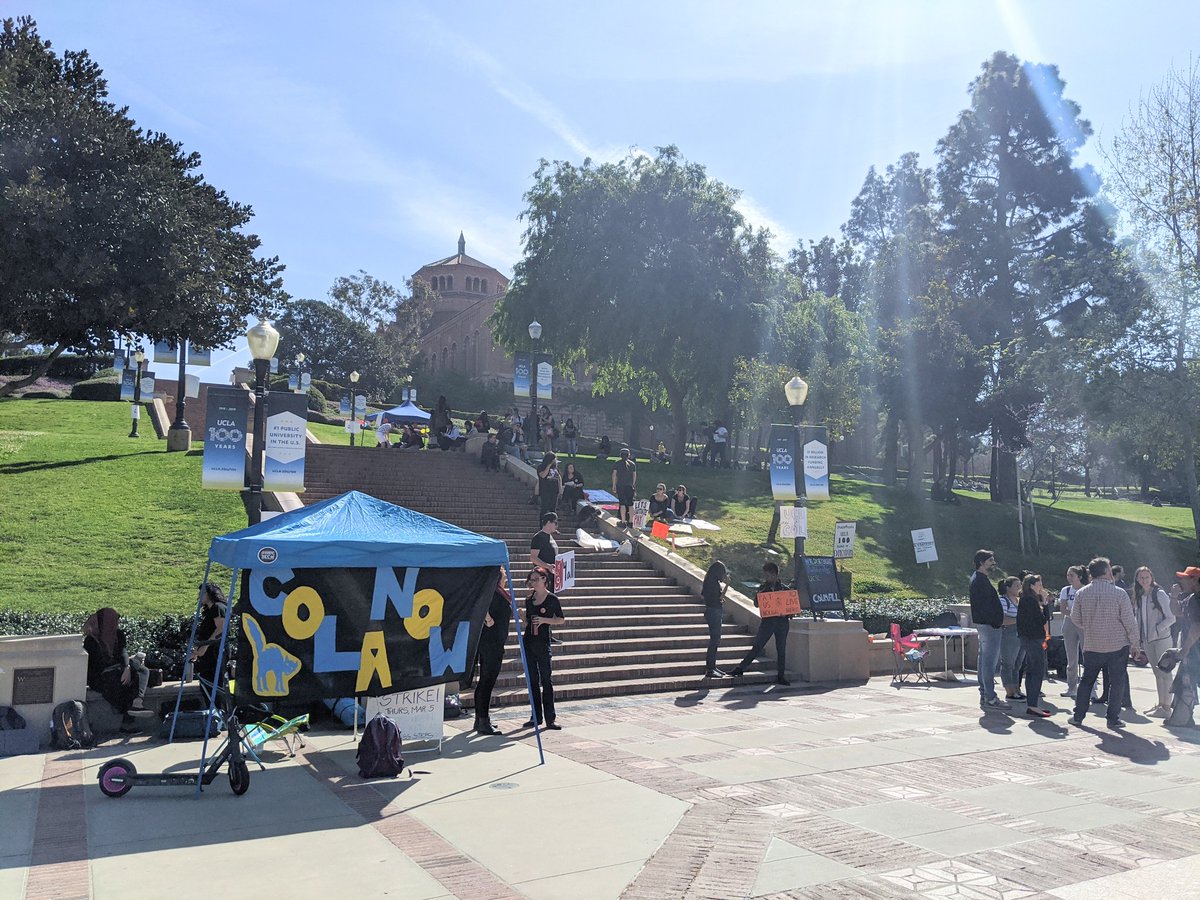 35 people are talking about this

#uclaCOLA solidarity across the UC’s. @payusmoreucsc @ucla4cola UCLA pay your workers. UC runs on graduate labour. #SpreadTheStrike You love you see it. The rent is too high. Mobbin strong today! 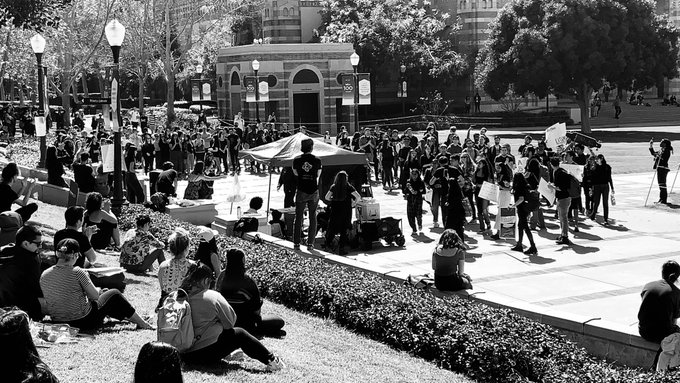 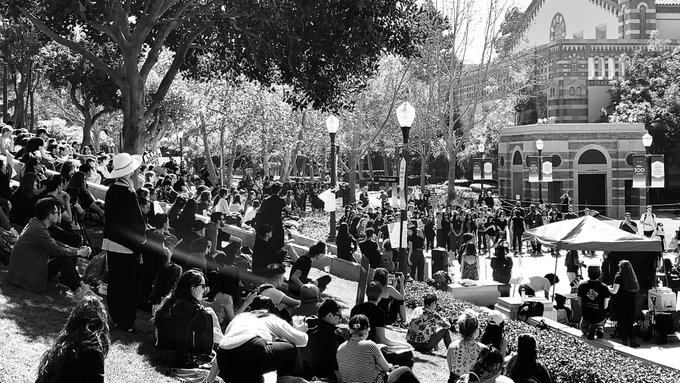 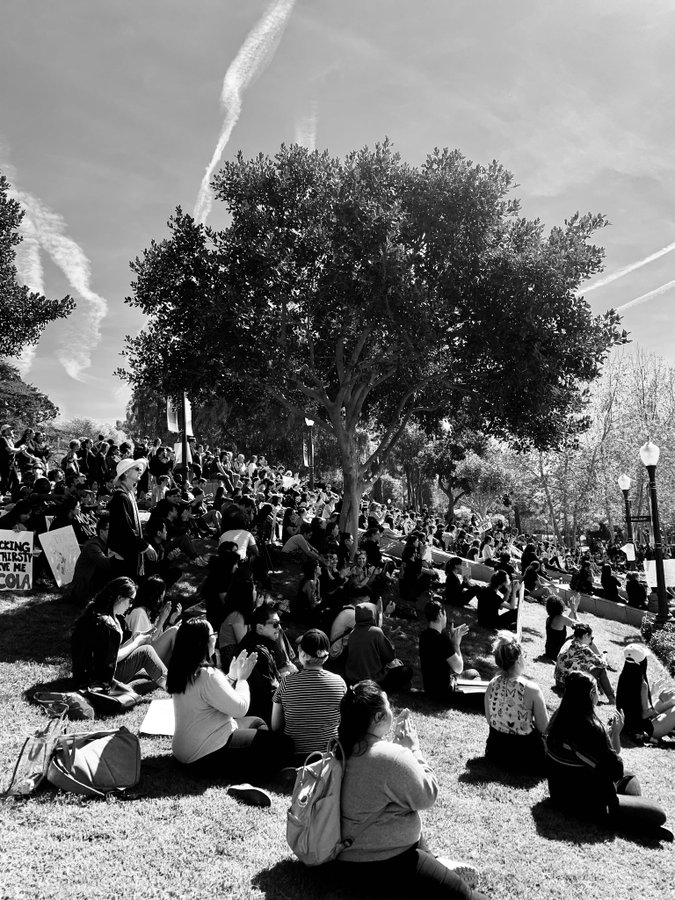 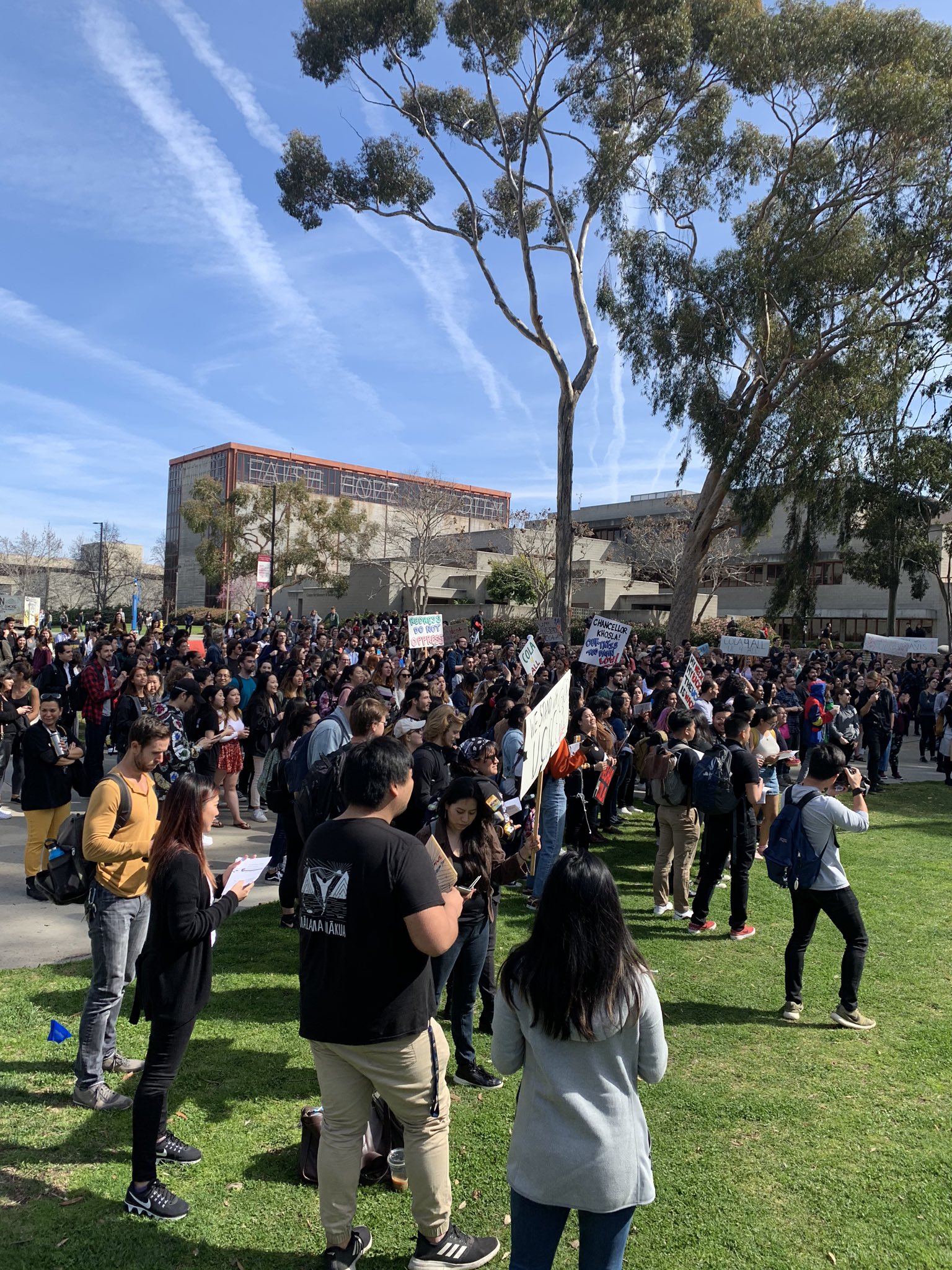 29 people are talking about this

163 people are talking about this

To President Napolitano, Chancellor Khosla, and Chancellor Larive: the students and workers of UCSD stand with Santa Cruz. We will not stop until we get the COLA we deserve. If you retaliate, we escalate.#SpreadtheStrike #StandWithSantaCruz #NoCOLANoGrades 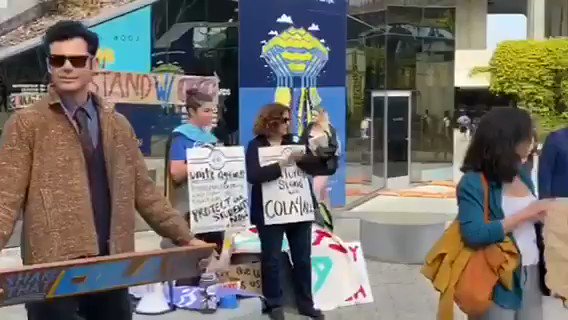 35 people are talking about this

163 people are talking about this