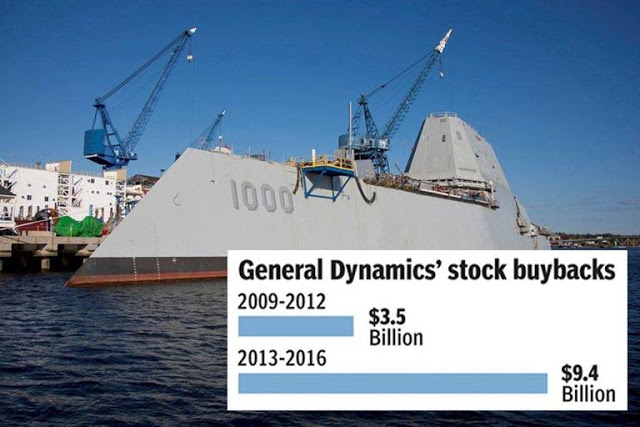 Above photo: From Space for Peace.

Bath, ME – General Dynamics (which own Bath Iron Works – BIW) is embarking on a statewide public relations campaign to ask the state legislature in Maine for a $60 million tax break over the next 20 years for their Navy shipbuilding operation in Bath.

They claim that in order to stay competitive they must have state financial support – what I’d call corporate welfare.

Already over many years General Dynamics has received more than $197 million in state and local tax breaks for BIW.  In 2013 BIW asked for another $6 million tax break from the City of Bath.  I worked with a small committee that organized a local campaign to oppose the tax cut and in the end a very reluctant city council voted to cut the request in half giving General Dynamics/BIW $3 million. That meant that citizen intervention saved the community $3 million that could be used for other local needs like salaries for firefighters, police, and for fixing crumbling infrastructure.

Now they dare to come around to an already financially strapped state of Maine with their corporate silver cup in hand asking for another $60 million.

On top of this I recently discovered an article in the Providence (Rhode Island) Journal entitled Defense firms spend big on lucrative stock buybacks.  The article reports (as shown in the photo above) General Dynamics spent $9.4 billion buying back its own stocks during 2013-2016.

In the article William Lazonick, an economist at UMASS-Lowell and an expert on stock buybacks says, “I think, as taxpayers, we’re being taken for fools.  At a minimum, I would have a rule saying, ‘You’re not getting any subsidies if you’re doing buybacks.  You’re showing us you don’t need the money.’ ”

The article also suggests that buybacks are bad for workers and average shareholders because the real beneficiaries are savvy traders who can time their sales and corporate brass with pay packages linked to stock performance and earnings per share.

In fact the top CEO at General Dynamics, Phebe Novakovic, last year made $21 million ($5 million of which was bonuses). It was Novakovic who accelerated General Dynamics stock repurchases since taking over the corporation in 2013 – so her bonuses are likely due to these fiscal shell games.

Novakovic netted $49 million in take-home pay in her first four years as General Dynamics CEO, with an annual average of 43% of her total compensation coming by way of stock-based pay.  So essentially this whole thing is a scam to bleed the taxpayers.

What is most disgusting is how they play one state against another saying that if they don’t get more tax breaks in Maine then they can’t maintain their operations because a similar shipyard in Mississippi gets tax breaks from their state.  So the poor in Maine are pitted against the poor in Mississippi and all the politicians – Republican and Democrat alike – get on their knees and give these thieving corporate pirates everything they want.

Of course some of the politicians get a kick-back too in campaign donations for having played the Wall Street game.  It’s sick.

General Dynamics, like most weapons corporations, get the vast majority of their operating funds from the federal treasury.  The taxpayers are paying the freight from the start.  But then the military industrial complex adds another twist – a strategy to extract even more profit from the taxpayers by going to the states and even to small cities like Bath demanding additional tax breaks.

We all should demand that our state legislators oppose this corporate welfare giveaway. Before General Dynamics gets anymore state taxpayer dollars they should be required to begin a transition process to build commuter rail systems, tidal power and offshore wind turbines to help us deal with our real problem – global warming.

We have the right, and the responsibility, to speak out and demand this nonsense stops now.  We are handing a collapsing nation, facing the ravages of global warming, to our children and grandchildren.  The least we can do is call upon on state legislators to go to Augusta and say no to General Dynamics. Enough is enough.

Let General Dynamics take back some of the extravagant pay increases and bonuses from their top executives before they come poor mouthing to our already financially barren state treasury.