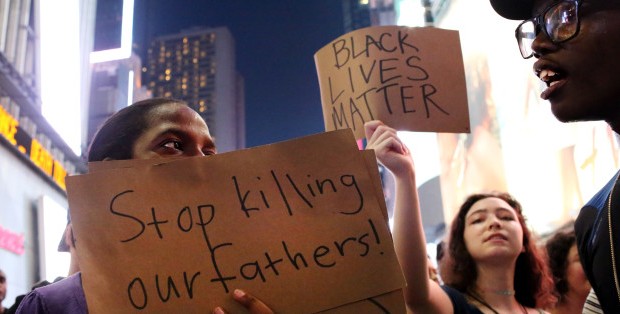 “Put those damn weapons down. I’m not going to tell you again, goddamn it. Get those goddamn weapons down.” That was the first command of one of Louisiana’s most revered figures, General Russell Honore, when he arrived in New Orleans in 2005 to direct the military recovery after Hurricane Katrina. The General’s directions have not been followed in Baton Rouge. Since the police killing of Alton Sterling, thousands of people in Baton Rouge have been non-violently protesting day and night all over the city. There has been no arson in Baton Rouge, no looting, no burning cars, no windows broken, and no people beaten. Police report that a rock or other material was thrown at them but there is no video of such action nor have there been any arrests for such actions.

Despite these non-violent protests, around 200 people have been arrested and the police have shown amilitarized and aggressive response.

When Ferguson police showed a militarized response to protestors, General Honore was againplainspoken. “Any time we have policemen pointing weapons at American citizens, they need to go through retraining.” Baton Rouge police, who have a documented history of brutality, clearly needretraining.

After Ferguson, the US Department of Justice (DOJ) issued a scathing report on the police response toprotests in Ferguson and they came up with numerous recommendations for law enforcement. Whilethe police have smartly pulled back from protests at the scene of the Sterling killing, many of the DOJ recommendations are being ignored in other protests around Baton Rouge.

“You would think Baton Rouge would watch Ferguson and learn a lesson. Apparently they didn’t,” said Peter B. Kraska, a professor at Eastern Kentucky University, to the Baton Rouge Morning Advocate. Kraska, who’s studied police militarization for the past 25 years, has worked with over 70 police departments on training and reforms.

“Over the past few days, law enforcement in Baton Rouge have escalated many interactions with the public civilian population, creating a more dangerous environment for everyone,” says May Nguyen, Secretary of the National Lawyers Guild (NLG)Louisiana Chapter. The Louisiana NLG, in cooperation with the Southern University Law Center chapter of the NLG, issued its conclusions from information gathered from more than 150 legal observers trained to protect First Amendment rights.

Thousands have protested nonviolently in Baton Rouge over the past week. Despite the non-violence,the police have arrested around 200 protestors.

Amnesty International, with observers on the ground in Baton Rouge, raised questions about thenumber of arrests. “In the wake of this intensely emotional week, it is understandable that peopleacross the country have been moved to take to the streets to peacefully exercise their right to be heard. Police have a duty to facilitate the right to peaceful protest while still protecting their own safety and that of the public. The sheer number of arrests last night raises serious questions about proportionate response to peaceful protests. Law enforcement officers cannot selectively decide which laws to enforce during demonstrations – be it against journalists, legal observers or protestors.”

A careful look at the arrests of the three journalists jailed indicates police were arresting many people without any crime being committed.

A conservative white journalist, from the news site Breitbart, who is self-professed Black Lives Matter critic and a strong supporter of law enforcement, Lee Stranahan was arrested under circumstances which call into question the actions of police. He reported “I did nothing to break the law. I was not obstructing traffic because with the road closed and police blocking the lane, there was no traffic. At no point did I hear the police give any order for me or anyone else to stay back. I was given no warning whatsoever; I was simply approached and forced to stop recording.” Stranahan was critical of the lack of leadership of the city and police as well. “…. Without any leadership, whoever was giving the orders to the police was issuing a series of confusing and conflicting rules of engagement for dealing with protesters, and the result was an increasingly chaotic situation with no open lines of communication between police and protesters.”

Another journalist, the assistant news director of a local television station, apparently put one foot on the highway to get a better angle for a video shoot and was arrested. Is that a crime suitable for arrest? An Indian American reporter for a New Orleans NPR affiliate was arrested while he was on the grass by the highway across from the police station. Trying to move away from an interaction with the police, he found himself surrounded by police who did not let people leave. He was charged with simple obstruction of a roadway despite having camera footage showing he was never in the road.

These officers are not disciplined or suspended by the government but defended. “These officers are on edge. They’re scared just like the public is. But we don’t condone that, and it has been addressed,” said the Baton Rouge Police Chief a couple of days before the police did the exact same thing again.

Wrongful Militarization of the Police in Baton Rouge

Military vehicles with LRADs (long range acoustic devices) atop them have been used to break up non-violent gatherings of people. Baton Rouge has purchased two $299,000 Bearcat armored vehicles andput LRADs on both, using one Sunday. Such use of an LRAD was specifically criticized by the DOJFerguson Report where they said, “At times, the deployment of the long range acoustic device (LRAD) was warranted as a high-volume public address system; however, it should have been deployed using a platform other than an armored vehicle. While the LRAD may be appropriate to disperse crowds, using it in conjunction with an armored vehicle escalates the hostility of the crowd and creates a negative public image.”

Pictures of militarized Baton Rouge police in military green gear, helmets, assault weapons and gas masks are all over the media. In fact they are now on the news across the world.

“Something is not right in that department in terms of amount of equipment and amount of training,”

General Honore told the Morning Advocate about the Baton Rouge police. After watching hours of video of the police response, Honore said “The gas masks themselves were pretty intimidating…My concern is, with those homes there and all the people in the houses, that would not have been a good place to do (show that weaponry), particularly when the protesters weren’t being violent,” he said after viewing hours of videos, imagery and other coverage of protests in Baton Rouge on Sunday.

The DOJ Ferguson report specifically warned police that militarized response was counterproductive and serves to escalate the situation. The use of military garb, weapons, materials and vehicles “inflamed tensions and created fear among demonstrators. Agencies possessing military-type equipment or weaponry should restrict its deployment to limited situations in which the use of the equipment or weapons is clearly justified by the events. The equipment and weapons should be kept out of sight and not be used routinely or in the absence of special circumstances. Policies and procedures should clearly state the limited situations for deployment.”

These are non-violent protestors. They are not an invading army.

While some protestors were actually blocking a street when they were arrested, dozens of the arrests for obstructing the highway were of people who were arrested on sidewalks, the grass or even inside a person’s house as the journalists’ accounts show. Pictures evidence heavily armed police taking down non-violent protestors not in the streets but on the grass. Other videos show dozens of police surging onto private property and arresting people wholesale. Legal observers documenting the arrests while standing on the sidewalk were also arrested. As The Daily Beast headline sums up: “Baton Rouge Cops Throw Protestors Into Street, Arrest Them for Being There.”

The Louisiana National Lawyers Guild has received reports of law enforcement covering up their name tags so people cannot know who they are have been received, conduct which is specifically criticized in the DOJ Ferguson report. “Officers wearing name plates while in uniform is a basic component of transparency and accountability…[covering them up] defeats an essential level of on-scene accountability that is fundamental to the perception of procedural justice and legitimacy.”

Likewise, once jailed, the mistreatment continues according to the National Lawyers Guild. People have been pepper sprayed in jail. People in jail were denied their medicines. People hurt during arrests who asked for medical help in jail were denied. People are being caged in places that could not possibly accommodate the numbers of people inside. People are not being allowed to make calls from jail to attorneys or families. Strip searches of women prisoners are occurring. It is past time, Baton Rouge, to listen to General Honore. “Put those damn weapons down.”