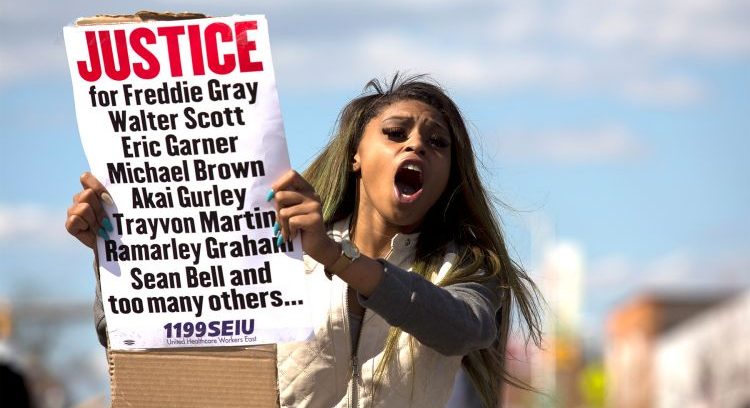 Baltimore, MD – The battle to keep Black, brown, and other marginalized people safe from police violence is like a fire that has burned for as long as this country has existed. Hot spots flare up when this country’s hatred for Black and Brown people becomes more apparent, making the heat more intense and the pain more unbearable. It feels like we are in one of those moments where the fire is burning especially strong right now.

This week, a jury found former officer Derek Chauvin guilty of the murder of George Floyd. In May of last year, Chauvin was caught on tape kneeling on Floyd’s neck as Floyd begged for his life. We reached out to State Sen. Jill Carter and Del. Gabriel Acevero, two Maryland lawmakers who were instrumental in getting comprehensive policing legislation passed here in Maryland just a few weeks ago. Carter has a decades-long history of fighting for police accountability. Acevero has pushed for police accountability legislation named after Anton Black, a 19-year-old who died in police custody on Maryland’s Eastern Shore in 2018.

“It was the right thing. The guilty verdict should not be a shock. There was irrefutable video evidence corroborated by a myriad of credible witnesses. The prosecution did its job and Chauvin will be held accountable as he should be,” Carter said. “Knowing 98.3% of excessive force cases do not result in conviction, I’m hopeful this conviction represents the new normal for officer accountability. In Maryland, we have just passed the strongest use of force law in the country. I expect through this, and other reform measures, we will finally begin to see a change in state-sanctioned police violence against Black people.”

“The verdict in the Derek Chauvin trial wasn’t justice, but it was accountability; which is all we can expect from a system not designed to recognize the inherent humanity of Black people,” Acevero said. “The U.S. criminal legal system declines to prosecute 97% of policing killings, only 1% result in a conviction. The verdict was bittersweet news. I believe it should’ve been life without parole.”

Acevero added that “this verdict is not a  substitute for the policy changes that impacted communities have been demanding for decades. Black people’s love language is policy, what we don’t need is pandering and performative wokeness.”

Battleground Baltimore also reached out to Harriet Smith, the director of education for the Baltimore Harm Reduction Coalition to rebuke the inaccurate, insensitive, and downright racist portrayal of George Floyd by Chauvin’s defense. Floyd was portrayed as someone who was possibly overdosing when he was attacked by police—something with absolutely no merit—and, more broadly, had his drug use mentioned in an attempt to dehumanize him and justify what we can all now, legally, call a murder.

“The criminal legal system—as a collection of individuals, policies, and informal practices—is an enthusiastic advocate for the racist war on drugs. Part of this criminalization machine relies on demonizing Black victims when the perpetrator is non-Black,” Smith said. “Fentanyl and methamphentimes and heroin and cannabis and you name it did not create the racist police— drugs did not cause Derek Chauvin to murder George Floyd nor did they cause other officers at the scene to hold back the bystanders. Officer Chauvin made that decision and the system that gave him the uninterrupted power to take the lives of Black people is the problem—drug use is the racist smoke screen.”

This week in Baltimore also marked the six-year anniversary of Freddie Gray’s death. In 2019, Battleground Baltimore’s Brandon Soderberg wrote an op-ed for The Real News detailing how little had been addressed since this city rose up and nearly enacted a revolution. Much of what he wrote remains true two years later:

“[The] Baltimore Uprising…was a youth-led movement organized by those most vulnerable and most affected—even four years later, is still hard for people in power to grasp,” Soderberg wrote. “Issues such as the city’s poverty, segregation, profoundly underfunded school system, inadequate public transportation (including the end of the Red Line, killed by Governor Larry Hogan), the lead paint crisis, and police corruption remain.”

One constant in Baltimore when it comes to exposing police corruption and protesting against police violence is the work of Tawanda Jones and the West Coalition, a group of friends and family who have been calling attention to the police killing of Jones’ brother Tyrone West, since 2013. In many ways, Jones’ dedicated work created the activist infrastructure that enabled the Baltimore Uprising. And in less than two hours of the guilty verdict being announced in the George Floyd case, Jones was at the front of a car caravan and march, calling attention to the George Floyds of Baltimore. She reminded those who joined her that the fight cannot be over because of one conviction.

“I’m not going to start singing Kumbaya or none of that. Like literally, I’m happy but at the end of the day there is no justice, it’s just us trying to hold the cops accountable. To me, it’s almost like you live in a rat house and you catch one rat on the trap and you’re not singing Kumbaya [because] that house is infected,” Jones said. “It’s a big system that is infected with corruption.”

Meanwhile, Baltimore City State’s Attorney Marilyn Mosby has lately been more intensely in the spotlight. Mosby’s name will forever be linked with Gray’s not only for the stirring speech she gave on the steps of the War Memorial Building on May 1 announcing that she was bringing charges against the officers, but also for issuing the commands to crack down on crime in Gilmor Homes, the community where Gray was when police first pursued him. As we wrote last week, Mosby recently announced the results of a year-long experiment where low-level crimes like some forms of drug possession, sex work, and tresspassing were no longer prosecuted. It is policy that ideally, in the long run, will reduce the number of interactions between police and citizens, but in the short term has confused councilmembers and even made some of those who support these policies skeptical due to a lack of clarity surrounding the policy.

Still, Mosby’s announcement is part of a growing acknowledgement that reducing police power is the only way to make serious change. At this year’s Board of Estimates Taxpayers’ Night, held on Apr. 21, citizens organized to make a very public rebuke of Mayor Brandon Scott’s proposal to add $28 million to the Baltimore Police Department’s already robust budget of more than $550 million, showing that they want even more change.

Comptroller Bill Henry noted that the city council would be able to review the budget in far greater detail than the Board of Estimates, and urged the mayor and city council president to take steps to make it easier for the public to weigh in on the budget process.

“As the preliminary budget stands right now, I do have serious concerns with our priorities and the direction our city is headed,” Henry said. But, he said, the budget that Scott submitted was simply more of the same.

“Plainly put, Baltimore needs a budget that gives less money to the police department and invests more money into our own people and their communities,” Henry said. “We need to find a way to invest in people’s lives. To make it so that they don’t have to commit crimes in order to survive. Better policing is only one part of public safety. Addressing poverty and other root causes of crime are a substantially larger part and our budget should reflect such thinking.”

What Henry said was reflected in what nearly 100 residents declared during the event. Thanks to a serious organizing effort by the Baltimore group Organizing Black, Baltimoreans across the entire city came prepared to tell the mayor, “Defund the police.”

In 2020, Baltimore City Council removed $22 million from the police department budget—a response to the then-nascent “defund the police” movement. Part of that modest budget cut was the result of Organizing Black, as well. They organized around the city and even closed a street in front of City Hall and painted “Defund the Police” in the street. A year later, the support for “defund” has clearly expanded and it would be hard for anyone in Baltimore to dismiss the movement as “niche” or only an activist concern when residents from some of the city’s most divested neighborhoods and most invested neighborhoods all challenged the police budget.

Some of the Taxpayers’ Night attendees pointed to the ineffectiveness of police. One woman said she had been sexually assaulted several times and each time, when she tried to get help she got none. Another person testifying said that they noted that the kids they work with become “tense and distant” when police are around. “They are suddenly in survival mode,” they said. Others pointed to the moral imperative of taking money away from an organization that harms the community when so many other resources in the city are underfunded, or not funded at all.

“I want to see a moral budget,” one person said.