I never considered myself a politically active type. In fact, I abhorred politics for three decades. But about 25 years ago, I realized that I couldn’t fight my personal health insurance issues without dealing with the many other human rights issues I’d heard people debate on C-Span not realizing how they were affecting my life.

So I got involved with my local Democratic party here in Detroit, then in fighting for school reform. After that, I began speaking out as a volunteer advocate for people who face water shut-offs because they couldn’t afford to pay their bills. This issue is finally making national headlines, but the city previously shut off Detroiters water 10 years ago, when large numbers of Detroiters began to struggle with the city’s high water rates. The city council passed an affordability plan that adjusted water rates based on a percentage of income.

Unfortunately, that plan got cut before it could have much effect. Instead, water problems have only gotten worse in a city where at least 60 percent of the population live on a fixed income, low income, or no income. I’ve gone into neighborhood after neighborhood and found myself saying, “Wow, what happened here? The last time I was here, this was an intact neighborhood.” In both the east side neighborhood where my mom lives and the west side where I live, you’ll see blocks and blocks of vacated homes. Meanwhile, our water rates continue to increase to pay the bond debt the Department of Water and Sewerage has been carrying.

I do a lot of door-to-door canvassing to address water shut-offs both on my own and as part of a group called We the People of Detroit, an organization that informs and mobilizes residents to improve their quality of life. We visit people at home, try to assess what’s wrong, and then find resources to help get emergency water deliveries or have service restored.

When I talk about my work, I hear a lot about, “deadbeats” and people who “won’t pay their water bills.” I’m sure there are some people like that out there. But the ones I’m seeing aren’t. The average age of the people I visit whose water has been shut off is over 70. Their incomes are around $500 per month, which makes it hard to pay water bills that can come in at 20 percent or more of their budgets.

It’s not just an issue of whether residents can pay. Many of the people I’ve talked to are renters whose names aren’t on their water bills. Instead, the landlords get the bills. When renters fall behind on payments, they need the property owner to contact the water department before they can make arrangements to pay in installments to get their water turned back on. But many of these landlords live out of state—even out of the country. They’re not willing to go to the water department and prove that they own the property. That forces a lot of renters to live without water or to give up their housing and move into a shelter.

I encountered a horrifying example of this kind of situation in the Greenfield Road area between West Chicago and Plymouth on the west side. One disabled senior lived in a home without water with her mentally disabled 40-year-old daughter. Every morning, the mother had to put her daughter in the car and drive to McDonald’s so her daughter could have a bowel movement. This was one of those cases where the senior had kept up their payments to the landlord, but the landlord hadn’t paid the water bill. When the family moved out, they had to give up their security deposit.

A few blocks from where that family lived, I met a single mom with seven children who had been living without water for three months. She had to hide the fact that she had no water from the authorities in order to keep the family together, because living without water is a serious health risk. If you can’t wash your hands, you can’t prevent disease. The family has since moved out of the home and found a place with water last I checked. 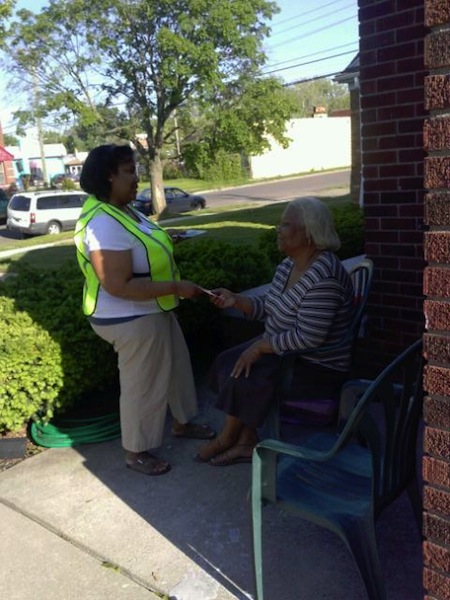 Last October, I was part of a group from We the People of Detroit who took United Nations human rights investigators on a tour of the city to show them the effect of the shut-offs. I instructed the driver to take us to the same area off Greenfield and we encountered a mother with three teenage girls who had been without water for five months. Being a teenage girl is hard enough; I can only imagine how awful it would be to have your menstrual cycle and not have access to water, and not to be able to take regular showers. Their mother had bought a house at auction without realizing she was responsible for the last owner’s delinquent water bill. So while trying to fix up the house for her family, she also had to try to save money to pay on the astronomical water and sewage bill someone else had racked up. We the People pitched in by delivering water for three weeks and so did a neighbor across the street from the family. That woman would carry water across the street to the family of four and sometimes allow them to shower in her home.

I’m continually amazed by the resiliency of the families I visit. On the north end of Detroit, I’ve seen water hoses go from one house to the next as people try to make sure their neighbors have water. They’re making a way out of no way.

But, still, they need substantive help. We the People and I can only make so many emergency water deliveries on our own. That’s why we need public policy: the real implementation of a water affordability plan, where water rates are determined and assessed as a percentage of a water customer’s income. Instead, the Detroit Water and Sewerage Board continues to increase rates and recently announced another round of mass shut-offs is pending.

Shut-offs don’t get people to pay their bills. They just create a devastating cycle, one that’s been going on for 10 years too long already.