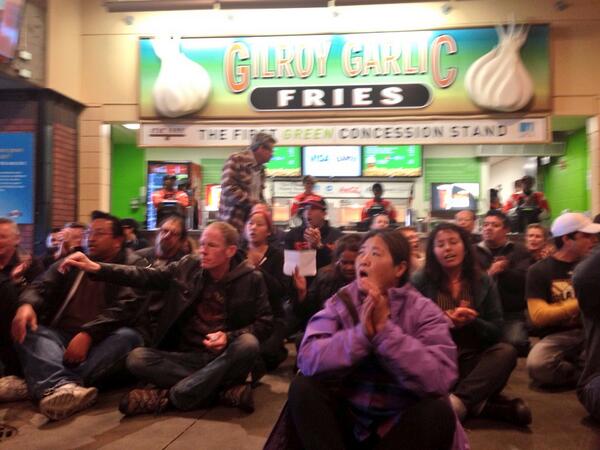 Twelve AT&T Park concession workers were arrested, and another 50 were forcibly removed by police, in an act of civil disobedience on June 18, 2013. They sat down in front of one of the park’s most profitable concessions, Gilroy Garlic Fries, and prevented anyone from ordering food, while hundreds of supporters picketed outside the stadium.

Concessions workers voted on May 13 to authorize a strike and a boycott of food and beverage concessions at the park. “We sent a clear message today to Centerplate and the Giants – that we have the power we need to win a fair contract,” said Billie Feliciano, a concessions worker at Giants games since 1978.

Negotiations are at a standstill between Centerplate – the Giants’ subcontracted concessionaire – and the concession workers’ union, UNITE HERE Local 2. Workers are seeking job security through a successorship clause, along with fair wage increases and improved health care. Centerplate is proposing to severely limit access to healthcare, and to maintain a wage freeze for the last three years with a 25 cent raise for 2013 as well as another 25 cent raise for 2014.

“Job security is really important to me and my family. I travel two hours to come and serve Giants fans,” said worker Anthony Wendlberger. Without successorship language, if the concession contract changes hands all the workers employed at the stands could lose their jobs.

David Bacon is a writer and photographer. His new book, “Illegal People – How Globalization Creates Migration and Criminalizes Immigrants,” was just published by Beacon Press. His photographs and stories can be found at http://dbacon.igc.org.