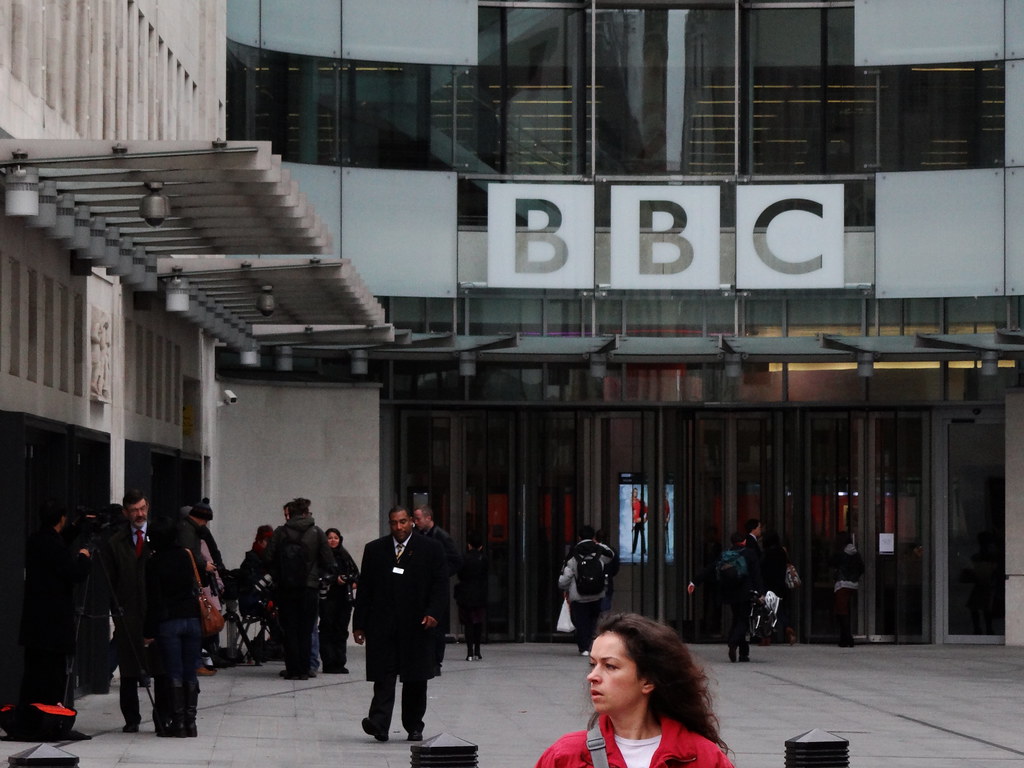 BBC Reports On The Suspicious Destruction Of A Theater In The Ukrainian City Of Mariupol Were Co-Authored By A Ukrainian PR Agent Tied To A Firm At The Forefront Of Her Country’s Information Warfare Efforts.

Before serving as a fixer and reporter for the BBC in Ukraine, Orysia Khimiak handled PR for a start-up called Reface which created what the Washington Post called a “reality distorting app” now serving as “a kind of Ukrainian war-messaging tool.”

According to her Linkedin profile, Khimiak was the director of PR for Reface until October 2021. While working that job, Khimiak says she built “long-term relationships with editors and media representatives.” She has also overseen a PR course for the Kiev-based Projector Institute, whose website currently greets visitors with the slogan, “Glory to Ukraine. We Will Win.”

With her wealth of media contacts, Khimiak now plays an instrumental role in shaping BBC’s coverage of the Russian-Ukrainian war. She has even shared a byline with the network’s Lviv-based correspondent, Hugo Bachega, co-authoring reports focused on demonstrating Russian culpability for the bombing of the Mariupol dramatic theater.

Khimiak broadcasts her political bias in her Twitter bio, stating that she is “a fixer in Lviv for journalists for reporters who show honest image of Russian war against Ukraine. Ukraine will resist.” 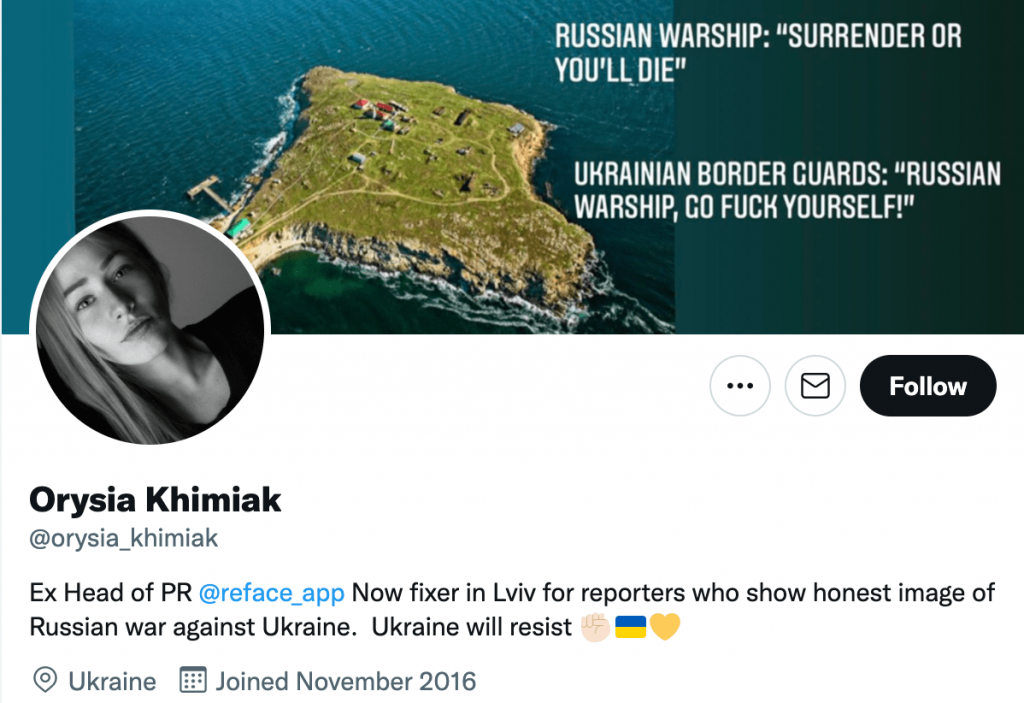 Khimiak’s Twitter background references the “Snake Island” standoff which was widely reported by mainstream Western media outlets and heralded as a testament to Ukrainian military bravery. According to Ukrainian President Volodymyr Zelensky, 13 Ukrainian border guards “died heroically” defending an island base against they Russian Navy. “Russian warship, go fuck yourself!” were the soldiers’ final words, or so the story went.

The Ukrainian guards ultimately turned up alive as Russian captives. The entire story of courage under fire, including the Snake Island defenders’ famous last words, was a myth – one of so many stories fabricated or heavily distorted by pro-Ukraine elements that they have become impossible to count.

On the Twitter page of the PR agent-turned-BBC correspondent Khimiak, the phony Snake Island stand-off is still treated as a real historical event. On her Twitter timeline, meanwhile, Khimiak takes credit for the BBC’s reports on the destruction of the Mariupol dramatic theater. She and her co-author, Bachega, have yet to respond to a request for comment from The Grayzone.

The incident at the Mariupol theater represents one of the most suspicious events of the war, with both the BBC and CNN citing a claim by one local Ukrainian official claiming hundreds were killed inside the building, but producing no evidence to verify it.

Russian forces have caused widespread destruction across Mariupol, where they have been engaged in intense street-by-street fighting with Ukrainian forces led by the neo-Nazi Azov Battalion.

However, as this reporter detailed, the Mariupol theater was controlled by retreating Azov militants who were desperately appealing for military intervention by NATO. Several evacuees have claimed Azov detonated the theater to create the impression of a Russian attack that might draw the West into the war. Meanwhile, video of the alleged Russian attack on the theater has yet to materialize, and images of the supposed rescue of survivors or mass deaths at the scene remain unavailable.

On March 25, nine days after the incident, CNN broadcast what it said was the first footage of the attack on the theater. The footage (seen below) was only 20 seconds long and showed a small group of civilians slowly ambling down a staircase to the ground floor of a building. A narrator can be heard behind the camera repeatedly referring to an airstrike but claiming that those on the first floor had survived.

The video appeared to have been shot some time after the attack, as none of the smoldering present in video taken in the aftermath of the explosion could be seen. That video, seen below and taken on March 16, shows a smoking building with no rescuers or any people on site.

CNN has also claimed that 300 civilians were killed inside the theater. The BBC also echoed the official Ukrainian claim of 300 dead, but acknowledged, “Communication with Mariupol remains difficult so it is hard to independently verify information.”

Both networks relied on just a single source for the dramatic allegation: Petr Andryushchenko, an advisor to the mayor of Mariupol who recently saluted the neo-Nazi Azov Battalion as courageous “defenders” of his city.

The official’s evidence? According to the BBC, “officials were able to check the death toll because they had a record of who was in the theatre before the missile strike and had spoken to survivors.”

Western media did not see fit to mention that Andryushchenko was likely far from Mariupol, as he recently acknowledged “that we are forced to move in order to preserve our intelligence network.” His boss, Mayor Vadim Boychenko, reportedly fled the city several days ago.

Curiously, partisan Ukrainian reporters claimed a day after the attack that everyone sheltering inside the theater’s basement had miraculously survived.

Also on March 17, Ukrainian government ombudswoman Ludmyla Denisova stated on Telegram: “The (theatre) building withstood the impact of a high-powered air bomb and protected the lives of people hiding in the bomb shelter.”

Four days before the incident, Mariupol locals informed Russian media that the theater was to be the site of a false flag operation aimed at generating Western outrage and triggering NATO intervention.

One day after the incident took place, civilians evacuated from Mariupol testified to Donbas-based media that Azov fighters blew the theater up as they retreated. They went on to detail how Azov used them as human shields throughout the fighting, even sniping at them as they tried to escape.

Among the most curious aspects of the incident of the theater was the disappearance of all vehicles from the parking lot in front of the structure hours before the explosion occurred. It seems that though they had been removed in order to avoid being damaged by the expected blast. 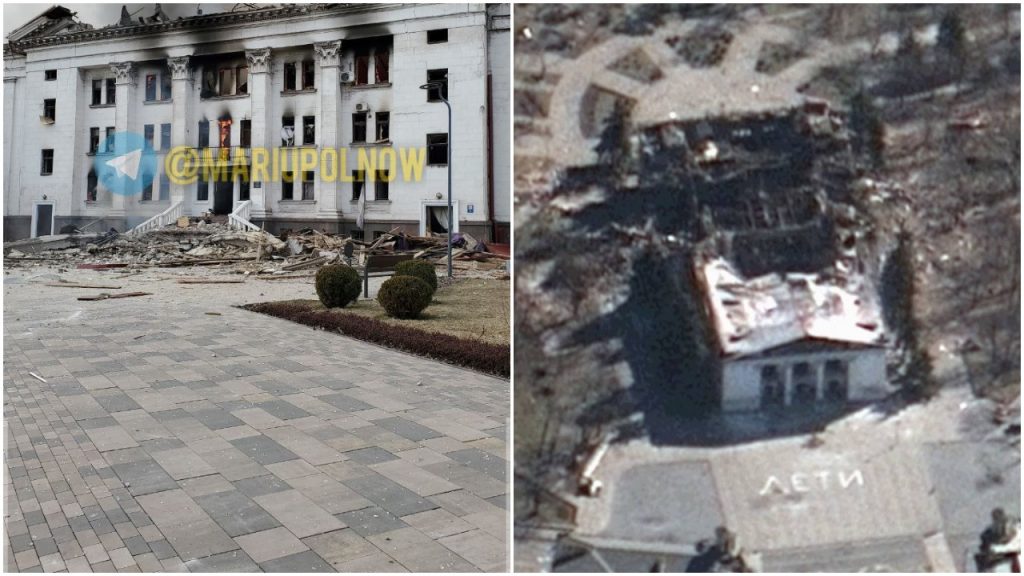 Ignoring the accounts of evacuees from Mariupol who said Azov militants had destroyed the theater before retreating, the BBC’s correspondent, Bechaga, and his fixer, Khimiak, initially turned to official Ukrainian sources and a resident who was not present at the theater on the day of the supposed attack.

On March 17, the day after the theater incident, Bechaga and Khimiak reported that “according to Ukrainian authorities, [the theater] was bombed by Russia…” Their only local source said she left the theater one day before the building was destroyed – when most, if not all those on the grounds appeared to leave. “We knew we had to run away because something terrible would happen soon,” she told the BBC.

The BBC reporter and PR agent-turned-fixer co-authored a March 22 follow-up article quoting two local witnesses who said they were near the theater when a massive blast occurred. Both delivered  cinematic accounts which open source intelligence analyst Michael Kobs called into question.

The male witness said he “saw plenty of people bleeding.” However, in a time when nearly every person carries a smartphone, video of the harrowing scene he described has yet to surface.

Finally, the BBC turned to McKenzie Intelligence, a private contractor founded by a former UK military intelligence officer, to hypothesize that a Russian 500-pound laser guided missile was used to destroy the theater. But as the open source analyst Kobs pointed out, “the center of destruction sits right in the middle of the stage, so two dumb bombs can’t possibly be to blame.”

While the BBC seems intent on legitimizing the official Ukrainian narrative of the theater incident, other mainstream outlets have quietly moved on. “Even now, the fates of most of those people [inside the theater] remain unknown,” the NY Times noted in passing on March 21.

The BBC’s choice of an overtly nationalist Ukrainian public relations agent to guide its coverage of the war highlights the network’s absolute alignment with NATO’s objectives.

Before her gig with the British state broadcaster, Khimiak handled public relations for a Kiev-based start-up that created an AI app enabling users to superimpose their faces on the bodies of famous people. Called Reface, the app has become “a kind of Ukrainian-war messaging tool” disseminating anti-Russian push notifications to millions of users, the Washington Post reported.

According to the Post, “reality-distorting apps like Reface are a way for users to absorb messages they might otherwise tune out. People have their guards up with political news on those platforms… But they lower them for an immersive experience like face-swapping.”

Reface now says it is engaged in a “viral battle against #russianterrorists.”

As part of its efforts against Russia, Reface said it has blocked Russian users from accessing the app. Further, “everyone who opens the app sees a message to support Ukraine” along with a banner “with information about the real losses of the Russian army.” A watermark with the Ukrainian flag and the hashtag #StandWithUkraine is layered over each video that appears on the app.

Reface says its employees have joined “the territorial defense units and volunteers, and several teams have also joined the cyber troops to fight Russian propaganda.”

For her part, the former Reface PR director Khimiak-turned-BBC correspondent/fixer has not been reticent about Ukraine’s Russian adversaries. “I just can’t accept opinion that not all Russians are bad. All I feel is pain and hate, because their silence is a consequence of this war,” she declared on Twitter in reaction to a video depicting rescuers trying to save a young girl from rubble. 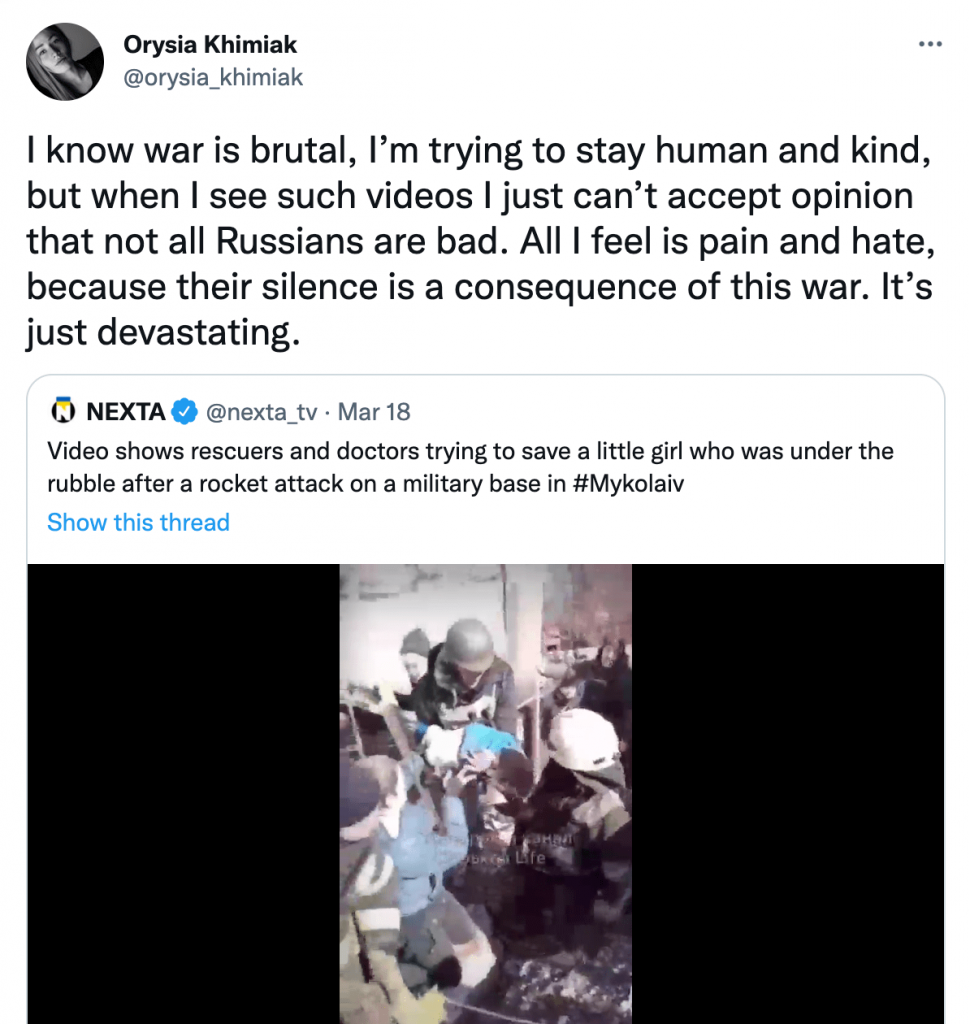 Though BBC proclaims in its own statement of values, “Trust is the foundation of the BBC. We’re independent, impartial and honest,” its hiring of a Ukrainian public relations specialist who has confessed to hatred of all Russians to arrange its coverage of the war in the country is hardly surprising.

As seen below, UK FCDO documents revealed that BBC Media Action proposed working through a private British contractor called Aktis to cultivate and grow pro-NATO media in conflict areas like the Donbas region of eastern Ukraine, now the focal point of fighting between pro-Russian forces and the Ukrainian military.

The BBC’s secret information warfare initiative had turned the network into an arm of British intelligence, operating as an actor in a foreign conflict which its broadcast media arm was simultaneously claiming to cover in an objective manner.

Now, the BBC has shed any pretense of objectivity by hiring an overtly nationalist Ukrainian public relations operative to shape its coverage of one of the most heavily disputed incidents in a war filled with cynical deceptions.