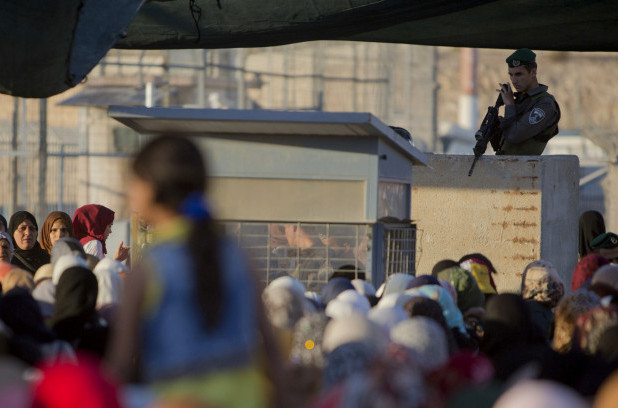 Above Photo: An Israeli border police officer stands as Palestinian women wait to cross the Qalandia checkpoint between the West Bank city of Ramallah and Jerusalem, June 17, 2015. (AP Photo/Majdi Mohammed)

‘People of conscience today should boycott HP companies for providing imaging and technology for Israeli apartheid,’ declared an activist who helped target South Africa’s apartheid policies in the 1970s.

AUSTIN, Texas — Though best known for their computers and computer peripherals like printers, companies under the Hewlett-Packard umbrella are engaged in another profitable, and far more nefarious business: enabling apartheid Israel to track the movement of occupied Palestinians.

Activists from the Boycott, Divestment and Sanctions (BDS) movement are calling for a week of action against HP beginning on Black Friday, the high-volume shopping day that occurs after Thanksgiving. Organized by the HP Boycott Campaign and the Palestinian BDS National Committee, a coalition of Palestinian civil society groups, 99 actions were scheduled in 18 countries around the world, including the United States, as of Monday afternoon.

The Israeli military operates checkpoints throughout the occupied West Bank. In order to pass through them, Palestinians must submit to facial and and hand recognition scanners. This biometric identification system, called the “Basel System,” is maintained by HP Enterprise Services, a company previously known as EDS Israel.

“The biometric data of nearly every Palestinian over the age of 16 is held by the Israeli authorities as part of Israel’s system of control and repression,” the Palestine Solidarity Campaign noted in an Aug. 13, 2014 post.

The checkpoints and the Basel System allow Israel to drastically restrict the movement of Palestinians, making it impossible for many to find work. Checkpoints are frequently the site of violence against innocent Palestinians.

In addition to its contributions to the Basel System, HP also sells products and technology to the Israeli armyand navy, and operates in illegal Israeli settlements in Palestinian territories. Despite international condemnation, these illegal settlements have continued to expand, growing at a record pace in 2016.

A Nov. 21 press release from the U.S. Campaign for Palestinian Rights elaborated on HP’s role in the oppression of Palestinians:

“HP companies supply Israel with the Biometric ID Card System used to restrict Palestinians’ freedom of movement; provide servers for the Israel Prison Service where Palestinian children and political prisoners are routinely held without charge and torture is widespread; manage the communications centers, information security, and user support of the Israeli Navy as it collectively punishes the civilian population of Gaza through blockade; and provide various services to illegal settlements in the West Bank.”

Suggested actions for the week include putting pressure on stores to pull HP products from their shelves, organizing protests and direct actions outside HP offices, and holding teach-ins about HP and the BDS movement.

Supporters can also sign a pledge to boycott HP organized by the Palestine BDS National Committee and the U.S. Campaign for Palestinian Rights.

“Just as Polaroid was a key boycott target during the Apartheid era for providing imaging for South Africa’s notorious pass system, people of conscience today should boycott HP companies for providing imaging and technology for Israeli apartheid,” Caroline Hunter is quoted as saying in the press release from the U.S. Campaign for Palestinian Rights.

In early the 1970s, Hunter and other Polaroid employees launched a campaign against the company’s involvement in apartheid South Africa after discovering that it was providing the camera systems used to create identification cards for the country’s black residents. By 1977, Polaroid was forced to withdraw from South Africa.