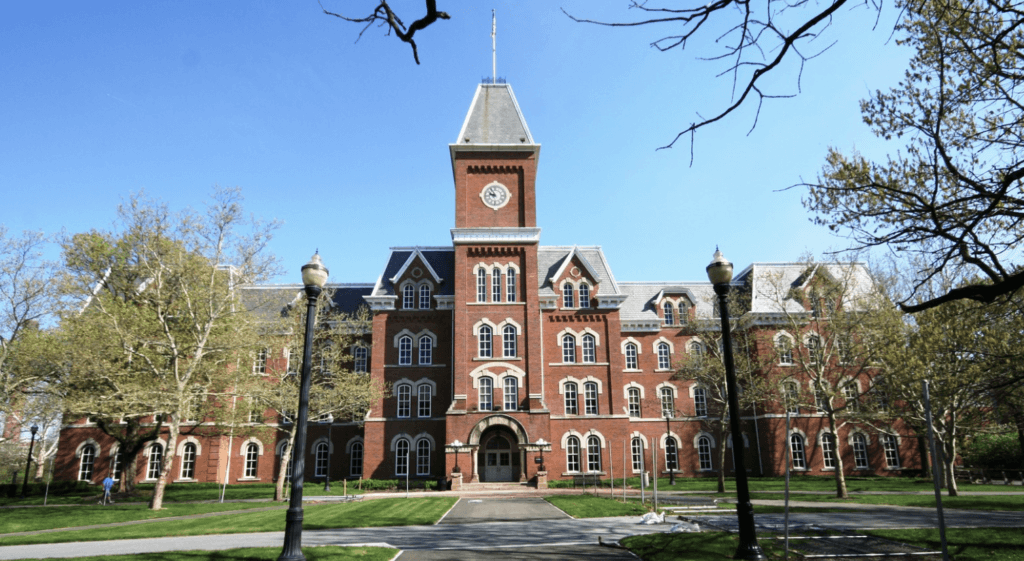 BDS Fights Heat Up Across Campuses

BDS news from Ohio State and Princeton, as well as ongoing fallout from the Middle East Studies Association’s endorsement of boycott.

On April 7 the student government at Ohio State University passed a resolution calling on the school to divest from companies connected to human rights abuses in Palestine. The two companies targeted are Hewlett Packard Enterprise, who provides technology to the Israeli military, and Caterpillar Inc., whose bulldozers are used to demolish Palestinian homes. “The passage of this resolution is merely one milestone on the long journey to the Palestinian people’s eventual triumph,” said the school’s SJP chapter in a statement. “We urge our supporters to remain vigilant and empowered as we take our next steps for accountability.”

Ohio State has an unwavering commitment to free speech and encourages our students, faculty and staff to engage in discussion and debate and respects the right of the USG General Assembly to engage in free expression on issues it believes are pertinent to campus affairs. Based on the USG bylaws, because the outgoing USG president did not sign this resolution, it represents the opinion of the outgoing USG General Assembly and not of the entire USG as an organization. This distinction means that this resolution does not meet the threshold described in the university’s investment policy, and the university will not move forward with any action on this resolution.

“Whether the president signed it or not, whether it made it through the trustees or not, at the end, the end game was the same, because it was never going to be implemented,” alternate student senator Ethan Wolf told the Cleveland Jewish News. “It’s illegal in the state of Ohio to pass the divestment bill from the State of Israel specifically.”

Wolf is referring to Ohio’s 2016 anti-BDS bill, which was signed into law by former Governor John Kasich. When Kasich ran for the GOP presidential nomination he vowed to fight BDS on campuses if elected. “I will use the full force of the White House to fight this scourge,” he told the crowd at AIPAC’s policy conference.

It’s unclear what happened at Princeton, where a similar voted recently took place. The student government voted on whether to stop Caterpillar construction machinery from being used on campus over the “role its played in the mass demolition of Palestinian homes, the murder of Palestinians and other innocent people, and the promotion of the prison-industrial complex.” Students tried to pass a similar measure in 2015, but it was unsuccessful.

The school’s newspaper, The Daily Princetonian, is reporting that the measure met the threshold to be passed based on preliminary election results. However, the Jewish Insider is reporting that it looks like the vote failed. The group Princeton for Palestine apparently made an Instagram post celebrating a victory, but then deleted it. Undergraduate Student Government President Mayu Takeuchi hasn’t confirmed any result and says the official totals will be released “no earlier than this Friday, April 15 at noon,” although nothing has been released at the time of this publication.

As we’ve reported at the site, school’s have already begun cutting off ties with MESA over the vote. “Brandeis University condemns MESA’s boycott of institutions of higher education in Israel,” said the school in a recent statement. “The resolution attacks the fundamental principles of academic freedom and association to which MESA specifically refers in its mission statement, and to which Brandeis is committed. As a matter of principle, Brandeis University opposes academic boycotts of universities in any country. In light of this vote and the boycott, Brandeis dissociates from MESA and reaffirms our support for academic freedom.”

Author and human rights attorney Noura Erakat, who originally introduced the resolution, has a piece about the vote in Middle East Eye. “The members of this association, now more than half a century old, have harnessed years of rigorous scholarship and intellectual output to conclude that solidarity with Palestinians must today deepen and expand,” she writes. “More active solidarity is necessary in the face of a farcical US-brokered peace process that has enabled Israel to entrench its apartheid regime, and is consistent with the association’s ethical commitments, as the BDS call has come from Palestinians themselves.”