This article was produced in collaboration with the Food & Environment Reporting Network, an independent nonprofit news organization.

While soybean farmers watched the drift-prone weed killer dicamba ravage millions of acres of crops over the last two years, Arkansas beekeeper Richard Coy noticed a parallel disaster unfolding among the weeds near those fields.

When Coy spotted the withering weeds, he realized why hives that produced 100 pounds of honey three summers ago now were managing barely half that: Dicamba probably had destroyed his bees’ food.

In October, the U.S. Environmental Protection Agency extended its approval of the weed killer for use on genetically modified soybeans and cotton, mostly in the South and Midwest, for two more years. At the time, the EPA said: “We expect there will be no adverse impacts to bees or other pollinators.”

But scientists warned the EPA years ago that dicamba would drift off fields and kill weeds that are vital to honeybees. The consequences of the EPA’s decisions now are rippling through the food system.

Dicamba already has destroyed millions of dollars’ worth of non-genetically modified soybeans and specialty crops, such as tomatoes and wine grapes. And now it appears to be a major factor in large financial losses for beekeepers. Hive losses don’t affect just the nation’s honey supply: Honeybees pollinate more than $15 billion worth of fruits, nuts and vegetables a year, largely in California, according to the U.S. Department of Agriculture.

“It seems like everybody’s been affected,” said Bret Adee, whose family runs the nation’s largest beekeeping outfit, in South Dakota. He thinks 2018 might be “the smallest crop in the history of the United States for honey production.” 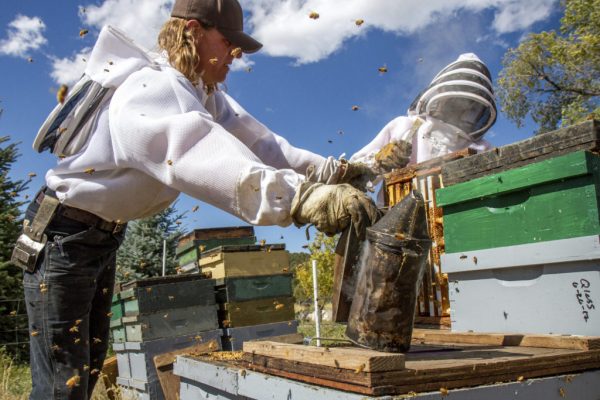 Derrick Maness and Josh McCue work together on Thursday, Oct. 5, 2017 in Carbondale, Colo. to drive out the bees and transfer the honey supers to the truck which will taken back to the farm in Silt, Colo. to be extracted, bottled and sold. Maness and McCue have spent the last several years researching and working with Colorado State University to fight the varroa destructor mite, which has contributed greatly to the rapid decline of honey bee populations. “Mites are on everything,” Maness said. “They already knew how to combat mites, we just didn’t just didn’t know how to fight this mite,” he added. “How do you kill a bug on bug?” (Chelsea Self/ Glenwood Springs Post Independent via AP)

Beekeepers long have struggled to protect their hives from parasites, viruses, insecticides and other colony-destroying threats. All these factors, as well as climate change, have been linked to colony collapse disorder, which emerged more than a decade ago and destroyed 30 to 90 percent of some beekeepers’ hives. Now with dicamba, beekeepers must contend with a scourge that can wipe out the food and habitat bees need to thrive.

Nine years ago, agricultural ecologist David Mortensen had told EPA officials that allowing dicamba use on genetically modified crops would pose serious risks to wild plants and the pollinators they sustain. In 2011, the EPA’s own scientists cited Mortensen’s work to conclude that increased use of dicamba could affect pollinators.

But the agency registered dicamba in 2016 despite the warnings, Reveal from The Center for Investigative Reporting and the Food & Environment Reporting Network reported in November. Last fall, the agency extended approval through 2020.

No one factor can explain what’s driving hive losses. But the evidence is “pretty damning” that dicamba affects both pollinator forage and the bees themselves, said Mortensen, chairman of University of New Hampshire’s Department of Agriculture, Nutrition and Food Systems.

Dicamba damaged nearly 5 million acres of soybeans in the Midwest over the past two years, and “you know that all the field edges anywhere near the damaged crops were hammered by the herbicide,” Mortensen said, “which would mean the broadleaf plants the bees go to were hammered.” Dicamba has little effect on grasses, including corn and wheat, but even tiny doses can injure soybeans, wildflowers and other broadleaf plants.

Dicamba was a hot topic at the annual American Honey Producers Association meeting earlier this month, said Darren Cox, a Utah beekeeper who stepped down as head of the association last year.

“We’re very concerned about dicamba and the impacts it’s having on the honey industry and the health of bees,” Cox said.

This year’s honey crop was “very poor” in several regions, he said. Drought in several top honey-producing states not only depleted bees’ forage, but also led to more herbicide use because stressed plants don’t easily absorb the chemicals. As a result, Cox said, “you tend to have weaker hive strength because of lack of forage and nutrition.”

South Dakota, where Adee Honey Farms is based, reported about 250,000 acres of dicamba-injured soybeans since 2017. The Adees typically manage 80,000 to 90,000 hives, “but our numbers have been so destroyed the last couple of years, we’ve started using other people’s bees,” Adee said.

More than 70 percent of the nation’s commercial honeybees are shipped to pollinate California’s million acres of almond orchards every winter. But this season, beekeepers have been struggling to fill their trucks with hives and are facing massive cuts to what is typically their biggest paycheck of the year.

Lyle Johnston, president of the Colorado Professional Beekeeping Association, typically sends almond farmers 75,000 hives, including about 7,000 of his own. Johnston hasn’t had trouble with his bees, which he raises far from agricultural fields. (Colorado is among 34 states where it’s legal to spray dicamba on genetically modified crops, though few acres are planted with soybeans.) But in three decades of running bees to California, he says he’s never had so many beekeepers tell him they’ve come up short. Coy and several other beekeepers who typically send him as many as 10 truckloads of bees are sending half that this season.

“It’s going to be a train wreck come the 5th of February, when the bloom starts,” Johnston said.

Many beekeepers near soybean fields said they are losing half their hives – losses similar to those attributed to colony collapse disorder.

“We can’t breed bees fast enough to keep up with the losses and maintain healthy colonies,” Adee said.

Gary Mackrill of North Dakota’s Mackrill Honey Farms thinks dicamba sprayed near his hives might be making bees more vulnerable to pathogens, cold and other stressors. Mackrill lost nearly 40 percent of his hives last fall. The year before was even worse, he said.

“Our bee outfit has been devastated,” he said.

Over the last two years, when hundreds of thousands of acres of North Dakota soybeans were damaged by dicamba, Mackrill lost some 3,000 hives and more than a quarter-million dollars in pollination contracts. Last year, North Dakota banned dicamba applications after June 30, but it was too late. 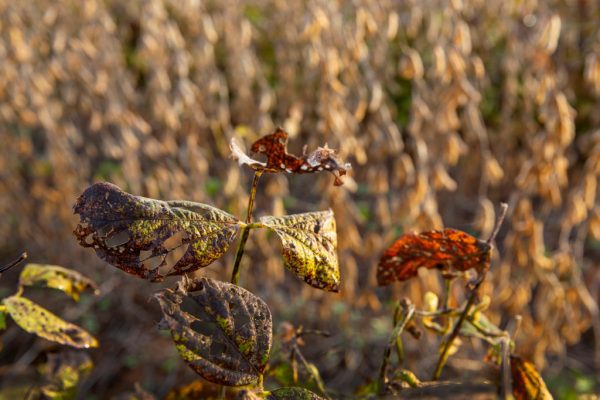 By early July, “the honey flow just turned off like you turned off a faucet,” Mackrill said. “And it never resumed.”

Then after a cold snap hit North Dakota in the fall, Mackrill’s bees started freezing to death. Even when the mercury dips below zero, you might see a couple of dead bees, he said, “but handfuls of dead bees? That’s abnormal.”

Whether dicamba is affecting bees’ ability to stay warm is unclear. Mackrill hopes to find out by sending samples of dead bees to Strong Microbials, run by microbiologist Slava Strogolov in Milwaukee. Strogolov will test for dicamba and other pesticides in the bees’ guts.

“Whenever honeybees land on the flower that’s been sprayed, they will ingest that pollen and the gut microbes will be the first ones exposed to these chemicals,” he said.

Honeybees rely on gut bacteria to digest pollen. If they don’t get enough pollen, they can’t make the fat they need to handle the cold.

Coy became convinced that plummeting honey production at Coy’s Honey Farm, which is Arkansas’ largest beekeeping operation, was due to dicambaafter reading one of Mortensen’s studies. The research showed that doses of dicamba that mimicked the drift associated with spraying the weed killer delayed flowering and reduced by half the number of flowers that plants produced and the number of pollinator visits.

Coy first saw dicamba symptoms on a major bee food called redvine, a flowering plant that snakes through tree canopies along fence rows. In 2017, the vine’s shiny teardrop leaves looked warped and wilted. By last summer, he said, the vines were dead.

Bees depend on redvine for nectar and pollen, the protein source that helps hives survive freezing temperatures, parasites and other stressors. If queens lack pollen, they won’t lay eggs and the population stagnates or declines.

When Coy inspected hives closer to Mississippi, at sites where farmers didn’t use dicamba, he found redvine bursting with seed pods and flowers. Nearby hives hummed with bees that produced a hundred pounds of honey and five to six frames of stored pollen.

But the majority of hives in Arkansas, where the Coys kept most of their 13,000 hives, were too anemic to ship to California almond growers. Last year, Coy said, “turned out to be a disaster for us.” 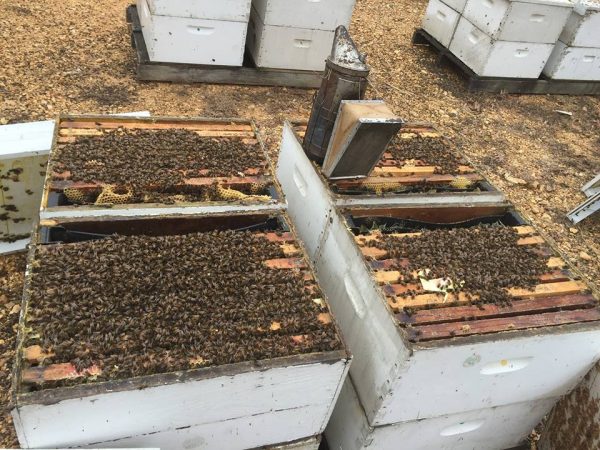 In years past, some commercial beekeepers tried moving their hives into Arkansas’ hill country to get away from pesticides, said Jon Zawislak, a University of Arkansas extension entomologist and apiary expert. But seasonal drought in July and August leaves wildflowers in the hills without much nectar and beehives without much honey. Historically, hives did better around agriculture, he said, because irrigated fields kept flowers blooming, and beekeepers would shift the bees around to avoid pesticides.

But moving hives doesn’t work with a weed killer like dicamba that can evaporate for days after spraying.

“The situation with dicamba is brand new,” Zawislak said. Beekeepers are trying to adapt, he added, “but they can’t maintain hundreds or thousands of colonies in areas that simply don’t produce anything.”

And although agricultural fields help bees weather drought, Zawislak’s recent research shows that bees get the lion’s share of their pollen from wild vegetation.

On New Year’s Day, after losing more than a million dollars’ worth of honey and pollination contracts over the past two years, the Coys closed Crooked Creek Bee Co., their retail honey business, and made plans to relocate to Mississippi.

“We can only produce about 50 percent of the honey that we’ve produced prior to in-crop use of dicamba,” Coy said. “We have no choice but to leave Arkansas.”

This story was edited by Marla Cone and copy edited by Nikki Frick.