Beginning Of The End For Canada’s Tar Sands Or Just A Blip?

Above Photo: Alberta’s tar sands are among the most carbon-intensive sources of oil. The Canadian province announced it would temporarily curtail oil production in 2019 in the face of a saturated market and depressed prices. Credit: Mark Ralston/AFP/Getty Images

Alberta has announced an oil production cut, citing tight pipeline capacity. It’s an effort to buy time for the industry, but it doesn’t fix the underlying problems.

When hundreds of activists protesting the Keystone XL pipeline were arrested at the White House in 2011, their ultimate target lay thousands of miles away: Canada’s tar sands. If they stopped the pipeline, they argued, that could slow the growth of this particularly dirty source of oil and score a limited but significant win for the climate.

This week, with the market saturated and prices depressed, Alberta’s premier announced that her government would temporarily curtail the province’s oil production, chiefly from the tar sands, because there isn’t enough pipeline capacity to ship the crude to market.

It was a startling announcement from a government whose prevailing energy policy has been to promote more production of its bitumen—known as tar sands or oil sands—which ranks among the most carbon-polluting sources of oil.

“This is definitely a big deal,” said Josh Axelrod of the Natural Resources Defense Council, one of the advocacy groups that has tried to block Keystone XL. “When the aim of the campaign is to level off production,” he said, “to see that day when the first cuts happen for exactly the reason you have argued would happen, it’s quite amazing.”

The reasons for Alberta’s decision to rein in production are complex—the government’s goal is for output to eventually grow again.

It’s an effort to buy time for the industry, but it doesn’t fix the underlying problems. And it raises the question: is this the beginning of the end for Canada’s oil sands?

Why Alberta Is Cutting Production

On Sunday, Premier Rachel Notley announced that starting in January, her government will impose production cuts amounting to 325,000 barrels per day, or nearly 9 percent of the province’s output. Alberta produces most of Canada’s oil, nearly two-thirds of which comes from the tar sands.

Her goal is to boost prices for Western Canadian crude. The prices have plummeted over the past year, pulling with them government revenues, which rely on royalties pegged to the local oil price benchmark. As the benchmark rises in response to the new production cuts, Notley said, her government will roll back the curtailment over the course of 2019. 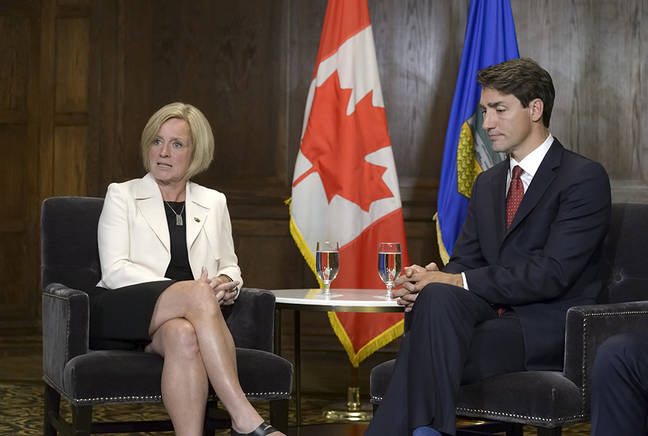 Alberta Premier Rachel Notley meets with Canadian Prime Minister Justin Trudeau. Trudeau earlier this year tried to help the oil industry by having the government purchase the Trans Mountain pipeline project, but that’s now tied up in the courts. Credit: Premier of Alberta

New oil sands projects that were planned years ago have continued to come online over the past year, boosting production. Those projects were launched with the expectation that new pipelines would be completed by now. But most of the major pipeline proposals have been either delayed or canceled. The result has been a glut of oil filling storage tanks in Canada.

Western Canadian crude normally fetches lower prices than most oil pumped in the United States—it’s a heavy oil that costs more to refine, and it’s farther from those refineries so costs more to transport. But that gap between the Canadian benchmark and its American counterpart recently grew to its widest in years, primarily because of the shortage of pipeline capacity. At one point last month, the Western Canadian benchmark dropped below $13 per barrel, about $40 less than the American price. 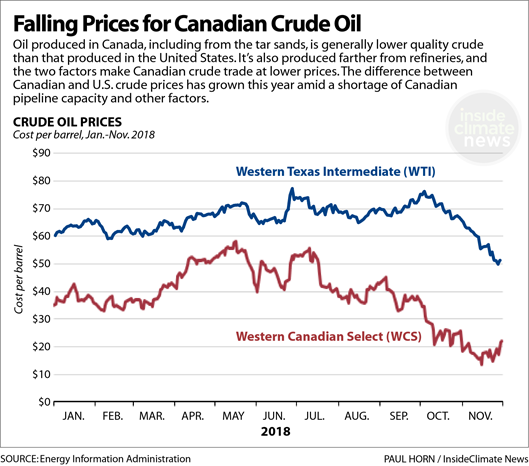 Kent Fellows, an economist at the University of Calgary School of Public Policy, said any victory for climate campaigners may be short-lived. “It’s a big chunk,” he said of the production cut, “but it’s a temporary chunk.”

Temporary Hit, or the Beginning of the End?

There are reasons to believe the need for the curtailment could last or could at least be a sign of bigger trouble for the tar sands. Alberta’s government is counting on a couple of developments to allow it to end its curtailment by the end of next year.

First, Notley said she expects a new pipeline expansion project—Enbridge’s Line 3—to come online in late 2019. That project cuts through Minnesota to reach refineries in the Midwest. State regulators approved the project this year, but it has faced strong resistance from activists and even from a separate state agency.

Axelrod said legal challenges could delay the project, and he doubts it will be completed next year.

Another major pipeline project that Notley’s government has been lobbying for—the Trans Mountain expansion—would bring more oil from Alberta to a British Columbia port. The federal government bought the pipeline project this year after its owner warned it might abandon it, and a judge later halted development and ordered the government to restart negotiations with indigenous tribes.

In the U.S., a judge recently blocked construction of Keystone XL, which would bring tar sands oil to the Gulf Coast, saying the Trump administration had failed to conduct a proper environmental review. The pipeline, proposed a decade ago, has faced a series of lawsuits, protests and delays.

In lieu of new pipelines, oil companies increasingly have been shipping their product by rail. Notley’s government recently said it would buy its own rail cars to help boost capacity. But shipping by rail is more expensive than using pipelines.

This uncertainty, together with years of relatively low global oil prices, led most multinational oil companies to pull out of the tar sands. Only one major new project has been announced over the past few years: In November, Imperial Oil, ExxonMobil’s Canadian affiliate, said it would spend CA$2.6 billion (US$1.9 billion) on a new oil sands operation.

A failure to complete new pipelines by late next year would likely make it harder for production to grow much, said Kevin Birn, an energy analyst at IHS Markit.

Another looming problem for the oil sands is a plan by the shipping industry to cut sulfur emissions: oil from the tar sands tends to be high in sulfur, so will be more expensive to refine for ships.

What Does It Mean for the Climate?

What’s clear is that energy companies in Alberta’s tar sands will produce less oil than they were planning to, at least in the short term.

Much of that drop in production could be made up by producers boosting output elsewhere—in the United States or Saudi Arabia, perhaps. But some research has indicated that if you take a barrel of oil off the global market, it doesn’t get replaced one-to-one. In other words, there may be a drop in global oil production this coming year—tiny as it may be—compared to what would have happened without Alberta’s production cuts.

What’s more, because oil from the tar sands emits significantly more greenhouse gas pollution than the average barrel of crude, any oil that replaces it is likely to be cleaner. Bottom line: the world’s oil may emit fractionally less carbon next year.

It’s a drop in the bucket—in order to limit warming to less than 2 degrees, global carbon emissions likely have to peak by 2020 and reach zero in a few decades—but Axelrod said he hopes Albertans, and Americans, see the production cuts as an opportunity to discuss a transition away from fossil fuels.

“It creates space for climate policy to come in and fill the gap with an alternative,” he said.