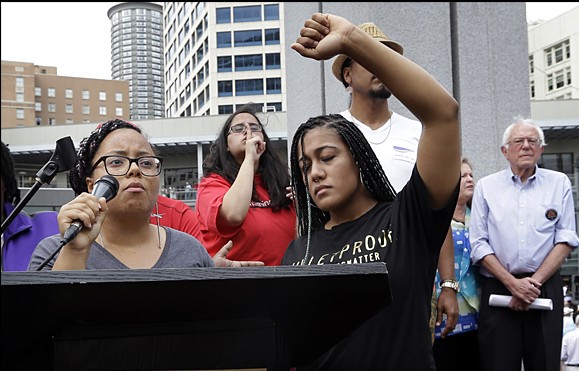 Behind The Shiny Veneer Of Seattle’s White Liberalism

Marissa Johnson, left, speaks as Mara Jacqueline Willaford holds her fist overhead and Democratic presidential candidate Sen. Bernie Sanders, I-Vt., stands nearby as the two women take over the microphone at a rally Saturday, Aug. 8, 2015, in downtown Seattle. The women, co-founders of the Seattle chapter of Black Lives Matter, took over the microphone and refused to relinquish it. Sanders eventually left the stage without speaking and instead waded into the crowd to greet supporters. (AP Photo/Elaine Thompson)

The other weekend, Seattle got called out on race.

When two young black women from #BlackLivesMatter disrupted a rally that Bernie Sanders was speaking at, we saw a crowd of progressive, mainly white liberals spiral into anger, frustration, and even hate.

If the conversation stays focused on debating the tactics used by the activists, we’re missing the point.

Were the actions of these women uncomfortable to watch? Yes. Did they upend a carefully planned event that progressive organizers had spent months working on? Yes. Did they use the most effective tactics, in the most effective way? That question detracts from the bigger, and far more important question of what it means to be a white ally in the fight to dismantle systemic racism.

If two people’s actions cause someone to revoke their support of the #BlackLivesMatter movement, it begs the question of whether their support was ever there to begin with.

Black lives matter all the time. They don’t just matter when it’s convenient, easy, or popular. Undoing institutional and structural racism is going to take people stepping up, speaking out, and taking action. Numerous different tactics will have to be employed simultaneously, including nonviolent direct action.

This process won’t always be comfortable or polite. What we saw that Saturday was a raw display of emotion from two women who wanted to have a discussion about race on their terms. Their actions certainly disrupted the expectations of the mostly white crowd, but it was more than that. They directly challenged white cultural norms about the most effective way to make change.

The notion that the women’s actions were disrespectful and unproductive, or not how we “do business,” feeds into our city and country’s dominant narrative that our democracy is an open process that’s accessible to everyone — all you have to do to have your voice heard is follow the right steps.

But what happens when you’re screaming as loudly as you can and nobody is listening? The argument that there’s a time and a place for these conversations prioritizes the comfort of white people over the urgent crisis facing black people in our country. And as we continue to wait, more and more of our brothers and sisters are being killed, arrested, and pushed out of school.

Another sentiment that’s been widely shared since the rally is that Bernie Sanders is “on our side,” and “the best chance we’ve got.” That line of thinking implies that we can’t push white people to discuss race. That we should take what’s given to us, without fighting to create what we need: a system that truly values and recognizes black lives — not just sometimes, but always.

Consider this: if the target had been Donald Trump, our guess is that progressive liberals across the country would be heralding the women’s actions as courageous, bold, and necessary.

It’s more personal when the anger is directed at a well-intentioned white person with an undeniable progressive track record. It forces people to confront the ugly fact that our systems and culture are built off of the oppression of black people. And that every person who is not actively working against that structure plays a complicit role in upholding it.

To us, it all comes back to #BlackLivesMatter. Every conversation about economic justice — and any social justice issue — needs to be centered on race, and black lives. When we lead with those most impacted, that’s when we create transformational change that supports everyone.

Today’s #BlackLivesMatter movement is a direct extension of the Civil Rights Movement. We’re still working to realize the dream of the generations that came before us. While the fight might look different, with the racism more carefully concealed through policies pretending to be colorblind, it is just as real.

We can use what happened the other weekend to pull back the shiny veneer of Seattle’s white liberalism and have an honest conversation about race and what it means to be a white ally. Or we can get caught in an endless cycle of debating whether or not the activists tactics were appropriate.

Our hope is that it’s the former.

Rachael DeCruz is on the Executive Board of the Seattle King County NAACP, and serves as Communications Chair.