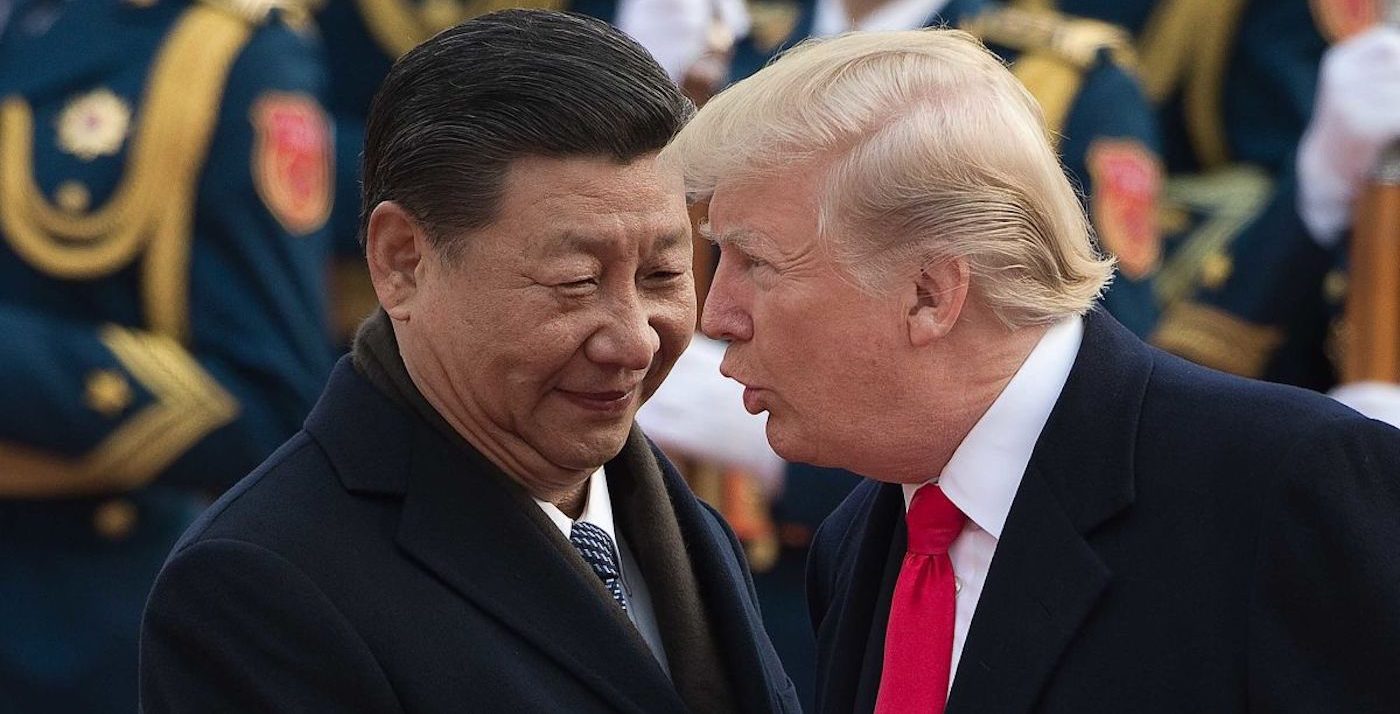 Everyone was expecting US President Donald Trump to go nuclear by de facto sanctioning China to death over Hong Kong. In an environment where Twitter and the President of the United States are now engaged in open warfare, the rule is that there are no rules anymore.

So in the end, what was announced against China amounted to an anti-climax.

The US government, as it stands, is terminating its relationship with the World Health Organization (WHO). The geopolitical repercussions are immense and that will take time to sink in. In the short term, something must be blamed for the US’ appalling Covid-19 record, so it might as well be a UN institution.

Hong Kong’s preferential trade status will also be terminated, but in a hazy future in still undetermined terms.

Phase 1 of the US-China trade deal still stands – at least for now. Yet there’s no guarantee that Beijing itself won’t start to doubt it.

The bottom line: “Investors” were duly appeased, for now. Team Trump seems not to be exactly versed in the niceties of Hong Kong’s Basic Law, as the president stressed the “plain violation of Beijing’s treaty obligations with the United Kingdom.” The national security law was blasted as “the latest” Chinese aggression against its own special administrative region.

Now compare all this with the Two Sessions in Beijing ending the day before, with an intriguing, quite Keynesian performance by Prime Minister Li Keqiang. This was compelling as much for what Li did not say as for what he chose to put on the public record.

Let’s review some of the highlights. Li stressed that the NPC’s resolution putting forth a national security law for Hong Kong is meant to protect “one country, two systems,” and not as an “aggression.”

Instead of demonizing the WHO, Beijing is committed to a serious scientific investigation of the origins of Sars-Cov-2. “No cover-up” will be allowed, Li said, adding that a clear, scientific understanding should contribute to global public health. Beijing also supports an independent review into the WHO’s handling of Covid-19.

Geopolitically, China rejects a “Cold War mentality” and hopes China and the US will be able to cooperate. Li stressed the relationship could be either mutually beneficial or mutually harmful. Decoupling was described as a very bad idea, for bilateral relations and for the world at large. China, after all, will start to import more and that should also profit US companies.

Domestically, the absolute focus – 70% of the available new funding – will be on employment, support for small and medium enterprises and measures to encourage consumption rather than investment in infrastructure building. In summation, in Li’s own words: “The central government will live on a tight budget.”

If not completely Sisyphean in the long term, it will at least be a “daunting task” in Li’s terminology considering the previously stated end-of-2020 deadline would be to reach President Xi Jinping’s goal of eliminating poverty across China.

Li said absolutely nothing about three key themes: the alarming Himalayan border stand-off between China and India; the prospects for Belt and Road Initiative (BRI) projects; and China’s complex geopolitical and geo-economic relationship with the European Union (EU).

The non-mention of the last theme is especially noticeable after Chancellor Merkel’s quite encouraging assessment earlier this week and EU foreign affairs chief Josep Borrell’s remark to a group of German ambassadors that “the end of an American-led system and the arrival of an Asian century” is now “happening in front of our eyes.”

Confirming steady rumors emanating from Frankfurt, Berlin, Brussels and Paris, China and East Asia are taking precedence as the EU’s top trading partner. This is something that will be extensively discussed at the upcoming EU-China summit next autumn in Germany. The EU is going Eurasia. Team Trump won’t be amused.

Predictably, the Beijing leadership needs to focus on domestic consumption and reaching the next level on technological production so as not to fall into the notorious “middle-income trap.” Fine-tuning the balance between domestic stability and a very strong and wide global reach is another tak that brings Sisyphos to mind.

Xi, Li and the Politburo very well know that Covid-19 hugely affected migrants, farmers and small-scale family entrepreneurs. The risk of social unrest is very high. Unemployment protection is far from Scandinavian levels. So back to business, fast, has to be the top priority.

Enveloping this strategy is a new diplomatic offensive. Foreign Minister Wang Yi, usually meticulously nuanced and polite, is now increasingly exasperated. Earlier this week, Yi defined the demonization of China by the US over Covid-19 as “a product of the three no’s”: no grounds, no factual basis and no international precedent.

Moreover, he described attempts to blackmail China through threats as “daydreaming.”   The Global Times, for its part, has blasted the Trump administration for “typical international hooliganism” and additionally stressed that “labeling Chinese diplomacy as ‘wolf warrior’ reflects an extreme ideology.”

The “wolf warrior” plot is bound to thicken. Beijing does seem ready to deploy its diplomatic force as wolf warriors. One should always keep in mind General Qiao Liang: if China is forced to dance with wolves, it might as well set up the rhythm.

That applies perfectly to the Hong Kong question. Whatever Team Trump thinks, Beijing has no interest whatsoever in disturbing the Hong Kong financial system or collapsing the Hang Seng index. That’s exactly what the black block protesters last year were accomplishing.

What we saw during this week is the result of what a task force, sent to Shenzhen last year to examine every angle of the protests, relayed back to the leadership in Beijing.

The sources of financing for the hardcore black blocks have reputedly been cut. The local 5th columnist “leaders” have been isolated. Beijing was being very patient tackling the whole mess. Then along came Covid-19.

The economic consensus in Beijing is that this will be an L-shaped recovery – actually very slow on the bottom of the L. So the West will buy much less from and invest much less in China.

This implies that Hong Kong is not going to be very useful. Its best bet has already been offered many times over: integrate with the Greater Bay Area and be part of a booming Pearl river delta southern cluster. Hong Kong businesses support it.

Another conclusion was that, whatever Beijing does, the Sinophobic hysteria in the US – and in this case also the UK – is unabated. So now is the right moment to go for the national security law, which of course is against subversion, against British-era “wigs” (judges) acting as 5th columnists and, most of all, against money laundering.

A Global Times editorial cut to the chase: the national security law is the “death knell” for US intervention in Hong Kong.

As much as Yi may have said, this time diplomatically, that we’re “on the brink” of a new Cold War, the fact is the Trump administration’s hybrid war on China – or Cold War 2.0 – is now fully established.

US Secretary of State Mike Pompeo is openly threatening Five Eyes allies and vassals, as well as Israel, with consequences if they fail to ditch any projects linked to Belt and Road.

That is intimately linked to the avalanche of threats and measures against Huawei and everything connected to Made in China 2025, which proceeds at a fast pace but without using the terminology.

The ultimate objective shared by every Sinophobic strand, whether commercially-minded or think tank-based, is to derail the Chinese economy – a top level competitor – by any means necessary and thus cripple the ongoing Eurasian integration process whose three key nodes, China, Russia and Iran, happen to be top “threats” according to the US national security strategy.

Once again, the gloves are off. And Beijing won’t stop counterpunching in kind.

It’s as if Beijing had so far serially underestimated the Deep State and Beltway’s larger than life obsession with always remaining the undisputed hegemon, geopolitically and geo-economically. Every “conflict” erupting across the chessboard is and will continue to be directly linked to the twin objectives of containment of Russia and disruption of the Belt and Road.

I previously referred to the Empire of Chaos, where a plutocracy progressively projects its own internal disintegration upon the whole world. But only now is the serious game starting, complete with Trump’s intention to test nuclear bombs again. Not against a bunch of low-life “terrorists,” but against a serious, peer-competitor: the Eurasian strategic partnership.

It would be too much to expect Team Trump to learn from Gramscian analyses of Belt and Road, which demonstrate how the Chinese Dream – a Confucianist variant of neoliberalism – marks the evolution of China into a core production zone in the neoliberal world economy by profiting from the existing global legal structure.