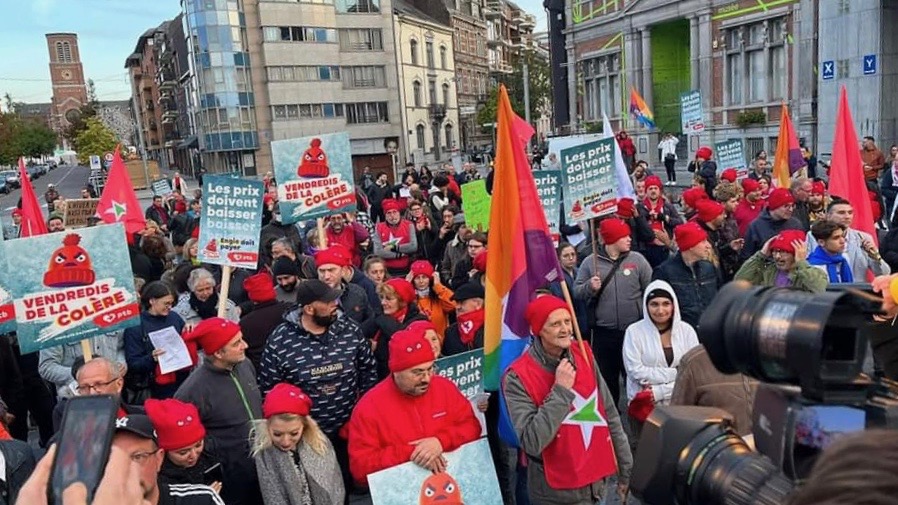 The Workers Party of Belgium (PTB/PVDA) has demanded that the government cap the rise in fuel and food prices, increase wages and pensions, and tax the excess profits made by energy corporations like Engie-Electrabel.

Belgium – On Friday, September 30, the Workers Party of Belgium (PTB/PVDA) launched weekly protests called ‘Fridays of Rage’ (Vendredis de la Colère) against the government’s failure to tackle the ongoing cost of living crisis. Protests were held on Friday in the cities of Kortrijk and La Louvière with the call to bring down the prices of food, energy, and other essentials. Along with activists of the PTB/PVDA, cadres of youth and student groups like COMAC and RedFox took part in the protests. The protesters also demanded that the government tax the energy multinational that they say is benefiting from the crisis. More protests have been scheduled for October 7 in Liege, Saint Nicolas, and Genk, in Gare du Nord and Ghent on October 14, and in Namur and Antwerp on October 21.

Working class sections in Belgium have been regularly organizing protests with the demand that the government tackle the ongoing cost of living crisis marked by soaring inflation in food and energy prices. The PTB/PVDA has demanded a reduction of VAT on energy from 21% to 6%. The party, along with trade unions, has also demanded an increase in wages and pensions, and to repeal the 1996 Wage Margin Act that works as an obstacle to negotiating a maximum average wage increase. Food and fuel prices are skyrocketing across Europe due to the energy crisis caused by the Russia-Ukraine war and profiteering by private energy producers and distributors like Engie-Electrabel.

In its appeal to people to support the protest, the PTB/PVDA stated, “while, for more and more people, heating up is ruining them, Engie-Electrabel pockets megaprofits on our backs. What about governments? They squabble and pass the buck to each other.”

The party has demanded that the government reduce and cap energy prices, make Engie-Electrabel pay for the crisis, and to put energy in the hands of the community. Electrabel, a subsidiary of the French multinational Engie, has a major hold on the Belgian energy sector.

The PTB/PVDA also slammed Belgian Prime Minister Alexander De Croo’s statement that  “five to 10 difficult winters are going to be tough for the people.”

In response to this statement, the party said, “We will not accept that! We are going to give voice to our anger, but we are also going to rekindle hope.”

PTB/PVDA’s Tony Busselen told Peoples Dispatch that “against this government that is complicit with the energy multinationals, we are not standing idly by. This mobilization is a first step of a larger movement. Each week, there will be Fridays of Anger in different cities. The trade unions will also be in action, including a general strike on November 9. They can count on the support of the PTB.”

“We will be active in the neighborhoods and on the roundabouts, to pressure the government to act on the people’s demands. And by organizing collective resistance, we also instill hope in an otherwise bleak situation,” he added.