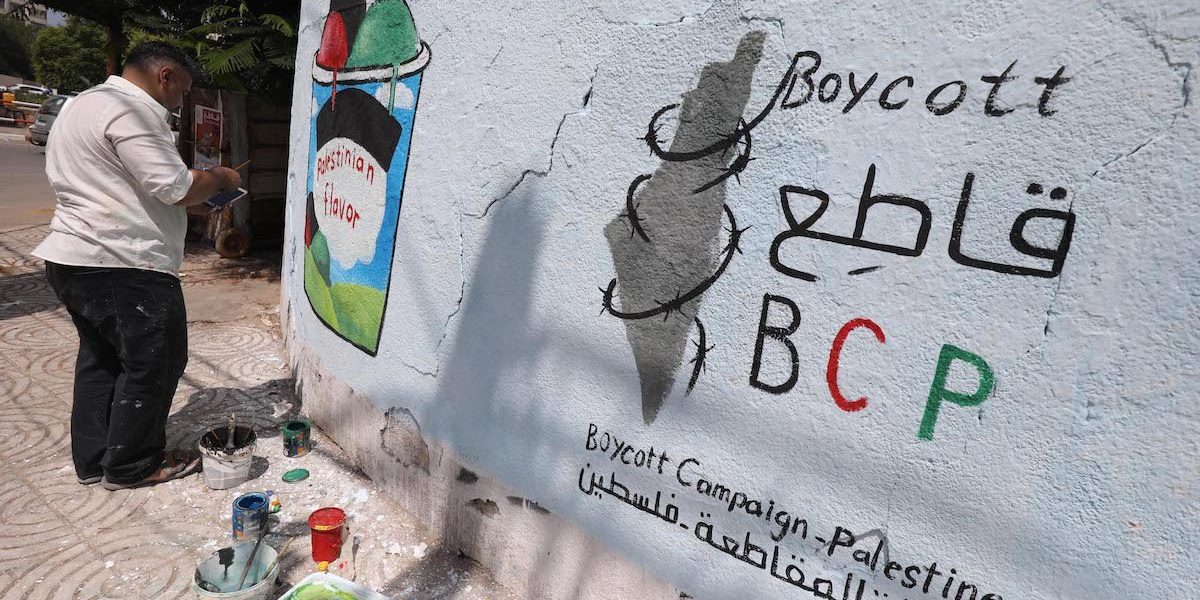 Ben And Jerry’s Punished By Arizona For Israeli Boycott

Above Photo: Palestinians stand up in support of Ben & Jerry’s in Gaza on 29 July 2021. Mohammed Asad/Middle East Monitor.

The US state of Arizona has taken the decision to punish Ben & Jerry’s, one of America’s most successful firms, for the company’s boycott of illegal Israeli settlements. The global ice cream brand decided in July to end the sale of its products in the Israeli-occupied Palestinian territories. Although the decision was seen as a major victory for the Boycott, Divestment and Sanctions (BDS) movement, a severe backlash from pro-Israel groups has been anticipated ever since.

Kimberly Yee announced on Tuesday that Arizona State is disinvesting in Ben & Jerry’s parent company Unilever, saying that the boycott decision was in violation of Arizona law. The state treasurer said that its investments in Unilever had been reduced from $143 million in June to $50 million and will drop to zero by 21 September.

“Arizona will not do business with companies that are attempting to undermine Israel’s economy and blatantly disregarding Arizona’s law,” said Yee, who is running for governor in 2022. “As Arizona’s chief banking and investment officer, I stand with Israel, and I will not allow taxpayer dollars to go toward anti-Semitic, discriminatory efforts against Israel.”

Arizona’s decision to punish the American firm is the most significant state-level decision in support of the occupation state over this matter. The state’s anti-BDS legislation, passed in 2016, stipulates that public state bodies may not invest money with an entity that boycotts Israel or territories under Israeli control, which under international law are considered to be occupied territory.

Of the 50 states in the US, 21 include the boycott of illegal settlements explicitly as part of their respective definitions of what constitutes a boycott of Israel. The decision by Arizona appears to be a direct response to the call for action made by the Israeli government to the 30-plus US states with laws banning boycotts of the Zionist state. Illinois is said to be assessing whether to divest from Unilever. Over a month ago, it gave the conglomerate 90 days for Ben & Jerry’s to reverse its decision.

Ben & Jerry’s move followed a stream of reports by human rights groups and the UN, and articles by former Israeli ambassadors labelling Israel as an apartheid state. The ice cream firm’s founders, Bennett Cohen and Jerry Greenfield, explained that the company drew a line between what they called the “democratic territory of Israel and the territories Israel occupies” and that “the decision to halt sales outside Israel’s democratic borders is not a boycott of Israel.”

In July, a coalition of progressive Jewish groups sent a letter to 33 governors calling on US states not to penalise Ben & Jerry’s and Unilever for the move. They pointed out that boycotting Israeli settlements is not anti-Semitic, but a way to encourage a two-state solution, a policy long supported by both Democrats and Republicans. Rights groups insist that US laws banning BDS are unconstitutional and warn that the adoption of measures criminalising boycotts will have a chilling effect on free speech, which is protected by the First Amendment of the US Constitution.