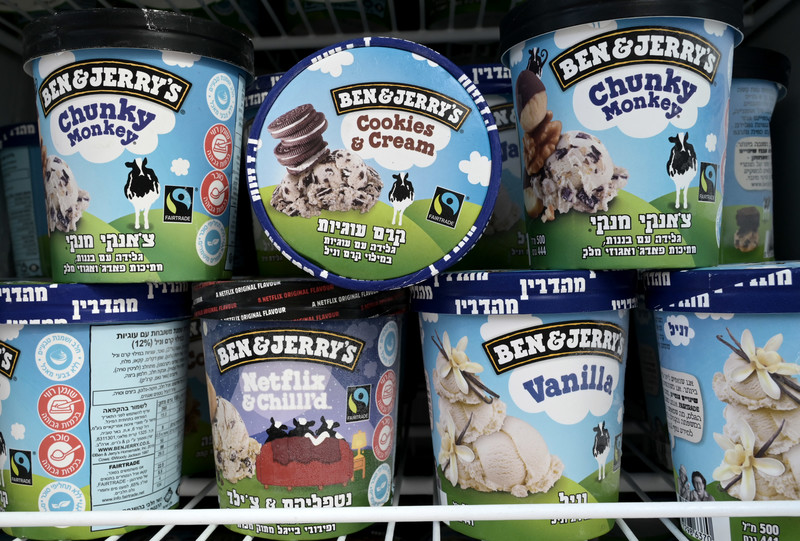 Above Photo: Vermont-based Ben & Jerry’s says that ice cream marketed with its name and insignia in Israel and the occupied West Bank has nothing to do with it. Debbie Hill/UPI.

Ben & Jerry’s has repudiated the ice cream sold under its name in Israel and the occupied West Bank by an Israeli company.

The sale of the frozen treats in Israeli settlements built on Palestinian land in violation of international law is at the heart of a legal dispute between Ben & Jerry’s and its owner Unilever.

“Without the consent of Ben & Jerry’s Independent Board, Unilever has sold trademark rights to the Hebrew and Arabic language versions of the Ben & Jerry’s name to Blue & White Ice Cream Ltd,” Ben & Jerry’s independent board said Tuesday.

Ben & Jerry’s reiterated that “the sale of products bearing any Ben & Jerry’s insignia in the occupied Palestinian territory is against our values. Such sales are inconsistent with international law, fundamental human rights and Ben & Jerry’s social mission.”

Blue & White Ice Cream Ltd is a company owned by Avi Zinger, the former Israeli licensee to which Unilever purports to have transferred Ben & Jerry’s trademarks and intellectual property in Israel.

Ben & Jerry’s announcement on Tuesday comes as the legal dispute between the Vermont-based ice cream maker and its parent company over the matter appears to be heating up.

In July 2021, Ben & Jerry’s decided that it would end a longstanding licensing agreement that allowed its products to be manufactured and sold in Israel and the occupied West Bank, following years of campaigns by Palestinian rights activists.

A year later, however, Unilever announced that it had sold the Ben & Jerry’s brand and trademark in Israel to the Israeli licensee.

Under this deal, the ice cream would continue to be marketed throughout Israel and the occupied West Bank using the Ben & Jerry’s logo in Hebrew and Arabic.

Unilever admitted that it made the move under threats and pressure from Israel and its lobby.

But Ben & Jerry’s disputed Unilever’s right to make the deal.

In July it sued Unilever in federal court in New York, claiming that the transfer of the ownership of its trademarks and intellectual property to the Israeli company violated the acquisition agreement that Ben & Jerry’s signed when Unilever bought it in 2000.

Under the agreement, Ben & Jerry’s retained an independent board “empowered to protect and defend Ben & Jerry’s brand equity and integrity.”

The board says it was never consulted by Unilever over the sale of its rights to the Israeli company and that the action undermines Ben & Jerry’s renowned advocacy on progressive social issues, a core feature of its brand.

Over the summer, efforts to settle the dispute through mediation failed, reportedly because Ben & Jerry’s did “not want to ‘cave’ on its social mission and stance on Palestinian human rights.”

At the end of September, Ben & Jerry’s filed an amended complaint with additional allegations against Unilever.

These include misconduct by Unilever against the board, such as refusing to pay directors their compensation.

This was “particularly egregious given the security threats that board members have faced, leaving individual Board members to pay for their own security measures – including relocation –while not being compensated,” the complaint states.

The lawsuit does not specify the nature of the security threats, but it is alarming that threats board members faced after taking a stance in support of Palestinian rights were so severe that they were effectively forced to go into hiding.

Another key claim is that Unilever secretly transferred Ben & Jerry’s trademarks to a Unilever-owned entity without informing or consulting the independent board just months after the 2000 merger, flagrantly violating the acquisition agreement.

Ben & Jerry’s says in the amended complaint that this secret transfer only came to light in court papers filed by Unilever this summer in response to the lawsuit.

Ben & Jerry’s alleges that the surreptitious transfer was an “attempted end-run around Ben & Jerry’s rights and protections.”

The amended lawsuit also reveals how effective public and activist pressure was in getting Ben & Jerry’s to address its complicity in Israel’s violations of Palestinian rights.

It notes that the company “had begun receiving complaints regarding the human rights implications of selling its products in the West Bank” as early as 2013. In response, the board formed a special committee and sent multiple fact-finding missions to the region.

One such delegation in 2019, including Ben & Jerry’s CEO Matthew McCarthy, other top executives and board chair Anuradha Mittal, met “members of the Israeli government, human rights organizations such as Human Rights Watch, former Israeli soldiers, local farmers, Palestinian representatives and UN agencies,” according to the complaint.

In the meantime, “pressure continued to grow,” with McCarthy and the company receiving “hundreds of emails” expressing “concerns regarding the human rights implications of Ben & Jerry’s continued sales in the West Bank.”

But the lawsuit alleges that McCarthy – who was appointed by Unilever as Ben & Jerry’s CEO – “failed to inform the board about the number of emails.”

There was also huge pushback on social media. The complaint cites, for example, how in June 2020, “Ben & Jerry’s experienced a 204 percent increase in mentions relating to its business in the West Bank and Palestinian rights.”

As McCarthy and Unilever dragged their feet over these calls for action, Ben & Jerry’s managers and board members expressed concern that the issue could no longer be brushed aside.

“We will need to focus on this issue … before this turns into a huge campaign against us,” board chair Mittal wrote to CEO McCarthy and parent company Unilever in June 2020.

The same month Mittal wrote to them again emphasizing that “the slow pace” on the question of trading in Israeli settlements is “becoming a threat to the business, social mission and brand integrity” of Ben & Jerry’s.

One Ben & Jerry’s employee wrote, “I don’t think I can overstate just how much of a danger this is to our activism in Europe.”

That was only the tip of the iceberg. A group of 28 Ben & Jerry’s managers wrote to McCarthy expressing their frustration: “We believe that our activities in Israel contravene our social mission and values and seriously impede our activism work.”

The managers noted that they were already seeing a “backlash” that was “affecting both the credibility of what we can do and the ability to work with progressive partners on campaigns and projects.”

At one point, the ice cream maker’s global social mission officer stressed, “I believe this is getting quite urgent.”

But according to Ben & Jerry’s lawsuit, Unilever and McCarthy didn’t see it that way and continued to procrastinate. So the board took action itself, culminating in the July 2021 decision to end the licensing agreement with the Israeli company.

Ben & Jerry’s notes that its decision to end sales in Israel was supported by its founders Ben Cohen and Jerry Greenfield, and that even Unilever issued a statement confirming that it had “always recognized the right of the brand and its independent board to take decisions about its social missions.”

But a year later, under pro-Israel pressure, Unilever reversed course. Its purported sale of the Ben & Jerry’s brand in Israel to the Israeli licensee was hailed by Israel and its lobby as a blow to the Palestinian campaign for boycott, divestment and sanctions.

It was, however, a hollow victory.

Far from making the issue melt away, Unilever’s actions have ensured that the unethical profiteering of multinational businesses from Israel’s system of occupation, settler-colonialism and apartheid will remain front and center as the lawsuit grinds on.

Ben & Jerry’s is asking the court to stop Unilever from doing anything further to facilitate ice cream sales using its trademarks and intellectual property in Israel, to return ownership of all its trademarks to Ben & Jerry’s and to pay damages and legal costs.