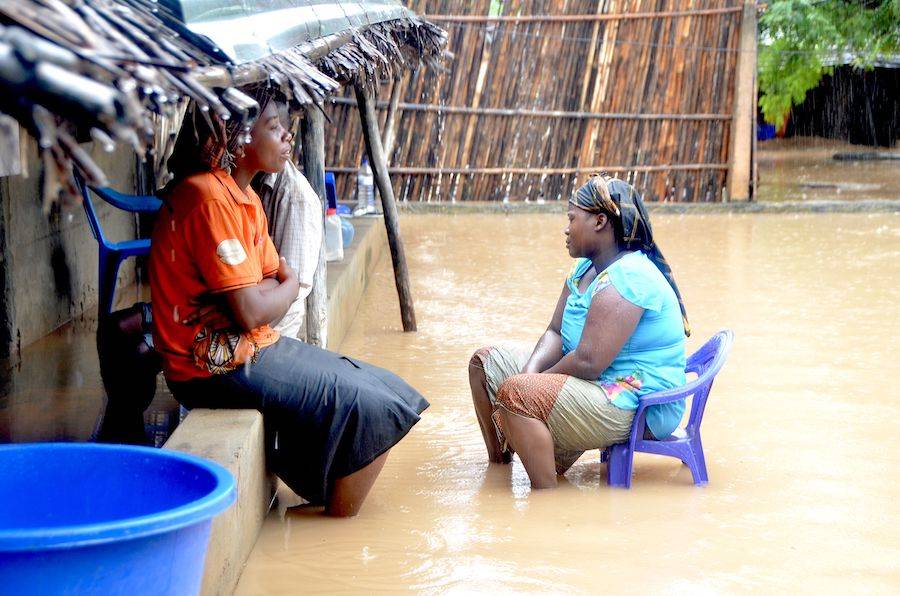 Above Photo: Cyclone Idai’s days of extreme rainfall, flooding and mudslides killed hundreds of people and left a trail of destruction across Mozambique in March 2019. Six weeks later, Cyclone Kenneth struck the country as one of the strongest cyclones to hit Africa on record. Credit: Emidio Jozine/AFP/Getty Images

Images of devastating storm damage and droughts around the world this year have been drawing attention to the risks of global warming, particularly to the world’s poorest people. Cutting emissions is critical to minimizing those risks, but a new report argues that the world needs to devote an equally urgent effort to adapting to the changes that are sure to come.

The report, released Tuesday by the Global Commission on Adaptation, argues that a drastic increase in investing in adaptation measures, such as early warning systems and resilient infrastructure, would not only avoid tremendous human suffering and economic losses, it would bring benefits that would outweigh the costs nearly four-to-one.

“For years we have seen adaptation frankly as the Cinderella of climate change, way behind mitigation,” said Christiana Figueres, former executive secretary of the United Nations Framework Convention on Climate Change and a member of the adaptation commission. “The message of this report is either we delay and pay or we plan and prosper.”

For example, the report says:

If nations fail to make these kinds of investments, the report warns of a “climate apartheid,” in which wealthy people can pay to protect themselves from rising seas and food shocks while the rest of the world suffers.

The Global Commission on Adaptation was launched last year by former United Nations Secretary-General Ban Ki-moon and is led by commissioners from several governments, international organizations and corporations. The co-chairs are Bill Gates, founder of Microsoft, and Kristalina Georgieva, chief executive of the World Bank.

The report comes as people in the Bahamas are still trying to respond to the scale of the damage and death toll from Hurricane Dorian, one of the strongest, longest-lasting named storms on record in the Atlantic Ocean.

Cities around the country and globe have begun taking steps to reduce the risks they face.

In the United States, New York has revamped some zoning and building codes with an eye to rising seas and more extreme weather, and has begun a project to help protect parts of lower Manhattan from storm surges. Voters in Miami approved a $400 million bond that would partly go to making the city more resilient. Norfolk, Virginia, which is particularly vulnerable to rising seas, is trying to become a laboratory for adaptation.

But this work is far short of what’s needed, experts say.

“We tend not to invest in resilience and climate adaptation efforts until after a disaster has happened, until a lot of the damage has been done,” said Rob Moore, a policy analyst at the Natural Resources Defense Council. This comes despite the well-documented fact that it is far cheaper to protect against a disaster than it is to rebuild after it occurs.

The report calls for investing nearly $2 trillion in infrastructure, early warning systems, more resilient agriculture, water resources and protecting mangroves, arguing those would yield about $7 trillion in benefits. Beyond simply avoiding losses, the report says, these investments can lead to economic growth by fostering innovation and providing greater security. Saving mangroves, it notes, can contribute to more productive fisheries and recreation while also protecting coastlines from storms and erosion.

Some of the biggest payback can come from early warning systems: $800 million spent in the developing world could prevent $3 billion to $16 billion in damage annually, the report says. Providing just 24 hours of warning for people to prepare before a storm hits can cut damages by 30 percent, it says.

The report gives the example of Bangladesh, which has built early-warning systems and shelters, strengthened buildings and built civic awareness to protect the low-lying nation from cyclones. The result has been a dramatic reduction in deaths and losses: While the country saw 300,000 people die in a cyclone in 1970, and 138,000 in 1991, a 2007 storm that came after much of this work resulted in far fewer deaths at about 3,360. One this year resulted in five deaths.

The report highlights a host of reasons why more investment is not already being made.

There’s a lack of understanding of the risks—many cities in developing nations do not have the type of floodplain maps that in the U.S. are issued by the Federal Emergency Management Agency.

In many cases, the report said, climate risks need to be assessed as an economic value before government ministers or investors will take action. Short-term thinking often undervalues future savings.

“These types of investments are things that pay off over the long term, not over a single election cycle,” Moore said.

But the report also says that a major challenge is that the people who make policy or financial investments are often among the most protected, secure people, so they may overlook the risks that more vulnerable people face.

Christina Chan, director of the climate resilience practice at the World Resources Institute and co-director of the commission, said one focus in the coming year will be trying to increase the amount of international financing that reaches the local level, and to try to help local people gain a better voice in how that money is directed.

Last week’s Democratic presidential candidates’ town hall on climate change also drew attention to adaptation needs and policy ideas in the U.S. When the candidates were asked what they would do to help the United States prepare for climate change, several said they would commit more funding to protect neighborhoods from rising seas and acknowledged that poor residents are particularly vulnerable.

Lois DeBacker, who runs the environment program at the Kresge Foundation, which funds resilience efforts in U.S. cities, said that while many of the obstacles identified in the report are well known, she’s encouraged to see such a high-level organization committed to raising the political profile of adaptation.

The commissioners have said they will launch a “year of action” at the United Nations Climate Action Summit later this month, during which they will work with finance ministers, governments and the private sector to improve planning and boost investment into adaptation.

Ban, the former UN secretary-general, said Monday that he wanted to try to overcome a sense that it is too late to protect people from the effects of climate change and from disasters like Hurricane Dorian.

“I’m here today to tell you that this is simply not true,” he said.