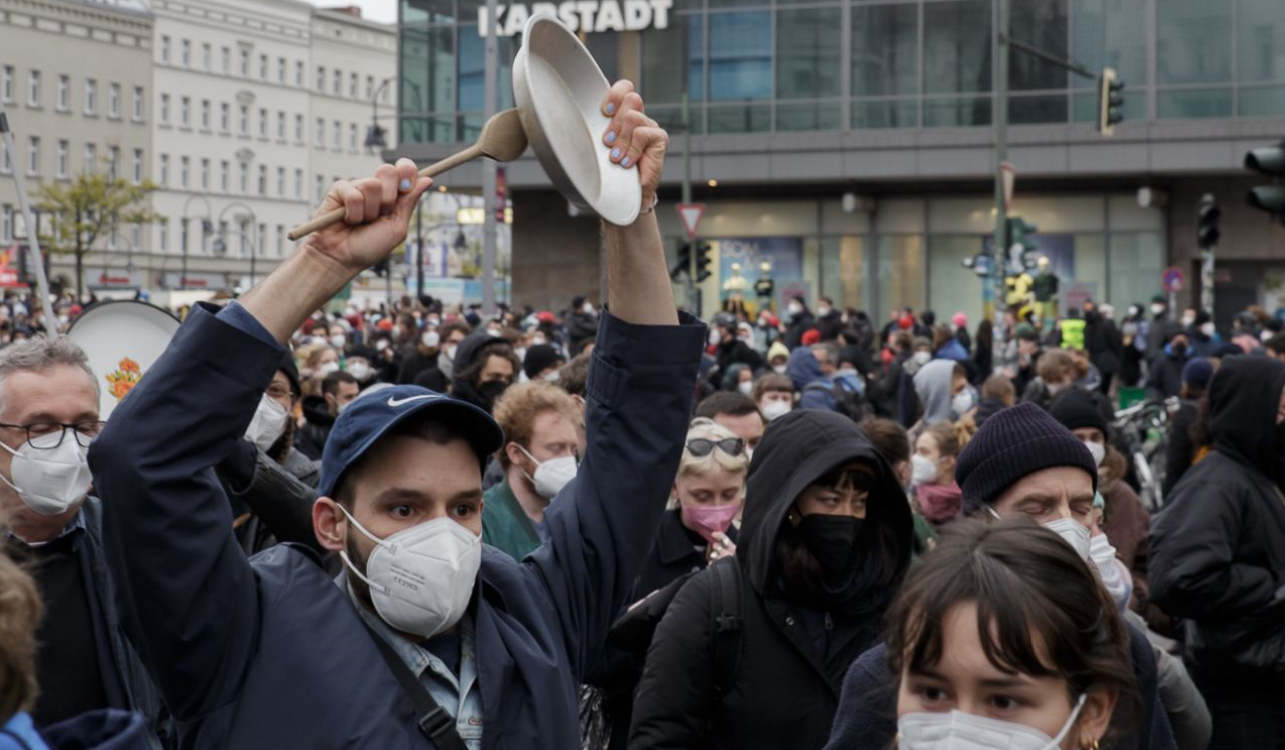 Above photo: Spontaneous demonstration on Hermannplatz in Berlin-Neukölln. @Montecruzfoto/Twitter.

The repeal of the Berlin “rent cap” by the Supreme Court means massive rent increases, arrears payments and poverty for hundreds of thousands of people. The ruling, which exacerbates homelessness amid the coronavirus crisis, has a signal effect for the whole of Germany and is emblematic of the inhuman enrichment policies of the ruling elites in Germany and Europe.

Balakrishnan Rajagopal, UN Special Rapporteur on the right to housing, spoke on Twitter on Thursday of a “deeply disturbing judgment” and, referring to the pandemic, warned, “The German government still has an international legal obligation to respect the right to housing vis-à-vis tenants.”

Despite the threat posed by COVID-19, more than 10,000 people took part in spontaneously organised protests that same day. In contrast to the state support regularly given to marches by right-wing extremists and coronavirus deniers, Berlin police violently broke up the peaceful main rally in front of Kottbusser Tor at 9 p.m. after only two speeches.

The riot police, dozens of whom were then deployed in full riot gear, used mace against demonstrators and physically injured at least one journalist who had identified himself as such. Other video footage documents a demonstrator lying on the ground being kicked by a police officer, who is then restrained by other police officers.

On social media, broad sections of workers and young people combined their anger about the social conditions in Berlin with a reckoning with the so-called Red-Red-Green senate (the state executive coalition of the Social Democrats, Left Party and Greens) and a determination to oppose capitalist exploitation and enrichment.

Typical of the mood is a viral Facebook entry by Ganden O. “(property company) Deutsche Wohnen earned more on the stock exchange today alone after the ruling than we poor tenants from the former GSW social housing provider have to pay back and can hardly manage, after the rent had already been raised three times in three years before.” The entire political establishment, from the Christian Democrats (CDU/CSU) to the Left Party, bears responsibility for this, he said.

Which party represents people like me in the autumn election? All parties have sold and betrayed us to Deutsche Wohnen.” While the governing parties were still “lining their pockets in times of need,” he wrote, “we are losing our homes.” “We citizens have a problem and only the choice between plague, cholera and syphilis.”

Reporters from the World Socialist Web Site and members of the International Youth and Students for Social Equality (IYSSE) spoke to tenants about the demand for the expropriation of all housing corporations without compensation and circulated the Socialist Equality Party (SGP) manifesto for the Bundestag (federal parliament) elections, which opposes the social inequality agenda of the establishment parties with a socialist perspective.

“I share a one-room flat of 30 square metres with my partner,” demonstrator Tamara, 37, said, who moved to Berlin from Italy 10 years ago. “We needed more space, but first he didn’t have enough money and now it affects me. Many of our friends are looking for a flat, for example, because they have become parents or are living in insecure conditions. A friend of mine has been looking for an affordable flat for two-and-a-half years. Everywhere you look there are only expensive flats. Meanwhile, more and more people are living in tents along the canal. It’s a sight that leaves me stunned in one of the richest countries in the world.”

Tamara, whose partner only found a new job in January, works as a freelance translator and has additionally been looking for work since February. “The court ruling means 100 euros more rent per month for each of us, which we also have to pay in arrears for the last year. For many others, it means 400 to 600 euros per month and thus a total of several thousand euros. We had hoped to finally be able to afford better accommodation.” This particularly affected young people from the working class, she said.

“Many who wanted to start a family, for example, have already rented more rooms, which they now have to pay extra for. We residents were not warned by politicians to put money aside. We now must pay for what they screwed up. Many young families, like students, will have to share their flats—and students themselves will not be able to afford to live here in the first place. It’s exasperating and, to me, emblematic of our bad government here in Berlin.”

That this development was also taking place amidst the devastation of the coronavirus pandemic “is a disaster,” Tamara said. “Many people have lost their jobs in the last year. The owners show no empathy for this. A friend received an email yesterday asking him to pay within seven days—although such a short deadline is illegal. In the last year, many owners have opted to sell—resulting in more flats going to the richest people. This crisis has undoubtedly made me even more aware of issues such as the right to housing, health and workers’ rights.”

Expropriating the rent sharks without compensation “would be a dream,” Tamara said. “You could use the ‘coronavirus effect’ and at the same time convert vacant offices, car parks and shopping centres in the city centre for social housing and other much-needed facilities. Housing is a fundamental right, and no profit should be made on basic housing.”

Tamara also thought that the movement to expropriate the real estate corporations should lead to a broader movement of the working class across Europe, which should also be directed against austerity, climate change, refugee-baiting and fascism: “Until the last homeless person in Europe has a roof over their head!”

“No one should have to live on the street or in a camp,” she said. “Until recently, I thought that my country of origin was much more corrupt than other European countries. Maybe that’s true, but every day I read about scandals everywhere, especially in Germany.” A “revolution” was, after all, “the logical consequence of what we are facing.”

The Sozialistische Gleichheitspartei (Socialist Equality Party) campaign for the federal elections is therefore timely. “The whole system is corrupt,” Tamara added. “Those who don’t want to put profits before lives don’t get to the top in it—I hope your candidates will disprove that rule!”

“I agree one hundred percent that the housing corporations have to be expropriated,” said fellow demonstrator Constance. She came to Berlin two years ago as a refugee from Chicago after being a victim of targeted police violence in the US. “I have had to fight the threat of homelessness myself throughout my life,” she said.

“After I came here, I lived in a refugee hostel for two years, where I was abused several times. The rent of the public flat I live in now is currently paid [from public funds] but from now on it will cost the taxpaying people of Berlin 250 euros more. I would prefer to earn my own money, but with my handicap, I have no chance on the labour market. The rent cap would have allowed me to make my own decisions and finance my rent myself through further education. Thousands in Berlin are in a similar situation to me.

“How many people in Berlin have been harmed or died because they don’t have a safe shelter? And why? Just so the owners of the real estate companies can buy themselves a new Tesla? There must be an end to putting profits before lives. That’s what this is really about.”

“The cause of socialism and affordable rents is very close to my heart,” Constance said. “The motto should be: ‘From each according to his ability, to each according to his need!’ If socialist policies had been followed, we wouldn’t have this crisis now. When our human rights are traded as a commodity, decisions are not made for the good of all.” Instead—as in the case of “Deutsche Wohnen und Konsorten”—they speculate on future profits by leaving flats empty. “They don’t mind because they have such a large financial backing. Expropriation would put the responsibility back into our own hands.”