Above Photo: Protesters next to trees felled in the Hambach forest before a demonstration calling for the forest to be saved and the government to outlaw lignite as an energy source. Photograph: Michael Gottschalk/Getty Images

Ecosia offers to buy remaining forest from energy firm RWE, which plans to fell most of the trees

A non-profit Berlin tech startup has offered to buy the remaining 200 hectares of an ancient German forest to save it from being destroyed for coal surface mining.

Ecosia, a search engine which donates the majority of its advertising revenue to conservation initiatives and funded the planting of almost 40m trees across the world, has approached the energy firm RWE with an offer of €1m (£877,000) to secure the final stretch of the 12,000-year-old Hambach forest in the western state of North Rhine-Westphalia.

“We think that a fair reconciliation of interests can be found between RWE and the people, and with our commitment to buy the remaining stretch, are pursuing the ecological and societal interests of those who have committed themselves to protecting the forest and dedicated themselves to nature conservation,” Christian Kroll, Ecosia’s CEO, wrote to the head of RWE, Rolf Martin Schmitz.

Ecosia’s offer was unsolicited. RWE had not sought a buyer for the land, which is believed to have been bought in the 1970s for the equivalent of about €500,000 in today’s money. 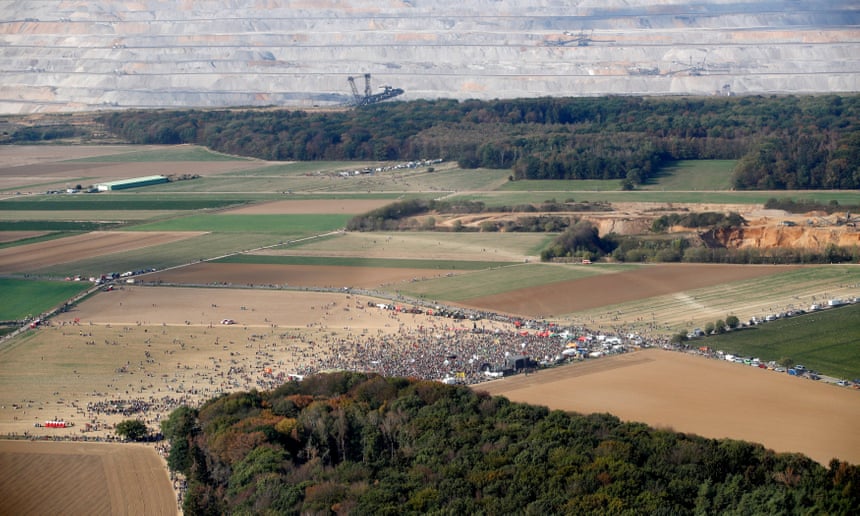 Protesters against the destruction of the forest with the current open cast mine in the background. Photograph: Wolfgang Rattay/Reuters

RWE has plans to cut down the majority of the forest, located close to Aachen, which activists have been fighting for years to save, with many holding out in fortress-style treehouses. In recent weeks tensions have heightened as thousands of protesters and police have confronted each other in lengthy standoffs and scores of treehouses have been destroyed. In one confrontation a journalist died after falling from a treehouse.

About 50,000 demonstrators gathered in the forest for peaceful protests at the weekend, calling for it to be saved, and for the government to outlaw lignite, which is also known as brown coal, as an energy source and to accelerate its plans to phase out the country’s dependence on coal.

Conservationists have urged a rethink of the country’s energy strategy, pointing out that energy companies are making huge profits – from an estimated €1.8bn in revenue – by exporting about 80 terawatts of energy to neighbouring countries. 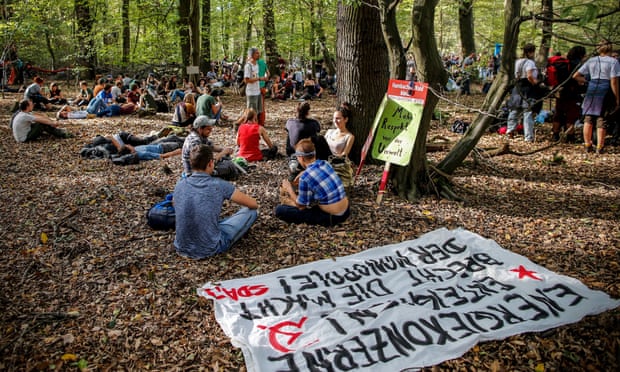 Protests against the mine. Photograph: Thomas Banneyer/EPA

Kroll, who founded Ecosia in 2009, said his company had wanted to use the window of opportunity to place its bid, and was keen to stress it was not motivated by publicity.

“Last year for the first time, Germany produced more renewable energy than brown coal energy, and this is the direction we need to keep working towards,” Kroll said. “There is a momentum here that we do not want to see lost and we invite other companies and organisations to join us in our offer for the Hambach forest.”

Pieter van Midwoud, Ecosia’s tree-planting officer, highlighted the unusual nature of the Hambach forest, a broadleaf forest which used to typify most of Germany’s woodland but is now rarely seen. “Some of the trees in the Hambach forest are 350 years old and it is home to 13 endangered species,” Van Midwoud added.

RWE failed to respond to the startup’s offer by Tuesday afternoon.