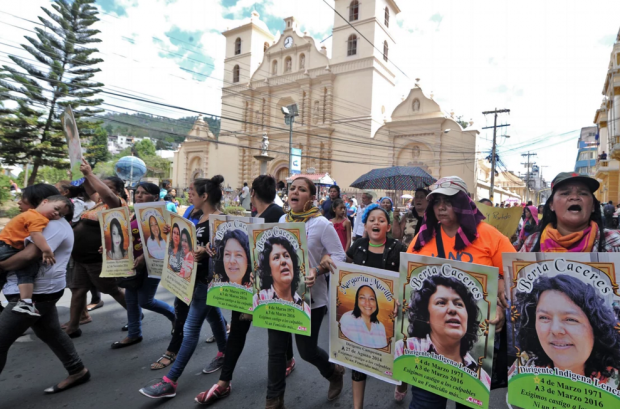 Officials in Honduras have refused to allow the only witness to the murder of environmental activist Berta Cáceres to leave the country and return to his native Mexico.

Gustavo Castro Soto, coordinator of Friends of the Earth Mexico and director of the NGO Otros Mundos, was shot twice during the attack on Cáceres on Thursday morning, and only survived by playing dead.

Officials are treating him as a protected witness, according to the Associated Press, but activists say that the Honduran attorney general’s office has issued a 30-day immigration alert against him, preventing him from leaving the country.

In a statement on Tuesday, Otros Mundos and Friends of the Earth Mexico said the order was “unjust and unnecessary” as Castro has “provided sufficient information to prosecutors to clarify the facts of the case [and] has not been informed what procedures remain outstanding”.

“Gustavo Castro is not being treated as a victim of an assassination attempt, instead his life is being put at risk, along with his right to free movement.” The statement said that when Castro attempted to catch a flight out of the country on Sunday, he was stopped at the immigration desk of the Tegucigalpa airport and refused permission to proceed to his gate.

President Juan Orlando Hernández has said the investigation into the attack was proceeding with US assistance. The Honduras prosecutor’s office did not respond to an interview request.

Cáceres, who won the 2015 Goldman Environmental Prize, was murdered by unknown assailants on 3 March in the western Honduras town of La Esperanza, where she led a movement to stop a dam being built without consulting the indigenous Lenca population.

Authorities say she was shot four times, though they initially attributed the attack to a robbery – an explanation rejected by Cáceres’s friends and family, who say she endured death threats from landowners, police and the army.

Cáceres’s nephew, Silvio Carrillo, said that Soto was not allowed to sleep or change out of his bloodied clothes after the attack. “The treatment [Castro] received for three days was tantamount to abuse,” he said.

In an open letter published by Honduran newspapers, Castro alleged the crime scene was altered, while he was only offered medical attention three days after the attack.

“I did not hear cars arriving or leaving when the murder was committed; the crime scene was modified and altered,” Castro wrote. “They sent the majority of the people from Copinh” – the organisation Cáceres founded in 1993 – “to give statements and not the suspects.”

Castro added that investigators asked him to review pictures to identify possible suspects, “But I regret that all the videos and photographs were from Copinh marches.”