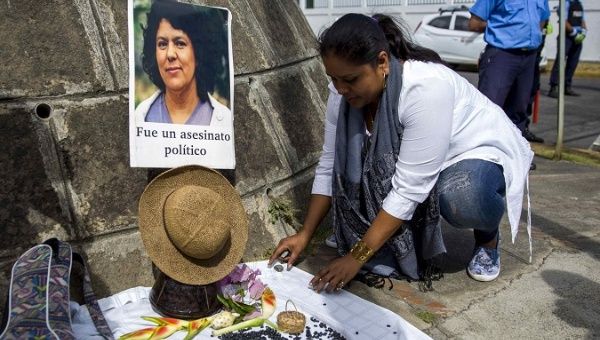 Above Photo: A woman places an offering in memoriam of Berta Caceres in one of the many international events honoring the environmental activist. Managua, Nicaragua. March 2, 2017. | Photo: EFE

The plaintiff team had delayed the process demanding the inclusion of key-evidence they claim, the Public Ministry is withholding.

The long-awaited trial against eight people accused of killing the Honduran feminist, and environmental activist Berta Caceres in 2016, started at 9 a.m. on Saturday after being postponed several times and without her family’s private attorneys, as informed by the Public Ministry (MP).

The oral hearing was programmed for Friday but it was delayed as Caceres’s family filed another appeal against three of the participant judges, whom they accuse of refusing to demand pertinent evidence from the MP.

The plaintiff team claims the MP is withholding key evidence, such as digital documents they got from the raids on the accused homes, in order to protect high level staff from the Energetic Development (DESA) company.

The MP has declared its innocence, and argue the evidence presented will be enough to declare the accused, guilty. The private plaintiff’s team was left outside for “refusing to collaborate” and the case will be taken by the MP representing “the interests of society in general.”

The decision of the tribunal, supported by the defending team and the MP, was celebrated by Ritza Antunez, attorney of one of the accused, who blamed her counterparts for delaying the process.

“The scientific evidence and other investigative information collected by the Criminal Investigation Technical Agency will play a key role, so the Special Prosecuting Office for Crimes Against Life can rule a guilt sentence,” the MP said in a statement.

Caceres, an indigenous Lenca, fought for years against the construction of the Agua Zarca hydroelectric plant on the Gualcarque River, a project led by DESA. She opposed the project denouncing environmental damage and other negative effects on the local Lenca people.

They’re all accused of murdering Caceres and of a murder attempt on the Mexican environmental activist Gustavo Castro, who was visiting her house at the time of the crime. Castro was wounded by a bullet and is the only witness of the murder.

The prosecuting team will do their job to “show the responsibility of every suspect in the accused crime, using more than 100 items of evidence, including analysis and ballistic tests on the weapon using to take away the life of the environmentalist,” declared the MP.

The MP also announced the investigation will try to determine if more people were responsible for planning or committing the crime.

The case has been widely controversial due to several irregularities denounced by plaintiffs and human rights organizations.

“We have prepared a solid argumentation line,” said Ariel Madrid, from the prosecuting team, before the trial was postponed again on mid-September “but with the evidence that has been admitted into the process, it will be difficult to hold.”

By the end of September, the Court of Appeals of Honduras ratified pre-trial prison for investigator Juan Carlos Cruz and ex-policeman Miguel Arcangel Rosales, accused of presenting fake evidence and destroying documents in order to deviate the investigation.

The CEO of DESA, Roberto David Castillo, is also in detention accused of ordering the crime in alliance with State security forces, and is facing a case in its own.

Caceres’s activism earned her the prestigious Goldman prize. She was murdered on March 3, 2016, having previously denounced threats by DESA. She was 42 years old.