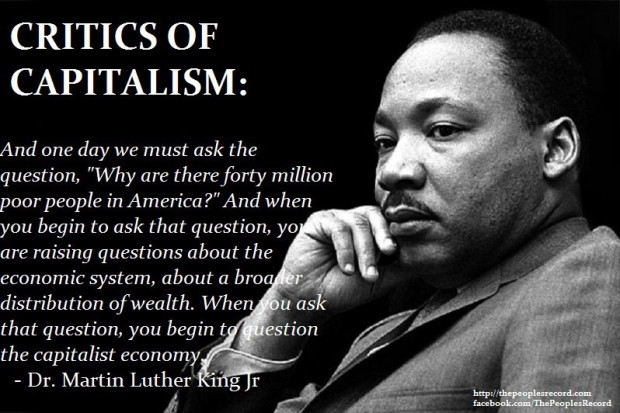 Beyond Capitalism: A Revolution Of Values

Note: We are republishing this article for Dr. King’s birthday in 2016, but it is also being republished on the day the President Dwight D. Eisenhower made his 1961 farewell address to the nation when he warned against militarism undermining the economy and safety net of the United States. Both King and Eisenhower warned that ongoing spending on preparation for war undermined the values of the nation and warned that we must stop it.

Martin Luther King, Jr.’s most revolutionary 1967 speech “Beyond Vietnam: A Time to Break Silence” marked his movement, from civil rights to a critique of capitalism, a year before he died.

Looking “beyond Vietnam,” King questioned a US policy of interventions in foreign countries to defeat not only “Communist tyranny,” but any opposition to the corporate-capitalist system of imperialism and oppression that protects corporate interests and the wealth and power of the ruling classes. “When machines and computers, profit motives and property rights are considered more important than people,” he said, “the giant triplets of racism, extreme materialism, and militarism are incapable of being conquered.”

He called for a “revolution of values,” a shift from a “thing-oriented” society to a “person-oriented” society. King envisioned “a worldwide fellowship that lifts neighborly concern beyond one’s tribe, race, class, and nation.” He cautioned: “a nation that continues year after year to spend more money on military defense than on programs of social uplift is approaching spiritual death.”

While “spiritual death” may be true for today’s ruling, corporate and military elite, there is a vibrant spirit in the global ecojustice movement, which is calling for a revolution in values to rectify the climate and ecological crises as a matter of life over death.

Today’s US ecojustice movement has rejected the regulatory approach of the traditional environmental movement that “permits” corporate harm to people’s health and the environment. It includes the 1980s environmental justice focus on race and class that criticized siting toxic dumps, incinerators, and factories in low-income and minority communities.

The ecojustice movement advocates that solutions to climate change can not be only technical (the reduction of atmospheric concentrations of CO2), but must replace the economic system King deplored with a system based on human rights, equity and democratic participation.

The values of this new economic system are embodied in the concept of “living well” adopted in the new 2009 Bolivian Constitution and the “People’s Accord” of the World People’s Conference on Climate Change and the Rights of Mother Earth (Bolivia, April 2009).

The “Declaration” adopted by the Ecojustice People’s Movement Assembly at the US Social Forum, June 25, states:

“We support the conclusion that only by ‘living well,’ in harmony with each other and with Mother Earth, rather than ‘living better,’ based on an economic system of unlimited growth, dominance and exploitation, will the people of this planet not only survive but thrive.”

We realize that our global climate and local neighborhoods are both important parts of “the commons” and a vital part of our natural world. Recognizing and reclaiming our “commons” is fundamental to King’s revolution in values and the ecojustice movement’s call for “living well.”

It is not just the climate and ecological crisis that brings new focus to the concept of “the commons” as it applies to nature. At this stage of globalization, when corporate CEOs and others want to commodify, privatize and profit from almost every aspect of nature and cultural creation, people are asking: What should be part of “the commons”?

There is a long legal and cultural history concerning what aspects of nature are considered public or private property or “held in common” for common use. We must ask ourselves: “What legal and other strategies can we use to “reclaim” the commons that have been “enclosed” or taken for private use by corporations and the wealthy for profit? How do we return these “commons”—for example oil fields, forests, and water resources—to the public, while conserving them for future generations? What principles apply to the use, the sharing, or the distribution of income from “the commons”?

These are all aspects to consider as we undertake a non-violent revolution of values to move beyond capitalism.

Nancy Price is the Co-Chair of the Alliance for Democracy and Western Coordinator of AfD’s Defending Water for Life Campaign.