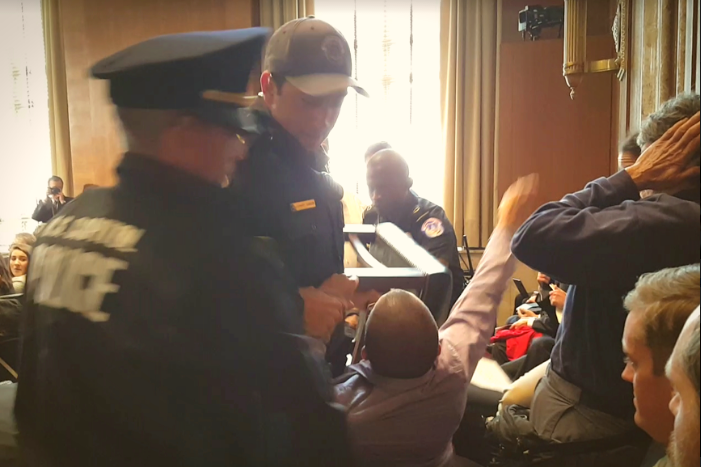 WASHINGTON, DC – Once accustomed to operating in the shadows, controversy around the Federal Energy Regulatory Commission (FERC) and its role in the permitting of harmful and unnecessary fracked gas infrastructure was thrown into the limelight on Thursday morning when five people disrupted the Senate Energy and Natural Resources Committee’s confirmation hearing for President Trump’s nominations to the Commission, causing delay while speakers tried to proceed.

After the hearing was called to order, and introductions occurred, protesters methodically, yet unpredictably, loudly exclaimed  “FERC hurts families, Shut FERC down!” and “FERC hurts families, FERC hurt towns” and “The future is watching”. One protester said “I am compelled to interrupt this because I have seen the damage of climate change”. The protesters were ejected, four arrested and one detained. FERC has been debilitated since January when Commissioner Norman Bay resigned and left the Commission without the quorum of three it needs to issue permits. Protesters also spoke out: “FERC is killing Pennsylvanians.”

The disrupters represent a coalition of more than 160 organizations that have pledged to fight Trump’s nominations to FERC. Their message is simple: Until Congress investigates the agency’s abuses of power and law, the Senate must not approve new FERC Commissioners. Until now, their opposition has come in the form of call-in’s, letter-writing campaigns, and lobby days focused on educating the Senators and pressuring Senators to vote against all of Trump’s FERC nominees.

The coalition has extensive documentation of FERC’s abuses of power and law and has presented it to the Senators over the last few months. Thursday’s action marked an escalation in the campaign. In addition to delaying a restoration of FERC’s quorum for as long as possible, the action was meant to show the increasingly potent political consequences if the Senate allows FERC to continue hurting communities, the environment, and global climate.

“FERC is an arm of the oil and gas industries,” said Lee Stewart, an organizer with Beyond Extreme Energy and one of those arrested in the hearing room. “Their rubber-stamping of fracked gas permits disregards the harms such projects inflict on communities, towns, and the climate. Because of the great violence FERC inflicts on the world, it’s important to do everything possible to stop or delay them. Until FERC is replaced with an agency dedicated to a just transition off fossil fuels and to an exploitation-free energy system based on localized, renewable energy, business as usual is unacceptable.”

Randy Fenstermacher, of Cambridge, Massachusetts, said “history will show that the oil crisis of the 1970’s led to the evolution of FERC in its current state, and pales in comparison to abrupt global climate change already underway.  We need a new organization of the energy sector.  To Congress, we say, “Don’t nominate, innovate.”  “FERC is not positioned to transition to renewable, non-exploitative systems of localized energy generation.”