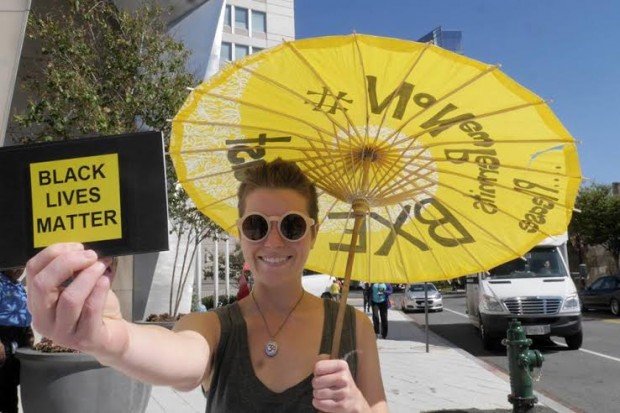 Above: Sean Glenn, a “No New Permits” faster at FERC holds a Black Lives Matter sign. All photos by Tom Jefferson.

The portly man hustled out of the steely faced portal to glare at us. He was brandishing the flyer I handed him earlier.

“All lives matter,” he huffed, before turning on his heels and disappearing back through the glass doors.

I looked down and shook my head. I shouldn’t have been surprised.

A woman came around the corner of the same building. As many others in DC during early morning rush hour, she was in a hurry to get to work. I extended my arm and held out a flyer printed on cardstock paper.

“Good morning,” I said as she approached. “Can I offer you a flyer?”

It didn’t look like she was going to take it. We’d been flyering for a week, so she couldn’t be bothered. Only today was a special day, and we had a different flyer. It caught her eye, and she reconsidered. She took it from my hand and studied the back.

“Thanks for doing this,” she said with a smile, as she too disappeared into the cold, sterile entrance. My heart was racing at this point. For one, I was baffled by the stark difference between the two responses I just experienced. Mostly, however, I was exhausted from lack of food and nutrients. It was my seventh day going on water and salt alone, my only true sustenance being the community of 11 other fasters, as well as responses from people like the lady who smiled. Today was long in the making. I reflected on the meeting I attended with a fellow member of Beyond Extreme Energy a few months back, at the Potter’s House, a café, bookstore, and community space that has been in Adams Morgan since the 60’s. A group of folks from around the city gathered there in late July for the first meeting of the Black Lives Matter Spokescouncil, which I learned about on the Washington Peace Center website.

“This is an open meeting for all affinity groups, solidarity groups, established organizations, unions or religious communities who want to stand in solidarity with the Black Lives Matter Movement,” the website said, followed by an explanation of two proposed weeks of action to collectively address and confront white supremacy in DC.

Among the spokescouncil goals listed on the website were “support Black leadership of the Black Lives Matter movement”, “create democratic and cooperative space to coordinate Black Lives Matter events, actions, and strategy”, and “work together to create avenues for formerly inactive Black people and allies to become participants and leaders in the movement locally.”

The website also listed the goals of the first week of action.

1.) To call people in and provide spaces and opportunities for previously inactive people to get involved. 2.) To provide an initial project for the spokes council to coalesce around. 3.) To provide an opportunity to increase strategic cooperation between organizations doing the work in order to increase proactive nature of organizing and increase impact. The group I’m in, Beyond Extreme Energy, which focuses on climate change and fracking infrastructure, is working on a set of principles that incorporates anti-oppression work into the core of what we do. One responsibility added to those expected of organizers, for example, is to “help maintain Beyond Extreme Energy’s active role in the broader struggle for collective liberation to which the realization of our mission is inextricably tied.”

The first week of action outlined above was to take place during the first week of September, when we’d be in the midst our 18 day water-only fast for no new fossil fuel infrastructure permits at the Federal Energy Regulatory Commission (FERC), the captive federal agency that rubber stamps fracked gas infrastructure projects all around the country. It was the steely building I referenced earlier, nestled behind Union Station.

Here are the flyers we handed out.

“I had my questions about how our Beyond Extreme Energy-Black Lives Matter support day would go, but it seemed to go very well,” said Ted Glick of New Jersey, one of the 18-day fasters.

“It felt so good to be expressing our solidarity,” added Ellen Barfield of Maryland, another faster.

“We got a couple of hostile comments from older white guys, like ‘what do you mean? There are white people being killed by blacks. Why aren’t you talking about that?’ The guy looked like he wanted to assault me, but didn’t,” said Steven Norris of North Carolina, also a faster. “And another guy yelled at Melinda who was not blocking him at all, ‘Get out of my way or I’ll hurt you.’ FERC employees have been ordered not to talk to us, so we got many of the usual blank stares at the doorway when we attempted to hand them fliers. Some people seemed moved that we are doing this fast day-after-day, and showing up with friendly faces.”

Faster Jerome Wagner of New Jersey also reflected on his experience. “For me, it felt a bit awkward but generally good to do the flyering that we did in front of FERC. For one thing, it underscored that I am only a beginner in appreciating deeper aspects of racism in America. On the other hand, I am able to connect the subjugation represented by slavery and other racist practices with the environmental damage that we confront. I had one Hispanic man respond ‘all lives matter.’ Sure – on a philosophical and ideal level. However, it is black people who have been killed recently by the aggressive police forces which protect the interests of white people – that is the practical and urgent situation that BLM confronts.”

There’s one comment I’ll probably take with me for a long time. A woman of color passed by and told me she didn’t like what we were doing. She said we were using Black Lives Matter to serve our own agenda.

What does it mean to organize in a way that reflects the inextricable connection between the struggle for climate justice and the broader struggle for collective liberation? It certainly means more than participating in days of solidarity, or even joining the Black Lives Matter Spokescouncil.

To go without eating has been painful, but out here on the sidewalk, fruitful relationships have been fostered. With racism still clinging to the hearts of white folks in Beyond Extreme Energy and across the climate justice movement in North America, to embrace in word and deed the centrality of collective liberation, especially the struggle for Black Lives Matter, will be painful also, but that pain too must be fruitful.