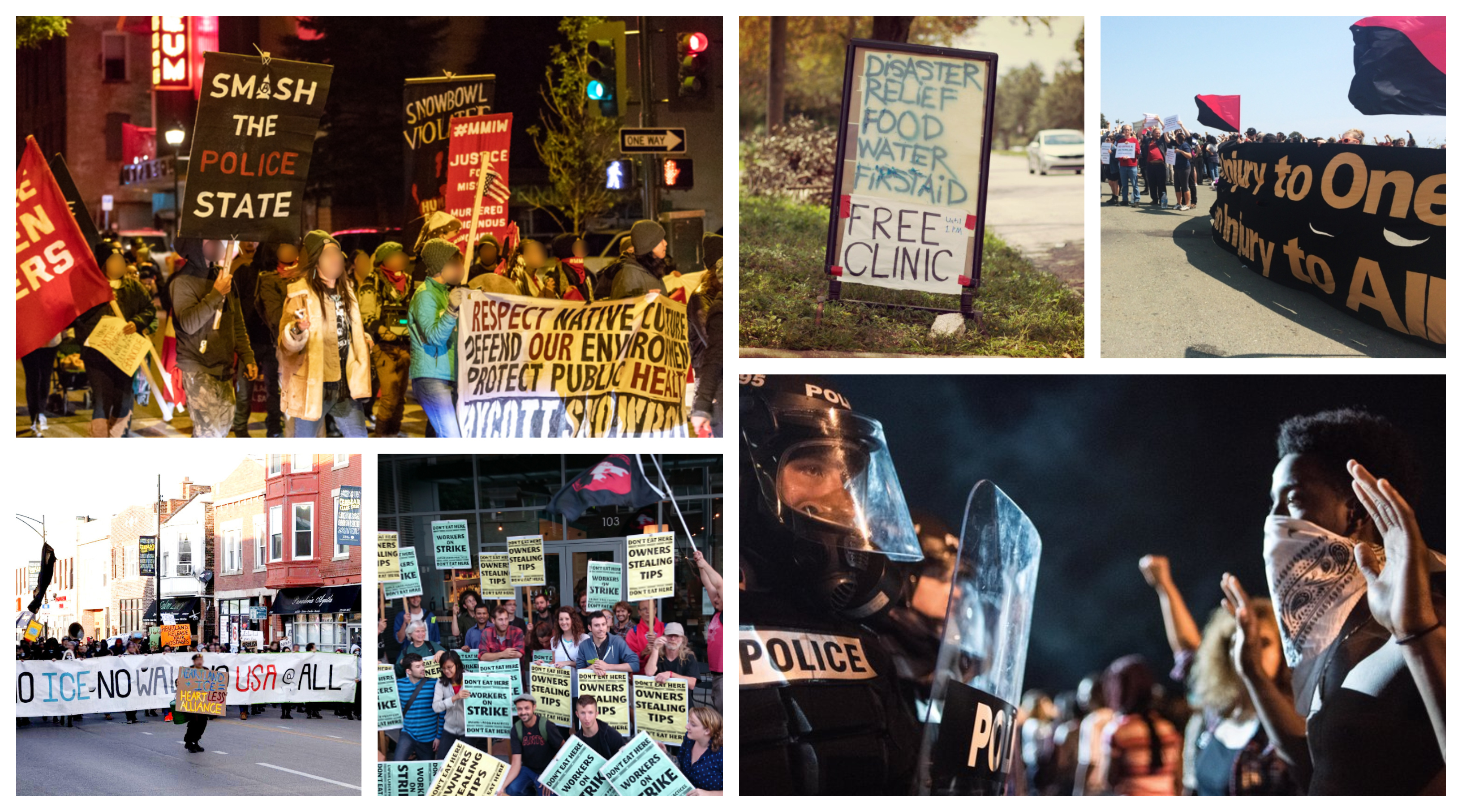 Beyond Mobilizing: Towards A Movement That Builds A Base For Power

This Essay Argues That Anarchists And Autonomous Anti-Capitalists Need To Advance Beyond Simply Mobilizing And Focus On Building A Base Of Popular Support Within Wider Communities In Order To Engage In Mass Organizing As A Means Of Building Capacity And Support For Our Ideas And Action.

As I wrote not long ago, the North American anarchist movement has reached a crossroads. The movement must decide whether it will continue to remain a relatively isolated subculture or broaden its horizons and reach out to new groups of the oppressed. In short, I argued that the movement must turn its focus to mass organizing or risk becoming a marginal force in the political struggles to come. But what exactly would such a shift look like, and how would an organizing movement operate in practice?

To begin, we have to understand what organizing actually is. Much of what has historically been referred to as ‘organizing’ by the American left simply is not. Tapping into an existing network of friends, reaching out to our followers via Twitter and Facebook, and so on is mobilizing, not organizing. Mobilizing is when we marshal those who are already committed to a cause to take some action as part of a larger effort. Mobilization absolutely has a role to play in our struggle. But, over the long run, mobilization fails to build our power because it relies on the same small group of activists.

“Mobilization Absolutely Has A Role To Play In Our Struggle. But, Over The Long Run, Mobilization Fails To Build Our Power Because It Relies On The Same Small Group Of Activists.”

Organizing, by contrast, is deliberately reaching out to and building relationships with the unorganized. Organizing begins when a group of people face a collective problem: their landlord is raising their rent, they are exploited at work, they are being brutalized by prison guards, their planet is being destroyed by capitalism. Some may identify and understand the problem, others may only be partially aware of it. The organizer’s task is to have conversations with many of the other people in this group, showing them how important it is that they come together and fight to change their situation. The organizer must overcome the fact that many of the people they talk to will be afraid of the real consequences that could come with taking action. The organizer helps their comrades-to-be overcome their fear and apathy and choose to fight back. The organizer must then bring these people together to form a collective unit and help move that unit to act against the injustice it is facing.

It should go without saying that organizing the unorganized is more difficult than mobilizing those who are already organized. But this kind of organizing is the only way to deliberately grow our movement, build a mass base, and create the connections with the rest of our class that will allow us to actually transform our society. A movement that does not systematically try to build itself in this fashion will never have the strength to push for revolutionary change. And there is presently no broad section of the American left that systematically focuses its efforts on mass organizing. While this is a serious present deficiency, it also means that there is a large gap to be filled by the first effective and attractive movement that chooses to do so.

How an Organizing Movement Operates

An organizing movement is made up of organizers who dedicate their time to building resistance organizations among the oppressed. The organizing movement recognizes that the only viable path to revolution is to build up the strength and confidence of our class by creating strong networks in workplaces, neighborhoods, prisons, and so on. Therefore, the organizing movement must do two main things if it wishes to grow:

It follows that an organizing movement needs to be respected by a broad section of the oppressed, not just a small collection of activists. An organizing movement must therefore look like, base itself in, and recruit from the working class and oppressed communities in its area. By basing its activities in the actual social base of a particular area, the organizing movement is able to tap into organic social networks and mobilize much larger numbers of people for struggle. This means that the movement must be welcoming, open, and willing to work with a broad range of people at different levels of political consciousness. Everyone will not come to the movement as a perfect revolutionary – experience with struggle and solidarity will help create the kind of consciousness we hope to spread.

“The Organizing Movement Recognizes That The Only Viable Path To Revolution Is To Build Up The Strength And Confidence Of Our Class By Creating Strong Networks In Workplaces, Neighborhoods, Prisons, And So On.”

To reiterate more bluntly: an organizing movement is not a small group of mostly-white anarchists surrounded by a majority-black and latinx community, or even a small group of middle-class white kids surrounded by a working-class white community. The movement must obviously begin with the resources and people it has at its disposal. But an organizing movement strives to immediately build its connections with the oppressed and turn itself into an extension of that community.

To effectively recruit and train new revolutionary organizers, an organizing movement should itself be effectively organized. In our context, this means that there should be a federated structure of organizing groups that shares information and resources, conducts regional and national campaigns, and deliberately expands itself to new areas. The job of the organizing organization is to turn the collected skills and capacity of its members into drives to create organized resistance bodies – radical unions, tenant unions, self-defense groups, etc. – within our class.

If such an organization is to succeed at the aims outlined above, it needs to be made up of the most dedicated and serious activists who are willing to put in the work to do so. An organizing organization thus has to proceed by recruiting the best candidates from the existing movement and from the broad base of the oppressed. Those doing the recruitment need to ask themselves honest questions about prospective recruits: Are they willing to be taught how to organize? Do they really want to fight? Are they emotionally invested in the movement for the right reasons? Are they willing to do whatever it takes? If the answers to these questions are not a clear yes, the candidate is probably not the right fit for the organization.

“If We Want Riot And Insurrection To Transform Themselves Into Full-Blown Revolution, We Need Organized Strength, A Mass Base, Self-Discipline, And Experience.”

An effective revolutionary organization cannot be willed out of thin air. It has to be created by dedicated revolutionaries who have experience in the movement and are willing to bring the struggle to a higher level. Thankfully, there are plenty of movement veterans (often collected in small groups of friends) scattered throughout North America. The open question is whether we recognize the need for a change in the way we operate, and whether we are willing to come together and start trying something new.

Make no mistake: a revolutionary mass movement is viable, even in the United States. A new cycle of struggle is being inaugurated by insurrections across the world. Capitalism grows more unbearable with each passing year. The movement that fills the present gap by systematically organizing the oppressed stands to have many opportunities to fight for radical change in the coming years. But if we want riot and insurrection to transform themselves into full-blown revolution, we need organized strength, a mass base, self-discipline, and experience. And those things are only possible if today’s anarchist movement decides to become a revolutionary organizing movement.