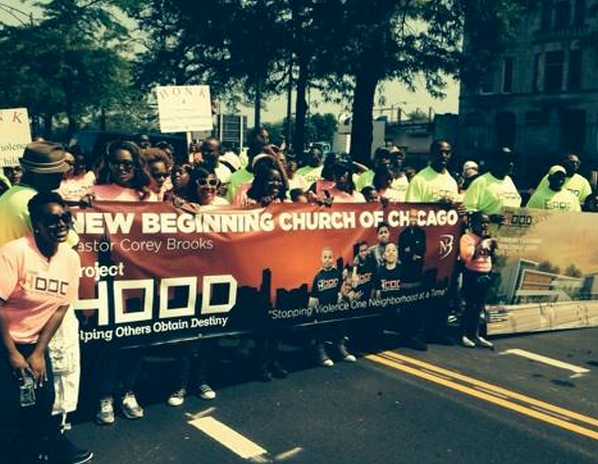 Beyond Police, Chicago Residents Band Together To Curb Street Violence

Every Saturday afternoon Ms. Judy waits on the streets of Chicago’s South Side for the women of Sisters on the Street to pray with her. And when some of the sisters show up late, she notices. “There’s 15 of us, if we’re not there by 11:30, she’ll walk up to each one and say ‘You’re late. You’re late. You’re late today,’” recalled shift leader Tasha Thompson.

Forty-one-year-old Ms. Judy is a mother and a streetwalker who suffers from substance abuse and is involved in sex work. She is one of the many people Rev. Corey Brooks of New Beginnings Church in Chicago hopes to touch through his initiative “Brothers on the Block, Sisters on the Street,” which seeks to end violence on the streets of Chicago.

As a highly segregated and economically unequal city, Chicago has long had high rates of violence, particularly in the neighborhoods with the most poverty and least access to resources. While the city government has responded to the violence by increasing the presence of police, many community members like Brooks have sought ways to deescalate the violence without involving the police or the criminal justice system.

Earlier this year, Brooks spoke with other Chicago residents on his radio station and quickly realized he was not the only one that desired change in Chicago. Thus, the community-led initiative was born as part of the church’s broader Project Help Others Obtain Destiny campaign, known as Project HOOD. By the beginning of the summer, the initiative had accumulated 150 core volunteers. Male volunteers walk the blocks of the south, east and west side neighborhoods during three-hour shifts every Friday from 6 to 9 p.m. and from 9 p.m. to midnight. Female volunteers work as mentors on the streets Saturday afternoons from noon to 3 p.m.

Chicago resident Alvin Rider, field manager of the initiative, has witnessed a change in the attitudes of his fellow Chicagoans throughout the course of the initiative this summer. As he accompanied volunteers on the street, he noticed people voluntarily sharing their experiences with violence — a type of spontaneous storytelling that has helped build community and trust.

Chris Harlan is also a shift leader for his group that walks the blocks every Friday evening. As a member of New Beginning Church, Harlan has been following Rev. Brooks’ programs since the summer of 2013. As he explains, the initial model of the initiative started out with solely praying but now has advanced to providing resources. He believes that the move to take more action against the problems on the street is a promising one. As Harlan and his group travel a three-block square on the east side of Chicago, they have learned through their interactions that gun violence is far from the only problem on the streets. In response, during their rounds the group informs citizens about health care programs, shelters and job opportunities. “The majority of the people just need a resource to get them to get going,” he said.

While the groups make an effort have their presence known on the blocks, not everyone is convinced. Harlan described how some people question whether this was a genuine attempt to create change. To him, reactions from such cynics show why it is important for volunteers not to act as if they are extensions of law enforcement but rather as what they are: community members looking to improve their neighborhoods. “The community already has apprehension with law enforcement, so if you’re seen as an agent there of, my willingness to come and talk to you will be temperate,” Harlan said.

Whenever Harlan’s family worries about his safety, he reassures his family about the benefits of walking the blocks. He tells his children that he is doing it for them — so that they are safe when they go to the store or when they hang out with friends.

Safety is not the only force driving volunteers to act on the streets. Tasha Thompson felt she was doing this for a higher purpose. “I’m a faith walker and I just walk by faith,” she said. “I believe that God had called me home to Chicago to do volunteer work as opposed to things I was doing in corporate America.”

Prior to the program, Thompson worked as a vice president of financial aid for a management company. Now Thompson leads a group that covers a few blocks on the south side of Chicago. She explains that she finds it rewarding when she is able to create connections with others. “For every person that I’ve been talking with, I did something. The interaction was powerful,” said Thompson. “I did something to change something in their life.”

According to Rider and other volunteers, the initiative is helping decrease the violence in specific neighborhoods. Its consistency has also created a sense of trust and accountability — both among regular volunteers and members of the broader community. Every weekend, for example, the “sisters” gather to listen to Ms. Judy gain confidence to handle her situation, and she notices if they are late. Harlan also describes how a young man reached out to his group for an opportunity to pursue music. After connecting him to a possible opportunity, Harlan did not see him for a month. When the group later bumped into the young boy, he was surprised to see that they still showed up every weekend. This moment reminded Harlan of a saying his father would use during his public speeches: “People don’t care how much you know until they know how much you care,” he said. “When you show people how much you care, then they move.”

Currently the program is done for the summer and staff members are debriefing on the effectiveness of the program. Although the “Brothers” and “Sisters” will be gone for a couple of weeks, many are positive that they will continue to serve on the streets.