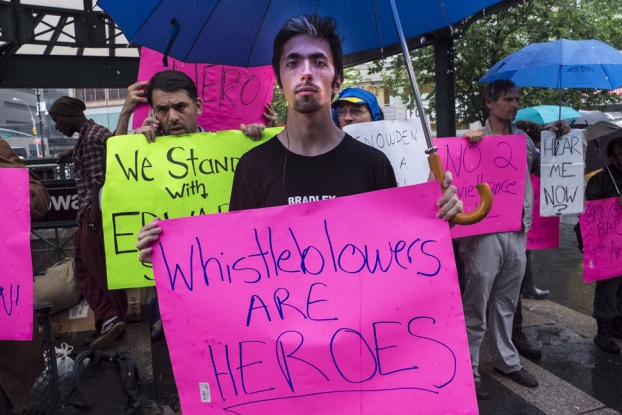 A new organization for whistleblowing will launch on Wednesday morning when the ExposeFacts.org website goes live and the group begins its first day with a news conference at the National Press Club in Washington. Its website will feature a whistleblower submission system known as “SecureDrop.”

NSA whistleblowers William Binney and J. Kirk Wiebe will speak at the news conference along with EPA whistleblower Marsha Coleman-Adebayo and journalist Barbara Ehrenreich, a member of the ExposeFacts editorial board.

The new organization, ExposeFacts.org, “aims to shed light on concealed activities that are relevant to human rights, corporate malfeasance, the environment, civil liberties and war. At a time when key provisions of the First, Fourth and Fifth Amendments are under assault, we are standing up for a free press, privacy, transparency and due process as we seek to reveal official information — whether governmental or corporate — that the public has a right to know.” The ExposeFacts.org website goes live on Wednesday

Binney, a former high-level National Security Agency intelligence official, has been singled out for praise by NSA whistleblower Edward Snowden, who told the Wall Street Journal: “I have tremendous respect for Binney, who did everything he could according to the rules. We all owe him a debt of gratitude for highlighting how the Intelligence Community punishes reporting abuses within the system.”

Wiebe worked at the NSA for 36 years. Since retiring, both Wiebe and Binney have made several key public disclosures regarding the NSA’s massive surveillance program. As a senior policy analyst for the U.S. Environmental Protection Agency, Coleman-Adebayo became a whistleblower when the EPA ignored her complaints about a U.S. company harming the environment and human health in its vanadium mining in South Africa. Binney, Wiebe and Coleman-Adebayo are on the ExposeFacts advisory board. The first person to become a member of that board was Pentagon Papers whistleblower Daniel Ellsberg, whose video statement in support of ExposeFacts will be released at the news conference.

ExposeFacts will be an ongoing project of the Institute for Public Accuracy.The June 4 news conference begins at 9:30 a.m. in the Zenger Room of the National Press Club. Background information about the speakers is below. Journalists who wish to inquire about possible interviews for later this week can contact IPA Communications Director Sam Husseini at (202) 421-6858 or samhusseini@gmail.com, or can email IPA Executive Director Norman Solomon at solomonprogressive@gmail.com.

** William Binney is a former high-level National Security Agency intelligence official who, after his 2001 retirement after 30 years, blew the whistle on NSA surveillance programs. His outspoken criticism of the NSA during the George W. Bush administration made him the subject of FBI investigations that included a raid on his home in 2007. Even before Edward Snowden’s NSA whistleblowing, Binney publicly revealed that NSA had access to telecommunications companies’ domestic and international billing records, and that since 9/11 the agency has intercepted some 15 to 20 trillion communications. The Snowden disclosures confirmed many of the surveillance dangers Binney — without the benefit of documents — had been warning about under both the Bush and Obama administrations.

** Marsha Coleman-Adebayo, as senior policy analyst for the U.S. Environmental Protection Agency, became a whistleblower when the EPA ignored her complaints about a U.S. company harming the environment and human health in its vanadium mining in South Africa. Denied promotion, she sued and won a jury verdict finding EPA guilty of discrimination. Coleman-Adebayo is a founder of the No FEAR Coalition and EPA Employees Against Racism. Under her leadership No FEAR organized a grassroots campaign that won passage of the “Notification of Federal Employees Anti-discrimination and Retaliation Act” Coleman-Adebayo serves on the board of directors of the National Whistleblower Center and was inducted into the Project on Government Oversight’s Hall of Fame. She is an editor and columnist for the Black Agenda Report.

** Barbara Ehrenreich is the author of 20 books including Nickel and Dimed: On (Not) Getting By in America and Blood Rites: Origins and History of the Passions of War. A former columnist for Time magazine, she has taught at the UC Berkeley Graduate School of Journalism and elsewhere. She is on the board of trustees of the Institute for Policy Studies and the editorial board of The Nation. She is the founder and co-editor of the Economic Hardship Reporting Project. Her articles have appeared in many outlets including Mother Jones,The New York Times Magazine, The Progressive and The Wall Street Journal.

** Daniel Ellsberg is a former U.S. military analyst who served in Vietnam, worked at the RAND Corporation, and then risked decades in prison to release the top-secret Pentagon Papers to The New York Times and other newspapers in 1971 — thereby adding impetus to the movement to end the Vietnam War. Although Ellsberg faced espionage and other felony charges, the case against him was dismissed because of egregious misconduct by the Nixon administration. Ellsberg has been a strong supporter of modern-day NSA whistleblower Edward Snowden and convicted Army whistleblower Chelsea Manning. In 2006, Ellsberg received the Right Livelihood Award (the “alternative Nobel Prize”), and in 2012 became a co-founder of the Freedom of the Press Foundation.

** Norman Solomon is the founding director of the Institute for Public Accuracy and the author of a dozen books on media and public policy, including War Made Easy: How Presidents and Pundits Keep Spinning Us to Death. He is a former associate of the Center for Investigative Reporting. Solomon wrote the syndicated weekly “Media Beat” column for 17 years. His op-ed articles about news media and politics have appeared in most of the major newspapers in the United States. He is co-founder of RootsAction.org.

** J. Kirk Wiebe is a retired National Security Agency whistleblower who worked at the agency for 36 years. Wiebe’s colleague William Binney developed the ThinThread information processing system that, arguably, could have detected and prevented the 9/11 terrorist attacks. NSA officials, though, ignored the program in favor of Trailblazer, a program that ended in total failure with costs of billions of dollars. Wiebe and Binney blew the whistle internally on Trailblazer, but to no avail. Post 9/11, the NSA used ThinThread to illegally spy on U.S. citizens’ communications. Unable to stay at NSA any longer in good conscience, Wiebe retired in October 2001. Since retiring, Wiebe and Binney made several key public disclosures regarding NSA’s massive surveillance program.