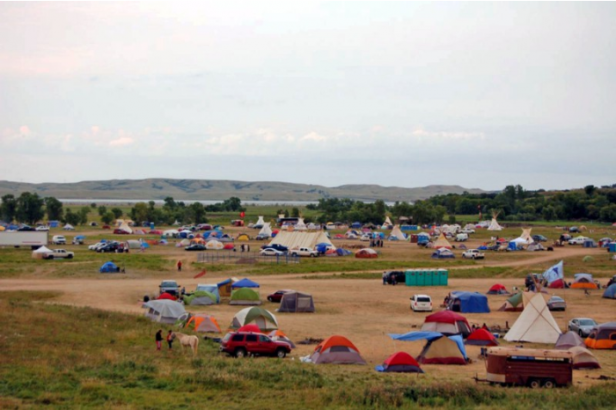 Earlier this year, ICN reporter Phil McKenna traveled to North Dakota to cover the ongoing Dakota Access pipeline protest. This is a behind-the-scenes look at what he saw there. Follow his coverage here.

When I first arrived at the camp of the Seven Council Fires in Cannon Ball, N.D. where more than 1,000 mostly Native American demonstrators had gathered to oppose the Dakota Access pipeline, I was completely overwhelmed.

It was a gorgeous late summer afternoon in a field filled with horses, tipis and headdresses. Tribal leaders from across the West — Navajo from Arizona, Yakama and Swinomish from Washington State — were addressing a crowd of hundreds who had gathered around the camp’s main fire. They had come to support the Standing Rock Sioux tribe whose reservation was uncomfortably close to the pipeline’s path and who had started this protest months earlier. They drew a flood of support from other tribes across the country.

I was, like millions of others have been, captivated by the spectacle of thousands of Native Americans camping on the open prairie united in opposition to a pipeline. Their outrage stemmed from what they believe is a threat to their culture and their lives, because the pipeline would pass through sacred sites and a spill could contaminate their drinking water.

Background: The Dakota Access Pipeline Fight: Where Does the Standoff Stand?

The seemingly spontaneous gathering appeared to be straight out of some bygone era. In truth, it was incredibly well organized, driven largely by social media and broadcast over its own live-streaming, solar powered radio station.

When I arrived, I tried to capture the scene all at once, taking pictures with a camera and two smartphones while trying to record audio on a separate recorder. I pulled out my laptop, then set it down to record a speech. Moments later, I discovered an 8-year-old girl I’d just photographed playing a game on my computer that I didn’t even know was on it. So much for bygone eras.

Moving beyond the spectacle of the camp itself, I found nearly everyone living in it had a tale of how government, industry or utility companies had encroached on, polluted, or otherwise desecrated their ancestral lands. Collectively, they’d had enough and Standing Rock was their line in the prairie grass.

The feeling at the camp was incredibly upbeat, a sense that this was an historic coming together of Native American tribes perhaps like none before. At the time of my visit in late August, dozens of tribes had passed resolutions, written letters or sent representatives to the camp, a figure that has since grown to more than half of the country’s 567 federally recognized tribes. Among the first to respond were members of the Crow nation who arrived with gifts of buffalo meat, blankets, and firewood. It was the first time they had entered a camp of the Lakota Dakota or Nakota nations (a group collectively known as the Sioux) in 250 years.

While much of the media attention has focused on the confrontation between demonstrators and pipeline security or law enforcement officials, what struck me most were moments of everyday life at the camp. I talked to kids from Washington state as they swam in the Cannonball River and snapped photos of Jerry Has No Horse, an Oglala Lakota teen from Allen, S.D. playing basketball on the camp’s hard packed earth.

I met a teacher from St. Louis who was starting a school for children at the camp, a school that North Dakota officials are now trying to shut down.

I also got the sense that for members of the Standing Rock tribe, this was a fight for survival. A pair of school superintendents from Fort Yates, the headquarters of the Standing Rock tribe, told of crushing unemployment, homelessness, suicides and, most recently, drug abuse that “threatened to bring the tribe to its knees.” A potential oil spill taking out their water supply was the last thing they wanted think about.

Yet tribal members are thinking a great deal about the pipeline, the prospect of future spills and what they can do to try to stop construction. On Tuesday, the Standing Rock tribal council passed a resolution that sets aside approximately 50 acres of tribal land for the construction of a semi-permanent winter camp. Other groups are now proposing to build hundreds of structures at the new site including tipis, earth lodges, and weatherized “tiny houses” powered by wind and solar energy.

When I was scouting a place to pitch my tent back in August I was advised to seek out a cottonwood tree for the relief its shade would provide from the scorching sun. Now it seems the camp is digging in for a much longer stay.

“We have been here for thousands of years, ” LaDonna Brave Bull Allard, a member of the Standing Rock tribe and a camp founder, said in a recent interview. “We’re not going anywhere.”